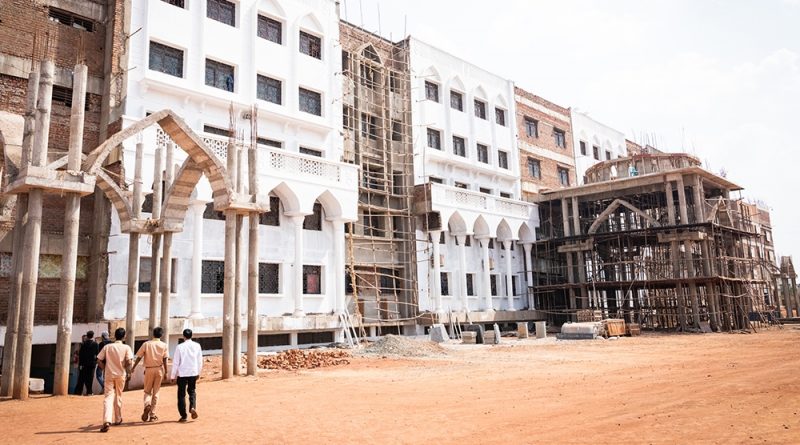 Bidar, India – A single mother, whose 11-year-old child participated in a play critical of a new citizenship law, has been arrested along with the school’s principal in southern Karnataka state, drawing criticism from activists and social media users.

Najumunissa and Fareeda Begum were arrested on January 30 on sedition charges – a non-bailable offence – triggering a debate on the misuse of colonial-era sedition law against people protesting against the Citizenship Amendment Act (CAA) passed last December.

The mother has been charged with abetting the use of abusive language, a police official told NDTV news channel. “She tutored her daughter to introduce fresh words that were not there in the original script,” the officer told NDTV.

The Bidar district police have interrogated students, aged nine to 12 years, of Shaheen Urdu Primary School several times in the past week over their roles in the play on the citizenship law. 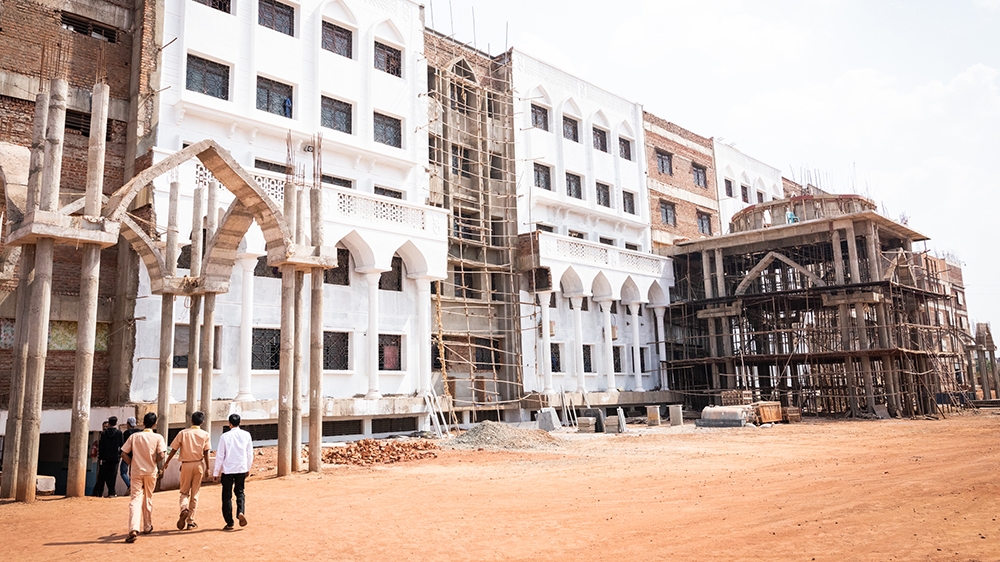 Though the police deny it, school authorities say the seven children who enacted in the play were questioned thrice.

Bidar school sedition case: The mother of the pupil and the head teacher arrested may not get bail till February 4. Youngest student cops questioned over play is 9 years old. @prajwalmanipal writes. #CAA_NRC https://t.co/kQibB6vqCX

“They wanted several children to be sent to the deputy superintendent of police’s office, but we refused, citing the provisions of the Juvenile Justice Act. They did not follow the guidelines while questioning children,” alleges Shaheen group’s CEO Thouseef Madikere.

“It was only after the visuals went viral that they started bringing officials from the child welfare department for subsequent sessions.”

The Amnesty India has asked the police to drop the sedition charges against Najumunissa and Begum and called for their release.

“The sedition law is excessively vague and broad which makes it an easy tool to stifle dissent and public debate. There is no good way to apply sedition,” it said in a tweet.

There is no good way to apply sedition.

🚫It does not comply with international human rights law.
🚫It violates the right to freedom of expression under the Indian Constitution.
🚫It goes against India’s tradition of tolerance.#BidarSedition

Activists and opposition politicians have described the CAA as divisive, discriminatory and against the country’s secular constitution.

The play was a small act of dissent mirroring the nationwide youth-led protests against the implementation of the CAA, coupled with the government’s plan to implement the National Register of Citizens (NRC) and the National Population Register (NPR).

The government says it has yet to decide on the implementation of NRC but protesters say NPR is a precursor to NRC, which could be used by the government as a tool to filter out millions of the country’s Muslim population.

The play was performed on January 21, following which a case was filed for words apparently spoken against Prime Minister Narendra Modi after a clip of the video started doing the rounds on social media. 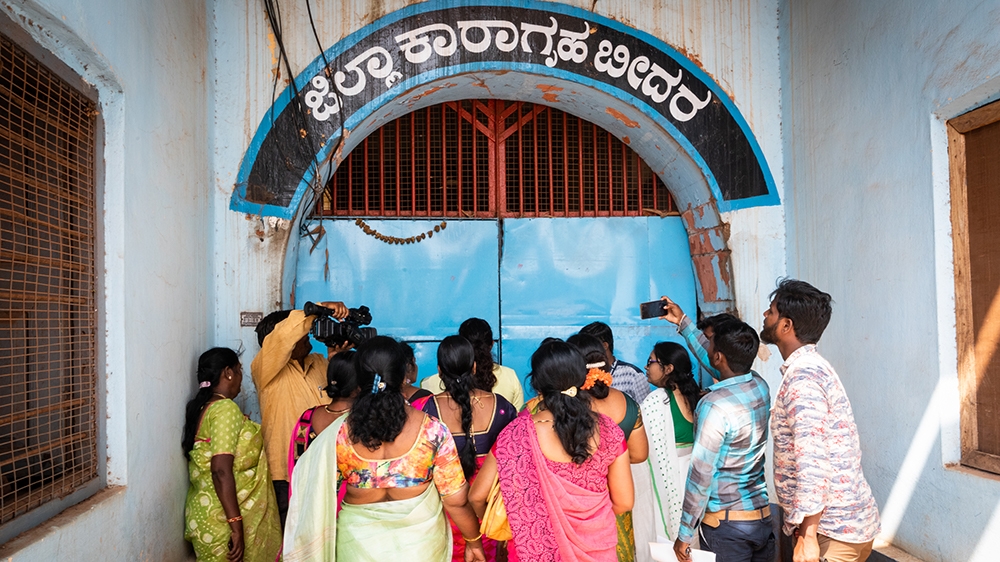 “Rats ate my papers, then cats ate the rats, which were in turn eaten by dogs. The local municipality took away the dogs, so my papers are already with the government,” two students appear to say in the video.

Seated among the audience that afternoon, when the play was staged on the annual day celebration of Shaheen English Primary and Secondary School, was local journalist Muhammed Yousuf Raheem.

He was live-streaming on Facebook the skit his son was part of. Raheem, who has since gone into hiding, may not have expected the video to go viral, and he was certainly not prepared for the consequences.

A local man identified by local media as Neelesh Rakshaal filed a sedition case against Raheem and the school at the New Town Police Station in Bidar, which sits close to Karnataka’s borders with Maharashtra and Telangana states.

The police claim it was Najumunissa who wrote her daughter’s lines and got her to repeat “jootey maarengey [we will hit you with shoes]” several times onstage.

The footwear brandished as a prop by the child is now part of the evidence gathered by the police. The two arrested women will be kept in custody at Bidar district jail till February 10, when a court is expected to hear their cases.

A single mother, Najumunissa had moved to Bidar from Hallikhed, a small village 34km (21 miles) away, with her only daughter.

The family’s main source of income is a farm they leased out. The daughter, who is now being cared for by their landlord, continues to attend school and nurtures ambitions of becoming a doctor.

Though a student of Urdu medium, she enjoys English poetry. She had participated in last year’s Republic Day celebrations, too, she says. “It was a play on the ill effects of the dowry system among Muslims.”

Karnataka Women’s Congress president Pushpa Amarnath, who was waiting outside the Bidar jail for permission to meet the women, told Al Jazeera that it is inhuman to arrest a single mother without making any arrangements for the child’s safety and wellbeing.

“Students from across colleges and universities in India are protesting,” she told Al Jazeera.

But DL Nagesh, Bidar’s superintendent of police, says the police do not have a choice but to file a case as per the complaint they received.

“We have to follow the Supreme Court’s guidelines in these matters. The complainant in this case mentioned deshdroha [sedition], so we had to file a complaint under relevant sections. It is only after investigation, when we file a charge sheet, that a court of law will look into the case.”

The Shaheen group based in Bidar runs 43 schools and colleges in nine states.

“The group had received a Karnataka state award for its contribution to education in 2013,” Shaheen group CEO Madikere said.

“Our school is multicultural. We have Muslims, Hindus, Jains, Christians and Sikhs among our students,” he told Al Jazeera.

“Nearly 50 percent of them are Muslims, so we thought it important to stage a play on an issue that affects the community at large.”

Babu Wali, a member of the BJP’s state executive committee from Bidar, accused the school of shirking responsibility after the controversy. “How is it possible that a big institution like Shaheen lets children come and mouth lines on the stage without any rehearsal before the principal or teachers?”

Madikere, however, does not regret staging the play against the CAA.

“Our children should be made aware of what is happening in society. How can we teach social sciences as part of our curriculum and ignore something like this Act? We could have avoided those particular lines in the play, but we have to raise awareness on NRC and CAA. There is discussion everywhere and there is fear among Muslims.”