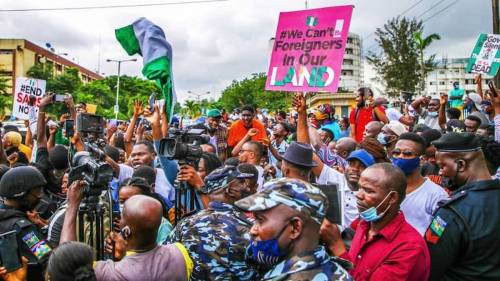 There was no date announced for the protests. It took off like a single match, then it became a box of matches, and then became a huge fire.

Many Nigerians live under the illusion that revolution is not possible. They think Nigerians are docile. That is lack of a deep sense of history. How wrong. These protests have proved that nothing is permanent but CHANGE, including change in human thought processes.

The protest has been wrongly defined a YOUTH PROTEST. No, it is a protest by Nigerians irrespective of age. Youths are more because they form the bulk of Nigerian population. It is also essentially a middle class uprising. Hardly can you do any successful small scale business in Nigeria today. Interest rate is 1.4 percent. Interest on savings is almost nil. They don’t want you to keep money in the banks,not even your profit, so many companies are moving to Ghana, Gambia and Kenya. Some are moving cash. Borders are closed without end.Middle class is providing the funds for the protests. Farmers are angry because they and their wives can’t go to farms because of armed criminals. They victims never get justice.

Though we all call it #END SARs protest, the demands are far more than that. #ENDSARs is just a slogan for the demand for the transformation of Nigeria from a ghetto society to an egalitarian society. They impose electricity tariff, nobody spoke, they increased fuel, nobody spoke. People in power feel they can do anything and get away with it. This is a stupid way to think.

The protesters are creating wealth by making service providers richer. Sharing of pictures and videos have tripled in the last 5 days raising revenue for online services running into billions of naira.

The protests broke the cobweb of Nigerian intelligence community: DSS, NIA, DMI had no hint else they would have issued threats. It shows they don’t understand the society they govern. Nigeria also has no thermometer to gauge the mood of the people. They really dont care. Govt should have seen this coming.

The protests are not concentrated in one place, making it more difficult for the security operatives to isolate and destroy.

In a decent society, the Inspector General of Police should have resigned.

The protest is not a vote against democracy. Let no mad soldiers think they can be funny. The protest is a vote for the deepening of democracy, the rule of law, against corruption, insensitivity and reckless leadership at all levels including corporate and financial institutions all out to exploit and kill all of us with their anti-people policies.

Just getting out of COVID 19, millions now earn half salary. Millions have been sacked; the government solution was to come up with fuel electricity hike in the midst of the pains and pangs. Haba!!! Many Nigerians are seeing death lurking around them. This can lead to anything.

The protest is largely by decent people. Let us hope the next protests won’t be by the ‘baddest’ men and women. The choice will be made by the government, either to to address the grievances or gloss over it.

If there had been NLC/TUC rally against fuel and electricity hike last week, these ongoing mass protests would not have taken place. It would have been a case of a massive protest led by labour because this same crowd was gearing up to be part of the Nation-wide protest. Labour did not gauge the desperate mood of the long suffering people of Nigeria.Labour lost this great honour. If any labour leaders try to address the rally, I tell you, they will be mobbed. The beauty would have been labour leading this protest backed with fundamental demands that could have enhanced greater transformation of Nigeria. That is lost.

These rallies have proved once again that the people are the custodians of power, the power to protest, the power of liberation is in their pockets, not in the hands of any leadership. In our quest for a better society, Nigerians are not the problem, the leadership is, either in government or within the liberation movements including labour. Nigerians can be effectively mobilized with the right people leading them on the route for a better society.

The power of social media in effective mobilisation has been enormous. Some 126 million Nigerians have access to the internet. Civil society, the media, state and federal government should learn this truth. Those who think Nigerian people are disorganised are mistaken. Every Nigerian is organised in one platform or the other. This rally has further confirmed this reality.

I was in VI and Alausa on Tuesday and at Gbagada today. I see organised groups. We should study these protests and take notes. Knowledge is often learnt everyday. The protesters are teaching us new lessons. All over history, the wo(man) on the street has always been the great teacher. Great politicians learn from the actions of the  people, their fears and aspirations, to be able to articulate their pangs in a development plan.

Without the traditional progressive movements, listen, Revolution can come in Nigeria. The nature, I don’t know. But it is sheer arrogance to assume that only a revolution led by already known people will be qualitative.

I’m not sure what will be the gains of the protests. I’m only sure the gains will be minimal for many reasons: No organized platform of leadership to negotiate with, no strategic leadership coordination for sustainability, no political platform to transform the energy into the quest for real, democratic society.

However, history has been made. I see more coordinated rallies in the future. I see more trouble. Let the operators of the system think. Let them act. Let them address hunger, poverty, cruelty of police and political leadership and the guzzling of public funds while millions of people live in misery. But will they ever learn?