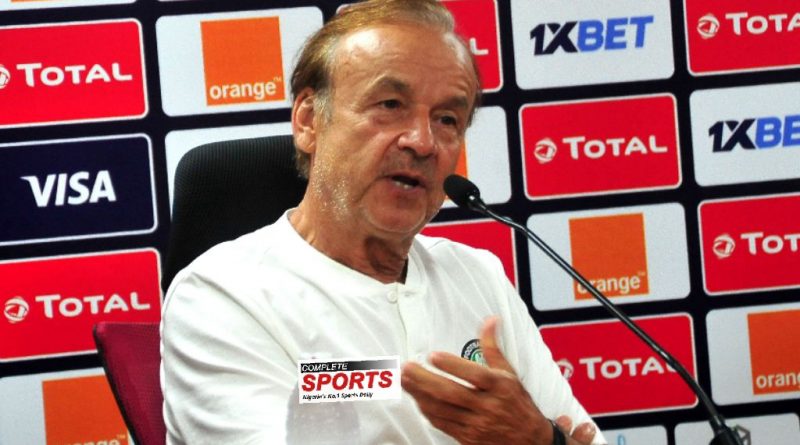 Super Eagles head coach Gernot Rohr says he will meet with top officials of the Nigeria Football Federation next month (February) to talk and agree a new contract, reports Completesports.com.

Rohr is currently at the tail end of the last six months of his current contract.

The NFF is ready to renew the contract of the German tactician, but it certainly won’t be a loose deal like the previous one.

The new contract terms will require that the former Bordeaux player and gaffer must live in Nigeria – Lagos or Abuja.

He will also be allowed to travel on vacation three times in a year. Also the coach will not get an improved pay from his $55,000 per month deal.

The NFF will also ensure, unlike in the past three years where he earned wages tax free, that his income will be levied.

“We will see the leaders soon. The meeting is planned for the month of February and possibly before the Africa Cup of Nations qualifying matches in March. We can agree on the new contract,” Rohr told Girondis33.com.

“I have been there for more than three years and it is long for Nigeria , because rarely can a coach be maintained as long . It was possible because the results were good, the team has evolved and that we accomplished the mission of rejuvenation.

Also Read – FIFA Ban: Why We Must Support Samson Siasia –By Complete Sports, Completesports.com and NaijaSuperFans.com

“It was planned and we managed to do it with young players including two that you know, who play for Girondins Bordeaux (Samuel Kalu and Josh Maja), and we have others in England, in Spain, etc. We no longer have a big star, because John Obi Mikel has retired. Victor Moses also retired for family and age reasons.”

“We managed to find a scorer in Victor Osimhen , and other playmakers; we have Samuel Chukweze who plays at Villarreal, the little Samuel Kalu from Bordeaux who plays very very well with us – one of the best every time he plays with Nigeria. So we have a very, very young, promising team, and I would like to continue.”

Rohr, who was appointed on a three-year contract in August 2016 and has been in charge of the Super Eagles in 39 games, with 22 wins, seven draws and 10 losses.