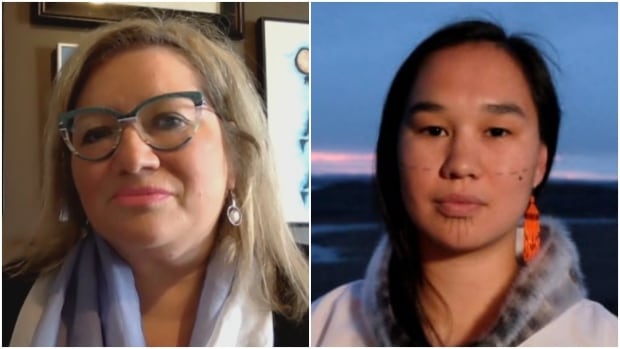 Labrador member of parliament Yvonne Jones is defending her ancestry after Nunavut MP Mumilaaq Qaqqaq reiterated her position that Jones is “not an Inuk,” and southern Labrador is “not an Inuit region.”

“I don’t think I have to prove my identity to her or anyone else in social media or in the public airways,” Jones told CBC TV’s Here & Now Thursday.

“I know who I am. I know who my grandmother and my great-grandmother was. I know what descent they were. I can trace my Inuit history in Labrador back to the early 1800s.”

Qaqqaq recorded a live video on Twitter on Thursday explaining her family tree, naming its members, and asking Jones to do the same.

“Where’s your bloodline? As Inuit … we don’t hide that,” Qaqqaq said in the now-deleted video, which, she said, Twitter removed from its site.

On April 16, Qaqqaq tweeted “Jones is not an Inuk” in response to a 2019 tweet from political blog Indigenous Politics that described Jones as such.

Following that, at the House of Commons on Monday, Jones demanded an apology from Qaqqaq, asking her to “stop committing racial erosion against her own culture.”

On Thursday, Qaqqaq refused to do so.

“I’m not going to apologize,” Qaqqaq said in the Twitter video. “I know, until I am proven otherwise, Yvonne Jones is not Inuk.

“Until you can tell me who your family is, and where you come from — and how you’re Inuk, and validate your Inukness — you have no space to say you’re Inuk. Stop saying you’re Inuk.”

Qaqqaq issued a statement Thursday evening, saying sorry for challenging Jones’s identity with “aggressive and disrespectful” comments, while also calling the origins of the NunatuKavut community council — the group Yvonne Jones is part of — into question.

My live tweets keep being taken down. Peoples identity matters. If Jones is willing to say she’s Inuk then as an Inuk she would not mind sharing her family tree – I call it a bush cuz we don’t have trees in the north 😊

According to its website, the NCC is “the representative governing body for approximately 6,000 Inuit of south and central Labrador.”

The non-status group was formed in 1981 as the Labrador Métis Nation, and changed its name to NunatuKavut in 2010, saying the latter better reflected its members’ heritage.

I’m a very proud descendant of white people — of settlers in Labrador — and of Inuit and I’ve maintained my culture from both perspectives.– Yvonne Jones

In 2019, the NCC signed a memorandum of understanding with the federal government around Indigenous rights for the group. That has led to a legal challenge from the two recognized Indigenous groups in Labrador.

“The NunatuKavut community council is not recognized as a part of Inuit Nunangat by any of the four Inuit regions or by the official organizations that represent Inuit Nunangat as a whole,” she said, adding she agreed with that consensus.

The four Inuit regions in Inuit Nunangat, the Inuit homeland in Canada, are the Inuvialuit settlement region of the Northwest Territories, Nunavut, Nunavik in northern Quebec  and Nunatsiavut in northern Labrador.

When asked Thursday whether she would respond to Qaqqaq’s request and publicly share her family tree, Jones said “absolutely not,” adding, “I’m not prepared to have a DNA test for her either.”

Jones said she would have been happy to discuss her ancestry with the NDP MP but Qaqqaq didn’t approach her before going on — what Jones called — the “attack,” using “racial slurs” and “lateral violence.”

“I’ve had … many conversations with people about my family history and my grandmother’s time suffering through tuberculosis … the years that my mom spent at residential school, what it was like to grow up in an isolated coastal community, what’s it like to practise a traditional way of life,” Jones said.

“I have always shared my culture, my history, my ancestry with anyone who’s wanted to have that conversation with me.”

Jones said she identifies with both white and Inuit aspects of her ancestry.

“I’m a very proud descendant of white people — of settlers in Labrador — and of Inuit, and I’ve maintained my culture from both perspectives,” Jones said.

Qaqqaq’s questioning comes “out of naiveté,” Jones said, and not understanding what’s acceptable to question when it comes to a person’s culture. Jones also said Qaqqaq did not understand how Nunatsiavut and NunatuKavut “interact.”