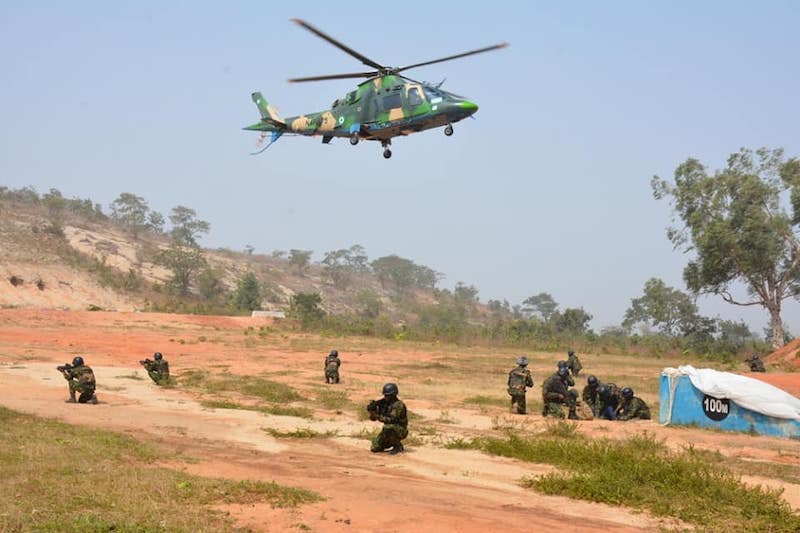 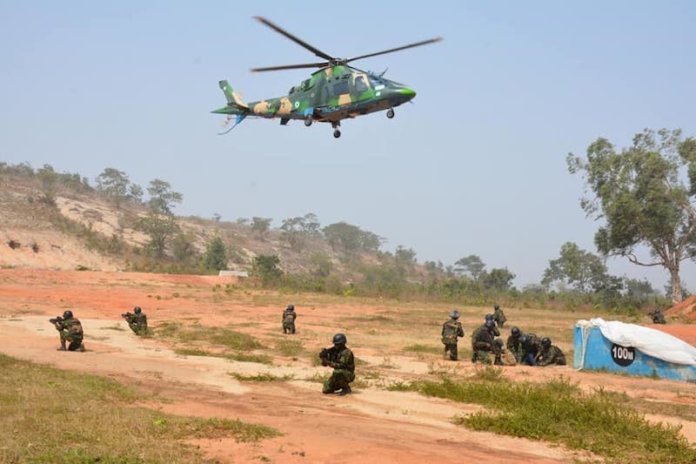 Troops backed by the Air Task Force of Operation Lafiya Dole, at the weekend, overran some terrorist camps in the North-east, killing over 60 insurgents. Coming after a recent visit to Borno State by the new service chiefs, the soldiers might have been buoyed by the visit.
The battle with the insurgents, however, triggered an exodus of refugees from four local government areas of Borno into Yobe State.

But the Northern Elders Forum (NEF), yesterday, called for the arrest and prosecution of any Fulani herdsman that broke the law. And the Christian Association of Nigeria (CAN) advised the federal government to seek assistance from the United States and Israel in the fight against insurgency.

The troops overran Islamic State’s West Africa Province (ISWAP) camps in an area straddling Yobe and Borno states in the North-east after a month-long military operation, the sources said.

The operations were on-going when President Muhammadu Buhari replaced his four top military commanders after months of pressure over his government’s failure to end the over a decade-long Islamist insurgency in the country.

On Wednesday, soldiers overran Dole camp, the last jihadist stronghold in the so-called “Timbuktu triangle”, the two military officers said.
“With the fall of Dole, the whole area is now under the effective control of Nigerian troops,” said one of the officers.

The jihadists have been in control of the area since 2013, when they seized it and established a strong presence especially, in the Talala area, which became the second largest ISWAP camp outside the group’s Lake Chad stronghold.

Last month, troops took over Talala after a fierce battle in which six soldiers were killed by a suicide bomber, who detonated his explosive-laden vehicle among troops, military sources told AFP.

“It was a tough battle,” said the second source on the Dole raid, noting, “The route leading to Dole was mined by the terrorists and troops accessed it on foot, engaging the terrorists in fierce battle with air support.”

Several hostages were rescued from the camps while dozens of vehicles seized from kidnapped hostages were recovered, the sources said.
Two high profile ISWAP commanders, Modu Sulum and Ameer Modu Borzogo, fled along with some fighters during intense fighting while other commanders were killed, said the second source.

Escaping fighters were believed to have fled to Lake Chad, which straddles Nigeria, Chad, Niger and Cameroon, where the group maintains camps on the islands dotting the freshwater lake, said the two military officers.

In another front, troops reclaimed five camps from the jihadists in Kidari, Argude, Takwala, Chowalta and Galdekore villages, where the jihadists used suicide bombers to try to stave off troops advance.

“We lost some soldiers and several were injured in the suicide attack but the soldiers managed to subdue the terrorists,” said the second source, without giving details of the casualties.

Visiting the troops after they killed no fewer than 60 Boko Haram terrorists in a weeklong operation codenamed, Tura Takai Bango, Yahaya made the call during his operational tour of military formations to commend troops fighting in Bama axis, Pulka, thrusting into deep Boko Haram and ISWAP camps and enclaves in Sambisa Forest.

In recent weeks, the troops had crushed terrorists, who attempted to invade Gamboru Ngala and also stormed “Timbuktu Triangle”, a notorious enclave of Boko Haram in the heart of Sambisa Forest.
The visit of the commander came on the heels of the visit of the new service chiefs led by the Chief of Defence Staff, Major General Lucky Irabor. They had visited the theatres of war, military formations and commanders and were briefed on the state of affairs in the general area.

In an interview with THISDAY, spokesperson of NEF, Dr. Hakeem Baba Ahmed, cautioned against allowing ethnic militias to assume the role of law enforcement agencies, because it might lead to anarchy. Ahmed, who said the increased agitation in the country was evidence of failure in governance, called on well meaning Nigerians to speak against the growing insecurity.

He said any Nigerian, irrespective of tribe or religion, deserved the protection of the state, adding, “We must be free to live anywhere in the country. If the state is unable to protect the Fulani and the community that they’re living with and known to them for decades, then, they should come back home where maybe they will be safer.”

Ahmed said, “But we are not asking anybody to leave where he or she is to come home. We are saying Nigerians should be protected wherever they are. Be them Fulani or Effik or Itsekiri, or Igbo or Yoruba, everybody needs to be protected.”

He argued that nobody was above the law, stating that the Fulani, like any other Nigerian that commits an offence, should be arrested and prosecuted.

He said,“They should be arrested. We know that there are criminal Fulani elements among the Fulani people just as is the case among other ethnic tribes. We know that in the North, like in any part of the country, there are also the bad eggs.

“Our position is that they should be arrested, tried under the law of the country. The Nigerian state must not allow anybody to get away with criminal activities – whether they are Fulani or Yoruba or Igbo. Nobody should be seen to be above the law and this is important.

“Arrest any Fulani man if he breaks the law. Arrest him but don’t tell innocent people that have not been identified with any crime to leave where they are. If they have not broken any law and they have not violated any law, you don’t have the right to tell people to leave a place if they are living there lawfully and legally. This is wrong. This is our position.”
Ahmed called on patriotic Nigerians to speak up against emonization of any Nigerian anywhere on account of tribe or religion.

According to him, “The immediate thing is that we want all Nigerians with responsibility to speak up, to come now. We need to assure people that Nigeria is safe for everybody. We need to stop all this terrible rhetoric that is tearing everybody and community apart. We need assurances that they are safe, whether you are at home or in somebody’s home. Nigeria must be protected.

“Second, we need to look at why we have this kind of quarrel now, when we have been living in the past peacefully. This is a country that accommodates all of us and provides for all our needs. Why are we fighting over pieces of land; fighting each other as if we are just strangers.

“What is the problem? We need to know? Is it that the Nigerian state is failing us or we failed to resolve those problems that come out every once in a while? Whether it is between the same ethnic groups or different ethnic groups that have been living in the past, the Nigerian state has the capacity to provide resolution, to enforce the law, to deal with violations of the law.

“Unfortunately, in the last few years, something is wrong or has gone wrong or is it that Nigerians have failed to deal with the people that are taking the laws in their own hands? What you are seeing happening now is the reflection of the failure of the Nigerian state.

“We are assuming powers that are not ours. It is the government that should deal with criminals whether they are Fulani or not. Why are communities now exercising that rights of the state by exercising that power to eject people?”

On whether a sovereign national conference was the answer to the problems facing Nigeria, Ahmed declared, “I don’t know about sovereign conference. What we recommended so many times and we are still recommending is that Nigerians should sit and discuss with or without government’s approval to discuss what is wrong with Nigeria.

“We don’t need the approval of the federal government to sit down and discuss and right now, I am telling you we are actually reaching out to each other from the North to the East and South, we have a forum where we talk and we are reaching out to elders and leaders, who are responsible to try and bring down the temperature.

“We are in a very dangerous state and we do not need the approval or the consent of the government to discuss what is wrong with Nigeria, but if we can do that with government, that is even better because the government has law behind it, the agencies behind it to assist Nigeria to be a little bit more secure where we live.”

CAN Advises FG to Seek Help from US, Israel

The Christian Association of Nigeria (CAN) Saturday asked the President Muhammadu Buhari government to seek help from Israel, United States and other countries in the fight against insurgency, banditry, kidnapping and other violent crimes in the country. The apex Christian body said the idea had become necessary because the country appeared overwhelmed by the continuous security challenges.

President of CAN, Dr. Samson Ayokunle, made the call in Abuja during the inauguration of the new national chairman of CAN’s Youth Wing (YOWICAN), Belusochukwu Enwere.
Ayokunle said CAN was seriously worried by the persecution of Christians, who were affected by the security challenges in Nigeria.

The CAN president, who was represented by Assistant General Secretary of the association, Apostle Biodun Sanyaolu, said, “It is very obvious that Nigeria needs assistance. I’m not President Muhammadu Buhari, but I’m sure that he will be worried as well. He should be willing to seek help from anywhere, because insecurity has reached a worrying point where nobody is safe.

“We need help. Let me use the opportunity to tell the president to reach out to Israel, United States and other countries that could be of help to Nigeria. The problem of insecurity is becoming overwhelming.

“The insecurity, banditry, and kidnapping are against the human race. We are seriously worried in CAN, because we are affected by the security challenges in Nigeria.”

Ayokunle said the CAN leadership had spoken against the security challenges many times and it did appear that it was too overwhelming to the present government.
“We will continue to pray for the government, because there is lack of security everywhere – from Adamawa to Lagos, Sokoto to Enugu – the highway is not safe.