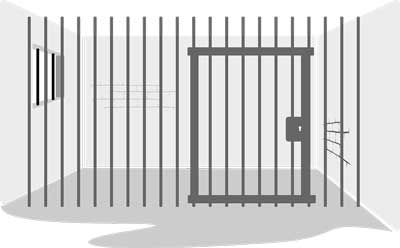 If you know someone who has been incarcerated in a prison facility, you may be wondering how you can get in touch with them. Surely you know you can write letters to prisoners, but it can be rather confusing how exactly you go about that.

In this article, we will give some short and simple tips on finding an inmate and what you’re allowed to send them, as well as other tips on staying in contact with a prisoner.

How to find an inmate

If you know of someone who is in prison, but you don’t know what correctional facility they are incarcerated in, there are a few ways to find them.

If you know what state prison they’re held in, for example if you know the prisoner is being held in California, you can search him across California state prisons using publicly available inmate databases.

As there can be many “John Does” in prison, you should search using as much information as you can provide, including DOB, and be able to identify them from mugshots. This should give you the inmate’s booking number.

Once you know where the prisoner is incarcerated, you can visit the jail’s website which should provide you with the jail’s specific rules on visitation and sending items to prisoners.

What can I typically send to a prisoner?

Letters are the best and safest things to send. Prisons typically require that you write in either pen or pencil, and do not include anything like staples or paperclips. Do not spray any perfume or fragrance on the letter. Furthermore you should not write or draw anything that can be interpreted as secret code.

Anything that can hinder the correctional staff from sorting and inspecting mail, such as envelopes sealed with tapes, will likely end with the mail being discarded and not given to the inmate.

We can only give general guidelines for what most prisons allow, so it is best to check with the prison information on what exactly they do not allow.

Sending photographs to a prisoner is generally allowed, and it’s best if the photographs are of happy childhood or family moments. Under no circumstances should you send inappropriate photos to an inmate, as they will be confiscated.

To the surprise of many people, you typically cannot send books directly to a prisoner. Many prisons require that books be sent directly from the publisher or vendor, such as Amazon or Barnes and Nobles. The books must be newly sealed and in paperback format. Used books are not allowed, especially hard books as they are considered a weapon.

Many prisons adopt this stance because books have been used for relaying coded messages, or even used for smuggling drugs. California officials said there was an increase in book pages being soaked in synthetic drug chemicals.

Incoming calls for inmates are typically outright disallowed, so the prisoner must make outgoing calls. Prisoners can use prepaid phone accounts, or make collect calls to landline phones.

Accepting collect calls from long distances can be expensive. In recent years the FCC has stepped in and capped fees and surcharges that prisons were placing on prisoner phone calls, bringing the nationwide average to around 21 cents per minute for many state prisons.

Scheduling visitation with a prisoner

You may choose to schedule visitation time with a prisoner, but be sure to thoroughly read the facilities rules and strictly follow them. Most prisons have strict dress codes, and may have no-touch policies which means you cannot hug or even handshake the inmate.