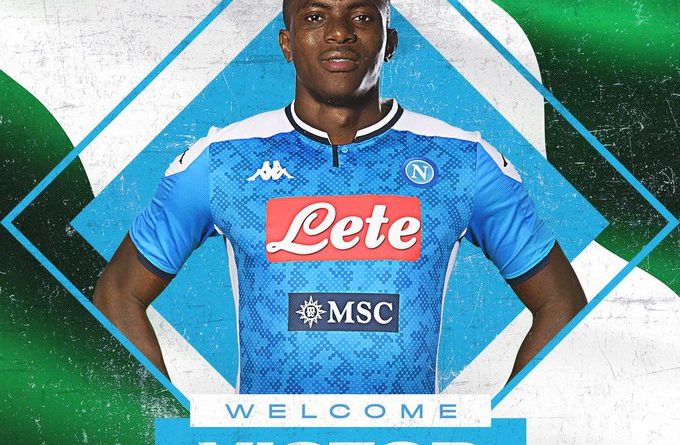 Reactions have trailed Victor Osimhen’s record-breaking move from French Ligue 1 side Lille to Italian Serie A side, Napoli.

The transfer which was not without hiccups was made official on Friday with Osimhen joining Napoli on a five-year deal worth 80 million euros-including add ons.

The fee paid makes him the most expensive African star ever- eclipsing the amount Arsenal paid to sign Nicholas Pepe from Lille last summer.

Osimhen will also reportedly earn 4.5m euros annually throughout his five-year stay in Naples. It’s a remarkable feat for a player who struggled at Wolfsburg and had his career threatened due to malaria.

Following the record-breaking move, a host of people including Nigeria’s number one citizen, President Muhammadu Buhari, have reacted to the transfer.

I celebrate today Victor Osimhen, Nigerian Professional footballer for the height he has attained. His recent exploits and signing signposts the boundless natural talents and brilliance of our youth if given the opportunity to showcase. Victor, a true Nigerian brand !

Moving to Napoli and a playing in the Europa League is a good deal for Victor Osimhen. The money is also very cool.

How do you rate Victor Osimhen’s chances at Napoli? pic.twitter.com/ftBQgNSqNF

🎙 De Laurentiis: “What impression did I have of Osimhen after our meeting in Capri? Wonderful, he immediately fell in love with Naples”. (@SkySport) pic.twitter.com/YYdPncRvAz

🎙 De Laurentiis: “What impression did I have of Osimhen after our meeting in Capri? Wonderful, he immediately fell in love with Naples”. (@SkySport) pic.twitter.com/YYdPncRvAz

Victor Osimhen Story is touching and so inspirational with hope and Faith ❤️🙏🏽!

– Boy started from nothing and so close to breaking the record for the most Expensive Africa player.
– Deal 98% done, just for Napoli to agree final terms with Lille. €80m 🤝

Osimhen coming to this Napoli side under Gatusso surely will turn some heads towards Serie A.

De Laurentiis (Napoli’s president): “We had meetings with Fali Ramadani (Jovic’s agent) and we could’ve signed Luka Jovic or Azmoune from Zenit, but when there was an opportunity to sign Osimhen, we went all out for him instead”. #rmlive pic.twitter.com/L9D8dPOqMu

The Super Eagles striker scored 18 times in 38 games in his only season with Lille, and he will be hoping to do more when he puts on the Gli Azzuri shirt.

Osimhen is currently in Lagos but will link up with his new teammates after their post-season break. Napoli finished their Serie A campaign on Saturday, but they still have a Champions League round of 16-second leg tie against Barcelona.