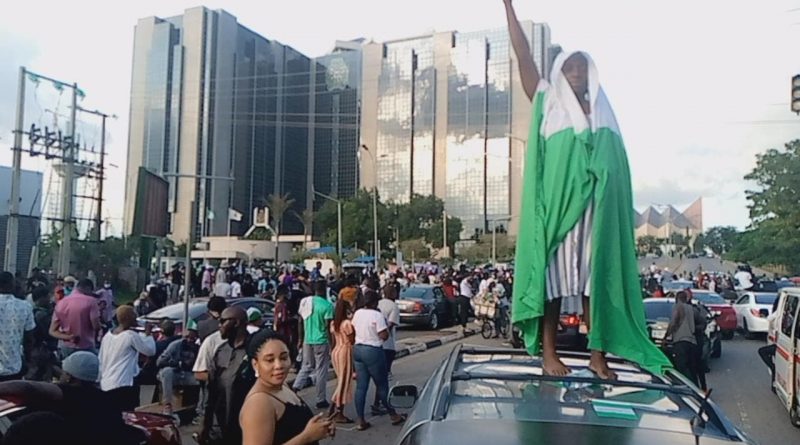 My 14-year-old daughter had this to say when the End SARS protests broke out, “thank God! At last!” While I was still reeling from the shrewd observation, in that subconsciously pejorative way elders bristle at the unsolicited wit of the young, my nine-year-old son dropped his own two cents of wisdom on the table – “Nigeria has zero security.” When pressed to educate us further, he shrugged, “it is very obvious, poor everything.” In that moment, I did a quick calculation. Four years from now, my daughter will be eligible to vote and in nine years, the young man will turn 18, also ready for the ballot box.

A demography on the margins, watching, waiting, and being shaped by the realities around them. Like the generation of youths on the streets, demanding change, the so called twitter generation that supposedly are lazy and do not swing the ballot boxes in any meaningful way, the young are saying to the old guard, myself included: respect is not subservience, we see you, we know what you have NOT been doing, wake up or you’re history. My 25-year-old niece who is also on the front lines of the protest, read me the riot act by instructing me to rise from my arm chair analysis and join the movement in some meaningful way. We agreed that I would provide funds to support the feeding of many but, more importantly, that I would observe and learn without generational bias.

From the awakening of the young in my own home, to the massive number of youths on the streets across the country, demanding to be respected and to be taken seriously as human beings, as members of a civilized society nurtured rather than brutalised by their supposed protectors, I applaud your courage for stimulating this moment of reckoning. You have made a movement out of many moments of pain that passed in silence.

One would be hard pressed to find a Nigerian that has not been affected by SARS or police misconduct more broadly. Directly or remotely, we all have connected experiences. Mine are still vivid like it was yesterday and not years ago. But my aim here is not to add to the heart wrenching experiences many have bravely shared and continue to. Demands have been put forward and recommendations offered. The president has been called to act

While we await the direction of policy, we must also reflect on how to shape policy beyond elected officials. The systemic failures of governance both in the police and in the country at large, needs a formula that lasts longer than electoral cycles and individual responsibility of any one person – president or politician. What we are attacking, is a cancerous system that needs to be new rules that cannot be circumvented by the schemes of a new political class at the turn of every four years.

Cast your minds back to 2013, during the Goodluck Jonathan administration. Channels Television did an investigative report on the inhuman conditions at the Nigerian Police College, Ikeja in Lagos State. The bastion of national security training was in the shadow of infamous prisons. The television station decided to temper its harrowing revelations with action and launched a fundraising project to rehabilitate the Police College. The private sector and other Nigerians with means, rose to the occasion only to be deflated with accusations of a political smear campaign.

While poor welfare conditions is no longer a plausible excuse for a rogue police force, the officers, their leaders, the politicians above them and most importantly, the system of disorder that allows a free for all use of force to persist, must be called into question. What we should aim for, is to generate an uncomfortable seat for the next round of leaders. If one administration ignored the memo, and the current one pretends it got lost in the wind, the forthcoming will be greeted with a crown of thorns that will enforce a policy transformation.

We can only hope that this administration finds the memo and reads it with keen interest rather than dismiss it as the unsolicited wit of the young and restless. This is an opportunity for the Buhari administration to put itself on the right side of posterity by adjusting the ignorance of previous administrations. The Federal and state governments cannot claim blindness at the police excesses, the flagrant culture of bribery or the complete lack of proper revenue allocations (and monitoring of those allocations) to the police force. Actually, make that the whole security gamut because the army have their tales of neglect and abuse of power.

Therefore, my yearning is that the government will partner with the youth in the new Nigeria project for good governance and a better tomorrow based on mutual respect and shared values. The Police recruits too are youth and deserve a better deal. This is an opportunity not a problem. The planned reforms can also generate employment and make the Nigeria police force better equipped to face the challenges of crime prevention and arrest in the twenty first century. An enduring reform is not the sole preserve of the Inspector General of Police. He is a part of the system that needs transformation. When the ailing structure is rehabilitated, individuals will find it harder to manoeuvre their private interests.

This is where the Minister of Police should speak up and take charge at the behest of President Buhari. I wonder how many Nigerians are even aware of the existence of a Police Affairs Ministry or who the minister is. Someone must take responsibility not just for the sake of appearances but for real change to occur.

Currently, there are no technological linkages between the various police formation from the Police outpost to the Force headquarters. I will recommend  a deployment of a police trained photographer or forensics to capture all related crime reports and finger prints which will be instantly uploaded to the cloud. This will make it easier for data collection and the setting up of central collection system of crime detection. It sounds like a pipe dream, I know, but it is not impossible.

At the heart of these protests is the age old tension between generations. The exclusion of the youth from politics can no longer be ignored. A grandfather as youth leader in most political parties  is laughable. On the one hand, young people are denigrated by the old, dismissed as disrespectful and lazy. On the other hand, they are invited into politics as electoral thugs to cause mayhem or as token participants without real influence or a seat at the table of decision making. Are we truly surprised that they have created a seat for themselves on the streets?  Change is inevitable. Change is now.

Esele is the former president of Trade Union Congress of Nigeria  and Petroleum and Natural Gas Senior staff association (PENGASSAN).