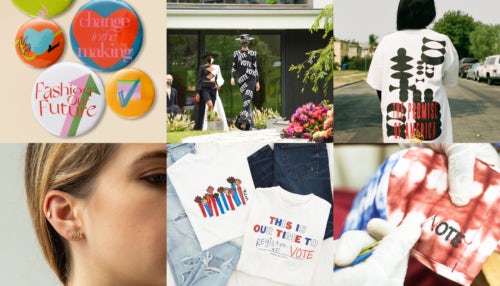 Fashion labels ranging from Pyer Moss to Studio 189 have released products on the theme of voting. | Source: Courtesy

If it were up to the people who work in fashion, Joe Biden would win in a landslide. Less clear is what the industry’s leaders want. If a Biden administration quickly passes an economic stimulus package, brings the pandemic under control and supports an orderly distribution of a vaccine, it will boost the industry’s fortunes across the board. Executives are probably less enamoured with Biden’s proposal to raise the corporate tax rate, and some brands and manufacturers may be dreading new labour and environmental regulations.

We still have to get through election night itself, of course. A close election could mean weeks of vote counting and legal wrangling before a winner is determined (and some fear Trump may dispute the results if he doesn’t like the outcome). Retailers are preparing for the worst, with some boarding up stores in major cities and taking out insurance in case stores are damaged during civil unrest.

The Bottom Line: The election will almost certainly be a referendum on which candidate is better equipped to tackle the pandemic, and that’s how fashion is likely to view it too. Until Covid-19 is brought under control, fashion cannot thrive. 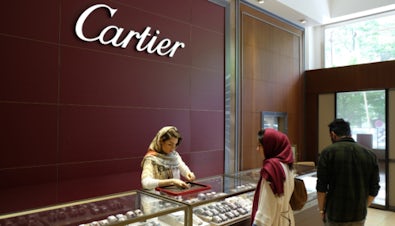 Cartier and other Richemont brands will face tougher competition from an LVMH-owned Tiffany | Source: Getty Images

Richemont appeared to have dodged a bullet for a moment there, when LVMH appeared ready to walk away from its acquisition of Tiffany. That deal is back on, and once completed will give the Swiss firm a true global rival in the jewellery market for the first time. Richemont has plenty of other challenges: its shares are down nearly 25 percent this year, compared with a 3 percent dip for LVMH, reflecting expectations watches and jewellery will take longer to recover from the pandemic than fashion and leather goods. The company’s problems – including the rise of smartwatches and its troubled fashion and YNAP units – predate the pandemic, however.

Industry figures show strong demand for watches in China, but dismal sales virtually everywhere else. Richemont clearly sees its future in Asia; it’s no coincidence that Watches & Wonders, where the company’s brands show off their newest creations, was moved to Shanghai this year.

The Bottom Line:  Richemont’s approach to e-commerce is another element to watch this week. Though  the company owns Net-a-Porter and Watchfinder, a resale platform, many of its brands are loathe to sell five- and six-figure watches and jewellery online. The pandemic has forced luxury brands of all types to rethink their approach, and competition from an LVMH-backed Tiffany is sure to spur innovation as well. 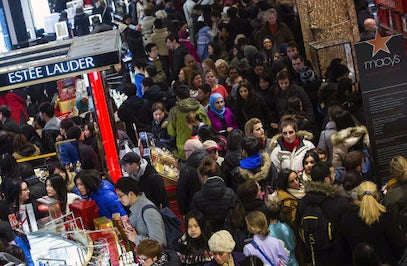 The first “Black Friday” sales started appearing in consumers’ inboxes in mid-October, more than a month before the all-important retail holiday. But it’s in early November when the promotions start to kick into high gear. Retailers have their work cut out for them to salvage the all-important holiday season. A National Retail Federation survey found consumers plan to spend about 8 percent less on gifts in the weeks leading into the holidays — but 28 percent less on themselves.

That only partially explains the particularly early and aggressive promotions this year. Retailers are also gaming out ways to spread orders over a longer period to avoid holiday shipping delays. They will try anything that shifts orders away from the busiest shipping periods, when they’ll have to pay as much as $2 more per package.

The Bottom Line: The rapidly worsening pandemic at least gives retailers some clarity about how the rest of the holiday shopping season is likely to play out. With cases spiking and lockdowns looming, they can bank on a hefty portion of spending taking place online rather than in stores.