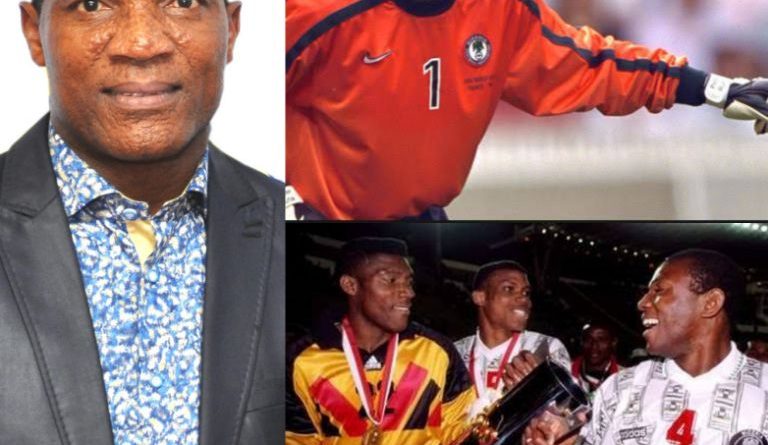 Peter Rufai has exclusively revealed to Complete Sports’ SAB OSUJI that he went to the France ’98 FIFA World Cup finals straight from a disco night club in Madrid.

Rufai who is called ‘Dodo Mayana’ said he had been frozen out of the senior national team set up at the time and as a result he was no longer expecting any call up for the global football fiesta.

“I was playing for Deportivo La Coruna at that time,” starts the former Super Eagles captain. “I was literarily frozen out of the national team for reasons I do not know. Though I later discovered there was news circulating back home then that I wasn’t playing for La Coruna again.

“So, when the season ended, I decided to travel to Couba for the summer holiday along with some friends from Real Madrid, Barcelona and Deportivo. But while we were still in Madrid, in a Night Club, the biggest in Madrid, Disco Tech, enjoying ourselves, I never knew fate was still holding some cheering news for me.

“Because it was off season, discipline and protocol off, we decided to fly like the bird. But in the morning, on the day we were to travel, I received a phone call from the Nigeria Federation (NFA) then, asking me to ‘report with immediate effect’ in Switzerland where Super Eagles were camped preparing for the World festival of football in France.

“At that point, I decided to call my parents back home in Nigeria on the ‘sudden’ Super Eagles invitation, my parents said to me, ‘Peter, obey before complain’. So, instead of traveling to Couba, which I had already bought the ticket, it was straight to airport from the Disco hall and off to Switzerland”.

France ’98 was Rufai’s second World Cup finals duty for Nigeria, having been part of Nigeria’s debut appearance in USA ’94.

With six Africa Cup of Nations final appearance behind his belt, Rufai reckons that he was a child of destiny given his national team circumstances. “I see it all as the handwork of Almighty God and the Nigerian fans. Call it destiny or that I’m a destiny child. This so because, if it were left for the Super Eagles coach alone, I wouldn’t there. But because the design was of God and the good people of Nigeria backed me up when they say they want Peter Rufai. When they thought every hope was lost, I was not there, my name will still spring up and I would surface again.

“When it looked like a foregone issue that I wasn’t going to be in the France ’98 World Cup bound Eagles, I still came up. This was exactly my scenario in the Eagles. When I look back at it, I say God is indeed great. But come to think of it, I was the longest serving goalkeeper Nigeria ever had.

“During my time, I spent 15 years, almost two decades in Eagles and all through this period, I was Super Eagles No.1 goalkeeper and I even captained the team.

“You can see the scenario again, even when I was playing for a team like Deportivo La Coruna, they still ignored me but God stepped in. Destiny beckoned even when I had seemingly lost hope of going to France ’98 World Cup, when I had bought ticket to go to Couba for summer holiday, they called me and said, ‘report with immediate effect. That really showed that I’m a child of destiny”.

Dodo Mayana disclosed he’s a double Prince, both from his family in Idimu, Lagos and from his maternal place in Rivers State. He equally hinted that he nearly gave up on his goalkeeping career.

“That was in 1977. I was in Sharks then, though at a tender age and student of Government Vocational Trade School, GVTC, Port

Harcourt. Sharks had goalkeepers Raymond Qacoupume and Emma Yellow and Dennis Fente at the time.

“But at a point, there was kind of goalkeepers crises in the team probably on account of injury. I was in school and they sent for me because they had a match in Kaduna, a league match. During the game, I picked an injury as a result of aerial collision and when I was eventually treated, I decided not to continue the match. I said if this is how the game is, I won’t play again.

“But the players came together, pleaded that I should continue and that its all part of the game. I later succumbed to their pleadings, otherwise, my mind was already made on quitting the game”. Recalling how his career started and blossomed, Rufai revealed that he started off as a midfielder.

“That was in Port Harcourt. I was a midfielder, defensive midfielder. But during a match, our goalkeeper kept on conceding goals and when we chided him after conceding the fifth goal, out of anger, he pulled off his kits and flung it that any other person could come and keep. At that time, scoreline was 5-4 against us.

“I caught the jersey and took over. At last the match ended in a draw. And from that day, the players decided I should be the one to be keeping for the team. That was how my goalkeeping career started”.

“When I arrived the screening ground, I was told to undress and put on my kits. I was still wearing my school uniform and my Christmas shoes. I told them that I was going to play with my shoes and uniform (white shirt) on. And at the end, I was selected. Stationery Stores manager went and bought a pair of goalkeeping gloves, keepers jerseys for me.

“He also took me to a hotel, telling me that was where I would be staying and coming to training from. He also showed me where I would be eating food. That was how my professional football career started.”