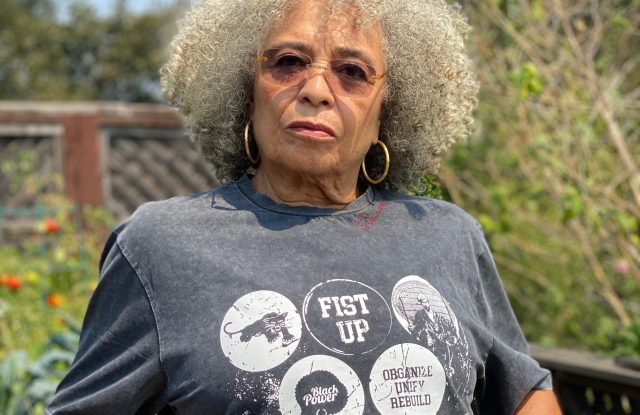 Angela Davis has assumed many titles in her long and storied life, including activist, academic, author and honorary doctor, but what about fashion designer?

Davis and Los Angeles-based label Renowned LA on Friday launch an apparel capsule inspired by the Black Panther Party and its cofounder Huey P. Newton, as well as Black political leaders that appear on the apparel, including Davis herself.

Launching for pre-order at 12 p.m. EST, the capsule includes a T-shirt for $35 and a hoodie for $75, both featuring the images of political leaders and logos, the word “dismantle” embroidered on the shirt, and the phrase “We Not Asking No More.” The pieces will be available for preorder through December 18, and a portion of the proceeds will go to Underground Grit, an Orange, Calif.-based organization centered on prison reform and decriminalization for incarcerated people and youth, and Dream Defenders, a group created to end police, prisons and privately-owned prisons (Davis is a member of the board of Dream Defenders).

“I’m extremely humbled that she even agreed to do something like this. I don’t think she’s done anything like this before when it comes to fashion,” said Renowned LA founder John Dean.

Prada used an illustration of Davis by Trina Robbins for a spring-summer ‘18 T-shirt and coat, which many on social media frowned on. One user tweeted how Davis is an anti-capitalist and therefore would not want anything to do with the $500 T-shirt or $1,700 item bearing her image. Miuccia Prada said contemporary politics and the women fighting for change inspired the collection. Prada worked with the artist on the pieces.

But how does a designer convince a career activist, who campaigned against the Vietnam War and is active in feminist movements, is an author of 10 books, delivered addresses at universities and movements such as Occupy Wall Street and has songs dedicated to her by the Rolling Stones and John Lennon and Yoko Ono to work with him? Easy for Dean—the convincing was through fashion.

“I released my ‘Heroes of Blackness’ T-shirt this summer, and a friend of mine said he could send a tee to Ms. Davis,” said Dean. “I said I don’t know, because it’s her friends on the T-shirt, but he sent it and she wore it and we set up a Zoom call to just talk.”

Dean released a number of limited-edition styles this year, including a “Hands in the Sky” T-shirt with Unknwn, which was a special moment for the Akron, Ohio-native who shares a hometown and high school alma mater with LeBron James.

Davis trusted Dean to implement his ideas and produce the works and to keep her updated. Her one ask for the partnership was for her to pick the organizations that the sales of the tee would benefit.

“I was nervous,” said Dean. “It was like talking to a unicorn!” Dean said much of their conversation was about the project, but they conversed briefly about politics. “I didn’t want to consume too much of her time.” 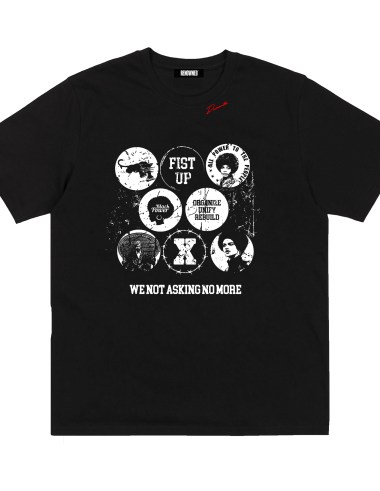 He did ask her about the current state of country, specifically how things seemed to revert back to the status quo. That protests and calls to action are behind celebrity chatter and seemingly no longer are at the top of mind for society, which affirmed this summer that they would be fighting for equality and looking within to change.

Dean said, “Everyone has gone back into the status quo and she agrees and said that’s what they do. Protesting is step one, but what happens when protesting is done is when the real fight begins.”

Many in the U.S. and around the world took to the streets to protest police brutality and the police killings of George Floyd and Breonna Taylor, the latter of whom became a social media hashtag with the demand for justice. But the three officers — Brett Hankison, Jonathan Mattingly and Myles Cosgrove — were not charged for her death. The protests continue today, but with little to no fanfare or media attention.

Dean wanted to honor Floyd, Taylor and the many Black victims of police brutality, racial injustice and violence in a red hang tag that, according to Dean, “has as many names as I can have in the space.”

“I wanted to create something physical as a way to honor and keep their names alive,” he continued. “I hate that it has to come at that expense. Someone had to die for us to do this.”

The honoring of deceased Black people killed at the hands of the police or race violence is ongoing. December 4 was Fred Hampton’s birthday. Hampton was one of the chairpeople and most influential members of the Black Panther Party. He was assassinated in bed during a raid, which was later ruled a justifiable homicide. Hampton was 21 years old, and born a full four years after Davis.

“I would love to honor her with flowers while she’s here,” Dean said of Davis. “She’s been able to get a lot of us young people involved. It’s such an honor to work with her. I respect what she stands for. I understand how hard it can be and for her to do this her whole life is monumental. We can get stuck in our comfort and she dedicated her life to this.”