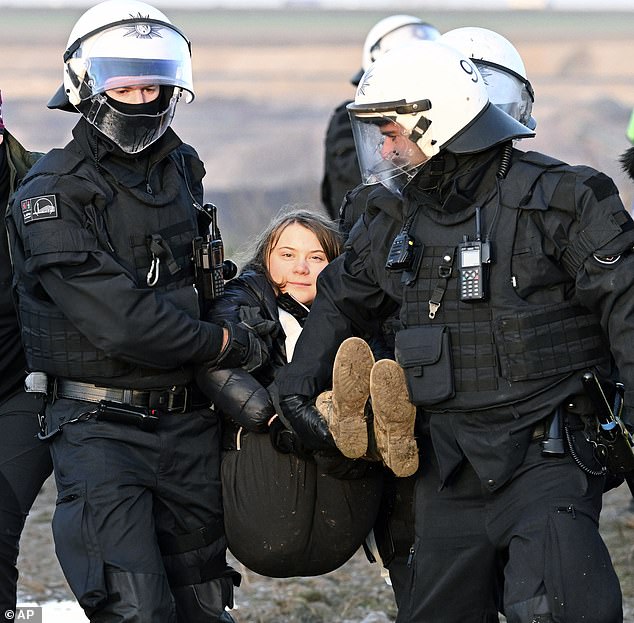 Greta Thunberg was seen smiling as she was carried away by riot police officers for the second time in three days while protesting at a coal mine in Germany today.

The 20-year-old was among dozens of climate activists who were detained by police officers during protests at a mine in the coal village of Lutzerath, in the North Rhine-Westphalia region of Germany.

The activists, who are protesting against the ongoing destruction of the village to make way for a coal mine expansion, clashed with riot police today.

Thunberg was pictured smiling as she was carried away by three police officers, all of whom were wearing riot gear. 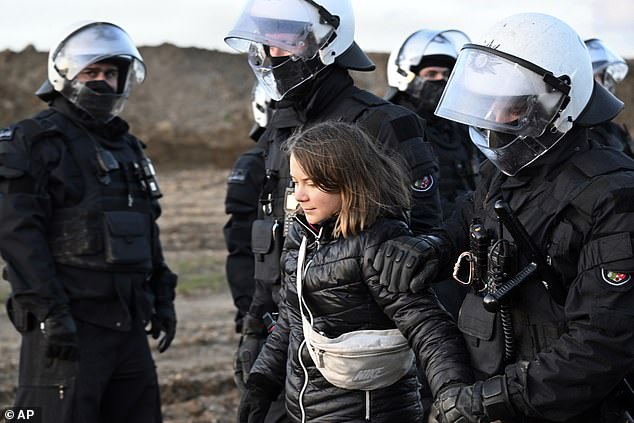 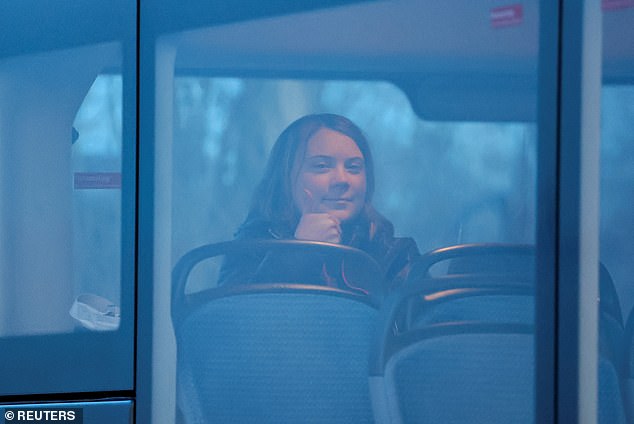 Climate activist Greta Thunberg gestures as she sits in a bus on the day of a protest against the expansion of the Garzweiler open-cast lignite mine of Germany’s utility RWE to Luetzerath, in Germany today

Thunberg, who joined the protesters on Friday, was seen sitting alone in a large police bus after having been detained on Tuesday afternoon.

It comes after Thunberg was physically removed from the same site by police on Sunday following protests.

Today, police said that Thunberg was part of a group of activists who had rushed towards the ledge of the Garzweiler open pit mine. The activists stood at the brink of the open pit, which has a sharp break-off edge, before clashing with police.

Police said it is dangerous and people were prohibited from staying there.

Thunberg was one of several protesters carried away by police from the mine’s edge in the afternoon.

One protester was able to enter the mine, RWE said, calling the move ‘very reckless,’ dpa reported. 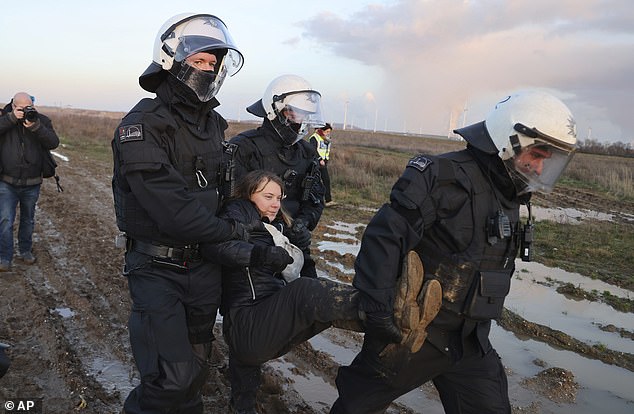 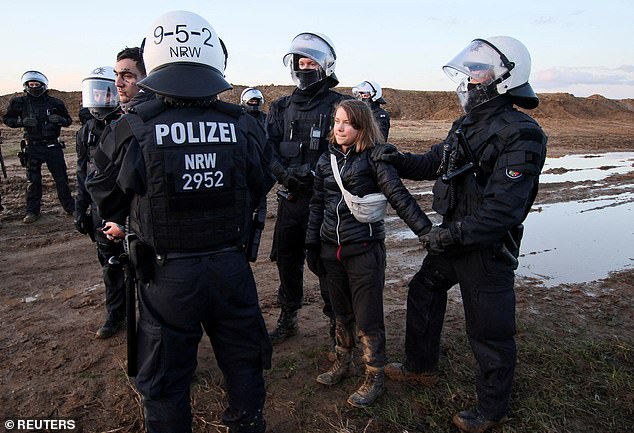 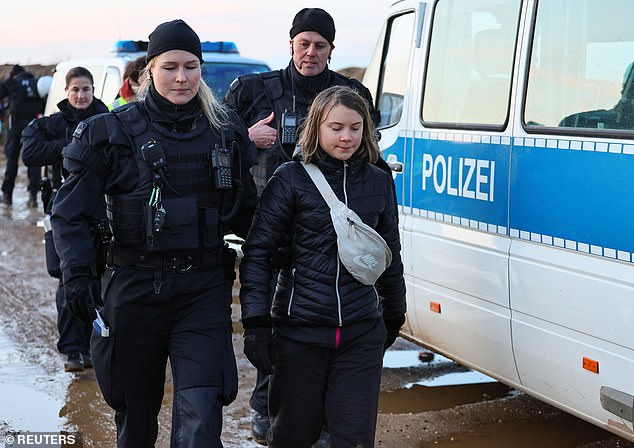 ‘Greta Thunberg was part of a group of activists who rushed towards the ledge,’ a spokesperson for Aachen police said.

‘However, she was then stopped and carried by us with this group out of the immediate danger area to establish their identity.’

It was not yet clear what would happen to Thunberg or the group she was detained with, or whether the activist who jumped into the mine was injured, the spokesperson said.

Earlier, German news channel n-tv showed Thunberg inside a group of protesters that was surrounded by several police officers.

‘We are going to use force to bring you to the identity check, so please cooperate,’ a policeman said to the group of activists, according to Reuters footage.

Activists have cited the symbolic importance of Luetzerath for years, and thousands of people demonstrated on Saturday against the razing of the village by RWE for the expansion of the Garzweiler coal mine. 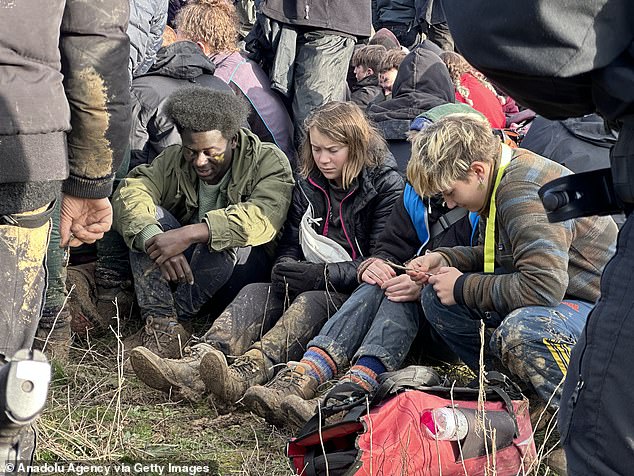 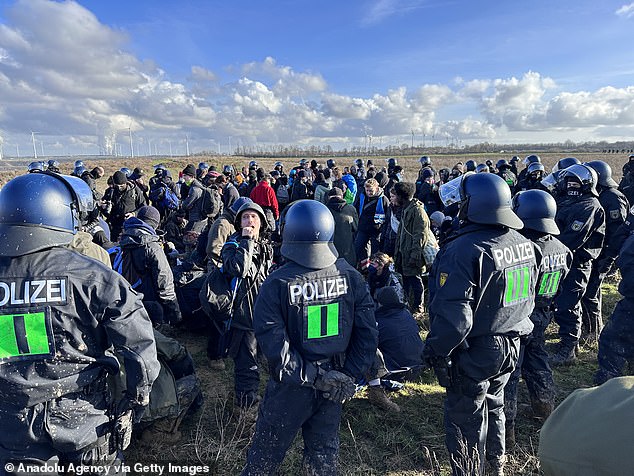 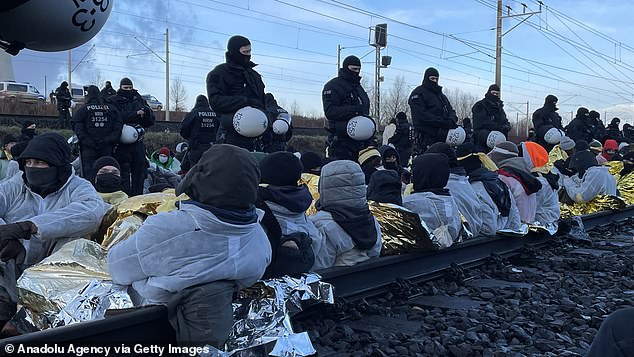 On Friday, Thunberg said Germany was ’embarrassing itself’ by expanding the mine, DW News reports.

‘I think it’s absolutely absurd that this is happening in the year 2023,’ she said.

‘The most effective people are clear, the science is clear, we need to keep the carbon in the ground.

‘When government and corporations are acting like this, are actively destroying the environment, putting countless of people at risk, the people step up.

‘This is only a part of a global climate movement and we stand together in solidarity.’

Demonstrators have accused the police of ‘pure violence’, while the authorities say 70 police officers have been hurt in recent days.

Police say it is investigating 154 potential offences, while nine eco-activists were taken to hospital, although none have been seriously hurt – a claim disputed by the climate protesters who say several have been critically injured.

The police response has descended into farcical scenes at times, with video on social media showing officers dressed in riot gear getting stuck in thick mud while protesters throw muck at them.

One video, filmed on Sunday, appears to show a man dressed as a friar taunting the stuck police officers and even pushing one over as they try to get out of the mud.

The mine, called Garzweiler, is one of Europe’s largest opencasts and is operated by energy firm RWE. It is a major source of lignite used in coal power stations.

The German government had announced plans to phase out coal by 2030 but has since changed tack after Russia’s invasion of Ukraine forced it to rethink its energy policy. 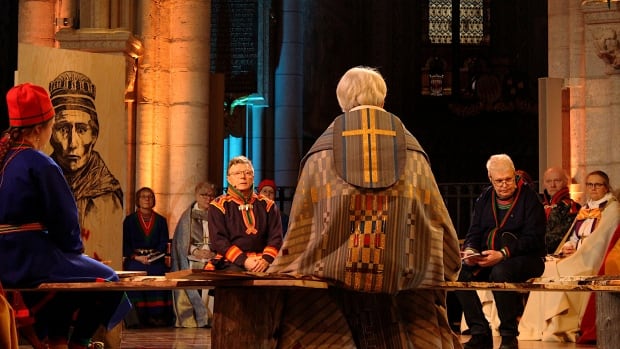