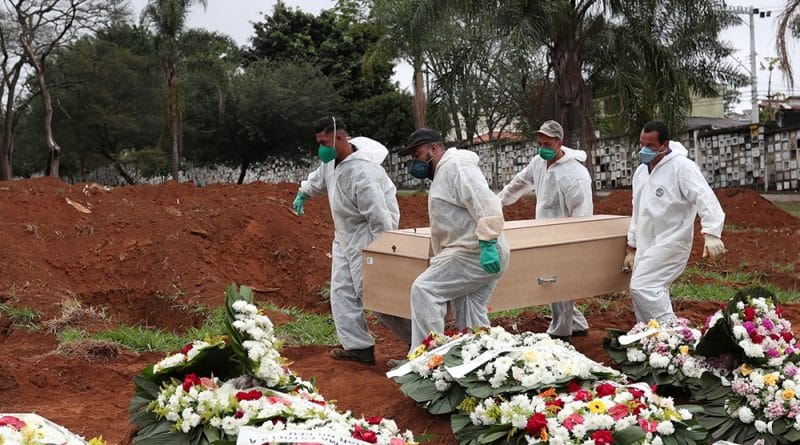 France is holding the second round of municipal elections in 5,000 towns and cities Sunday that got postponed due to the country’s coronavirus outbreak.

The voting to fill local offices in Paris and thousands of other places was suspended after the first round of the nationwide municipal elections on March 15, which produced decisive outcomes in some 30,000 other mostly small communes.

08:58 GMT – Virus-hit Iran to make masks compulsory from next week

Iran’s President Hassan Rouhani said on Sunday that mask-wearing will be mandatory in certain areas as of next week and gave virus-hit provinces the green light to reimpose restrictive measures.

The Islamic republic has refrained from enforcing full lockdowns to stop the spread of the COVID-19 disease, and the use of masks and protective equipment has been optional in most areas.

Mask-wearing would be “obligatory in covered spaces where there are gatherings”, Rouhani said during a televised meeting of the country’s anti-virus taskforce.

08:30 GMT – Half a million in lockdown as Beijing fights new virus cluster

China imposed a strict lockdown on nearly half a million people near the capital to contain a fresh coronavirus outbreak on Sunday, as authorities warned it was soon to “relax” over the new cluster of cases.

After China largely brought the virus under control, hundreds have been infected in Beijing and cases have emerged in neighbouring Hebei province.

Health officials said Sunday that Anxin county — about 150 kilometres (90 miles) from Beijing — will be “fully enclosed and controlled”, the same strict measures imposed at the height of the pandemic in the city of Wuhan earlier this year.

China National Biotec Group (CNBG) said on that early human test results for a coronavirus vaccine candidate suggested it could be safe and effective, the second vaccine candidate from the firm to show encouraging results in a clinical trial.

The experimental shot, developed by a Beijing-based unit of CNBG, has induced high-level antibodies in all the inoculated participants in a Phase 1/2 clinical trial involving 1,120 healthy people, according to preliminary data of the trial, CNBG said in a posting on the social media platform WeChat, without disclosing specific readings.

Swiss authorities say they’ve ordered 300 people into quarantine after a so-called “superspreader” outbreak of the new coronavirus at a Zurich nightclub.

Zurich officials said in a statement that a man who had been at the Flamingo Club a week ago tested positive for COVID-19 on Thursday, and that five people who were with him there were then tested and also were positive and reported to authorities on Friday.

Pakistan’s minister for science and technology says the country has started producing locally designed ventilators, as authorities reported 83 more deaths from the coronavirus.

In a tweet, Fawad Chaudhry said the first home-made ventilators will be handed over to the national disaster management agency soon. The announcement comes days after Pakistan said it was racing against time to arrange for 1,500 more ventilators as part of a contingency plan.

Global coronavirus cases exceeded 10 million on Sunday according to a Reuters tally, a milestone in the spread of the disease that has so far killed almost half a million people in seven months.

The daily number of new coronavirus cases in the Czech Republic jumped to 260, the highest since April 8, Health Ministry data showed.

That is nearly triple that of the 93 recorded on Thursday. In total, the country of 10.7 million has confirmed 11,298 cases of the COVID-19 illness, with 347 deaths as of the end of Saturday.

The acting health minister of India’s capital said that New Delhi is facing a shortage of “trained and experienced” health care workers in an interview with Associated Press news agency, providing a major challenge in a city that is the epicenter of the country’s coronavirus outbreak.

With over 77,000 cases, New Delhi has been hit harder than any other Indian city. Infections had been projected to rise to half a million by the end of July in Delhi, the territory that includes the capital.

As the rate of infections was slowing down, the number has been revised to 400,000, and Acting Health Minister Manish Sisodia said he was hopeful that it could be less.

St Patrick’s Cathedral in New York City will hold its first indoor mass in three months on Sunday, but capacity will be limited to 25 percent and health precautions including social distancing will be in place to guard against the coronavirus.

Cardinal Timothy Dolan will celebrate a Sunday mid-morning mass, according to the Archdiocese of New York.

Australia’s state of Victoria will implement mandatory coronavirus tests for returning travellers after a sharp spike in infections over the past two weeks, the state’s premier said on Sunday, Reuters news agency reported.

The country’s second-most populous state had 49 new cases on Sunday, its highest in more than two months and the 12th consecutive day of double-digit rises. The rest of Australia has seen almost no infections.

Despite the spike in Victoria, Australia’s 7,700 cases and 104 deaths remain well below that of many other nations.

The British government is considering imposing a lockdown in the city of Leicester after a surge of coronavirus cases there, the Sunday Times newspaper reported.

Health Secretary Matt Hancock is examining legislation required for the shutdown after it was disclosed that Leicester, a city of around 350,000 people in the East Midlands, has had more than 650 new COVID-19 cases in the two weeks to June 16, the newspaper was quoted as saying by Reuters news agency.

03:18 GMT – Ireland to keep its 14-day quarantine on British travellers

Ireland will maintain a 14-day quarantine for travellers from the British mainland in July even as it plans to ease travel restrictions with some countries, Reuters news agency reported on Sunday, quoting the Sunday Times newspaper.

The memo with the Irish cabinet committee said it was “highly unlikely” that Britain would be included in Ireland’s safe travel list, the report added. 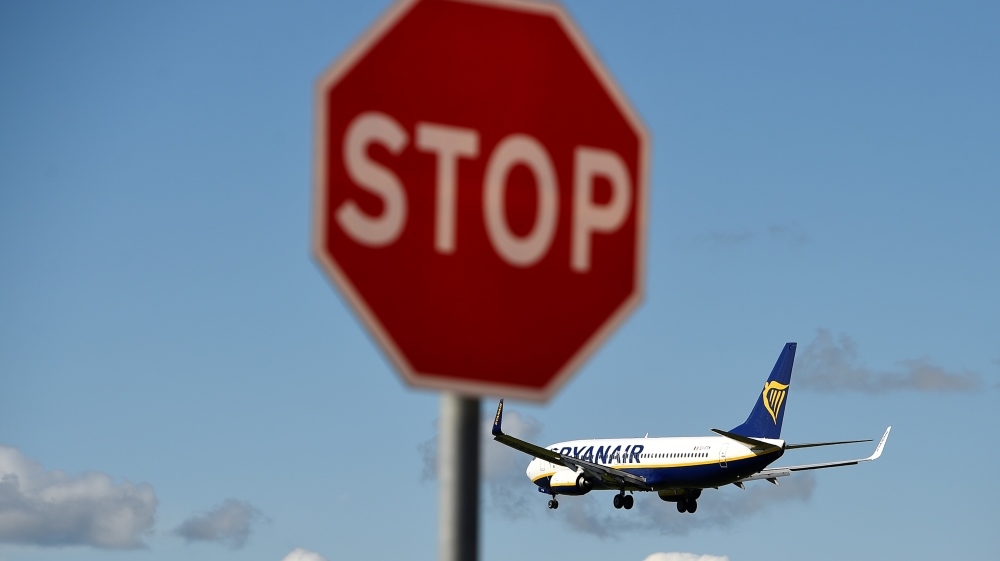 The number of confirmed coronavirus cases in Germany increased by 256 to 193,499, Reuters news agency reported on Sunday, quoting data from the Robert Koch Institute (RKI) for infectious diseases.

The reported death toll rose by three to 8,957.

02:48 GMT – US state of Hawaii to reopen campgrounds

The city of Honolulu has announced that campgrounds will reopen for the first time in three months with limited permits to ensure social distancing amid the coronavirus pandemic, AP news agency reported.

Honolulu city will issue permits for just over 100 campsites across Oahu.

The Bellows Beach campground northeast of Honolulu will remain closed through September 4 for turtle nesting. All the other campgrounds have reopened.

The new tally is higher than the 51 cases reported on Saturday, hitting over 60 for the first time since June 20.

The government reported no additional deaths, with the total death toll remaining at 282 – a fatality rate of 2.22 percent. More than 11,300 patients have recovered. 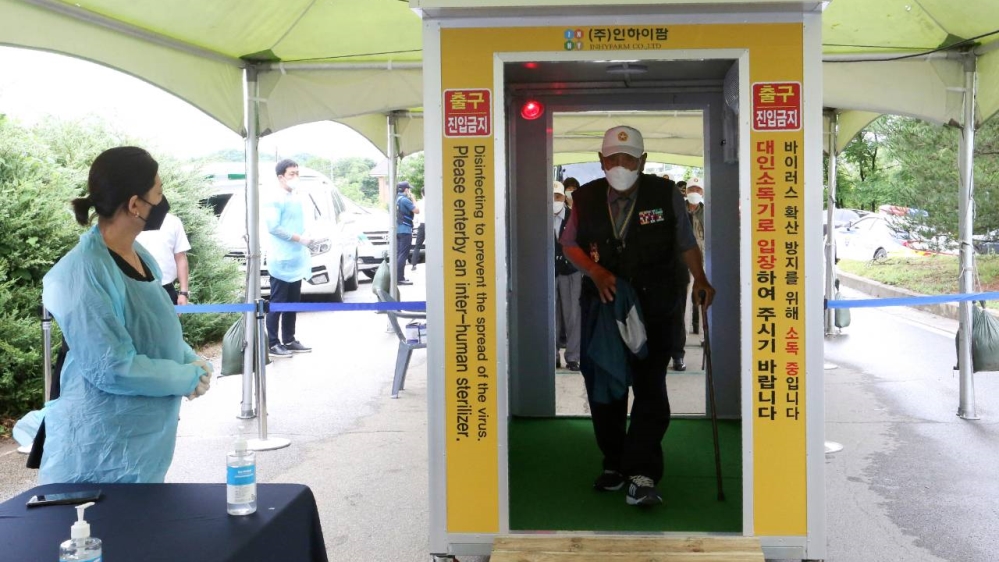 Since June 11 when Beijing reported its first case in the current outbreak, 311 people in the city of more than 20 million have contracted the virus.

Mexico’s health ministry on Saturday reported 4,410 new confirmed coronavirus infections and 602 additional fatalities, bringing the total in the country to 212,802 cases and 26,381 deaths, according to Reuters news agency.

The government has said the real number of infected people is likely significantly higher than the number of confirmed cases. 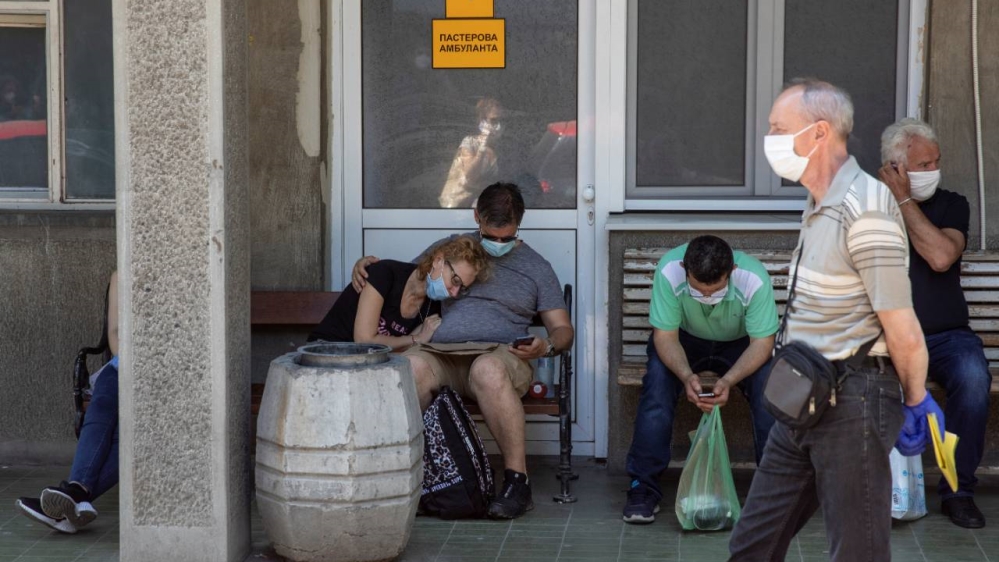 People suspected to have COVID-19 wait in front of the Hospital for Infectious and Tropical Diseases, the Clinical Center of Serbia, in Belgrade on Friday [Marko Djurica/Reuters]

The Serbian government says the defence minister, Aleksandar Vulin, has tested positive for the coronavirus.

The defence ministry said in a statement issued on Saturday that Vulin had no symptoms of the virus and was feeling fine.

Vulin, known for his highly pro-Russian stance, was part of Serbia’s delegation led by President Aleksandar Vucic that attended a Victory Day parade this week in Moscow. Vucic met face to face with Russian President Vladimir Putin, but it was not clear whether Vulin did as well.

Maja Gojkovic, the speaker of Serbia’s parliament, also tested positive, according to the state Tanjug news agency on Saturday.

The Brazilian government has announced an agreement with Oxford University and pharmaceutical company AstraZeneca to produce a promising coronavirus vaccine that is undergoing tests.

Brazilian Health Ministry authorities said in a news conference on Saturday that the country will pay $127m and receive material to produce 30.4 million doses in two batches in December and January, which would allow it to quickly start inoculation efforts if the vaccine is certified to be safe and effective.

Hello and welcome to Al Jazeera’s continuing coverage of the coronavirus pandemic. I’m Ted Regencia in Kuala Lumpur, Malaysia. For all the key developments from yesterday, June 27, click here.