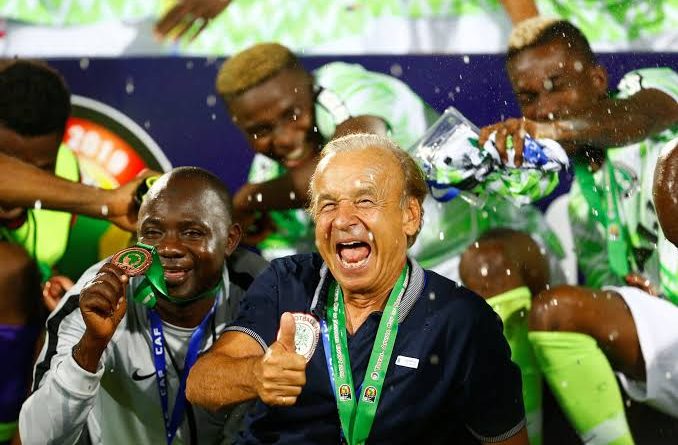 With his contract expiring in June, German tactician Gernot Rohr has reiterated that he would love to continue as head coach of the Super Eagles.

The former Bordeaux manager is convinced he can lead Nigeria’s large collection of talented youngsters to present and future glory.

Rohr was appointed the head coach of the Nigeria senior national football team in August 2016, and by the time his contract expires in the summer, he would have been the longest-serving Super Eagles coach since 1994.

During this period, the 66-year-old led Nigeria to become the first African side to qualify for the 2018 FIFA World Cup and also to a third-place finish at the 2019 Africa Cup of Nations.

All of these have been achieved while gradually introducing young, talented players into the team.

“I have been there for more than three years and it is long for Nigeria, because rarely can a coach be maintained for that long,” Rohr explained in a chat with Girondins33.

“And it was possible because the results were good, that the team has evolved and that we accomplished the mission of rejuvenation. It was planned and we managed to do it with young players including the two that you know, who play in the Girondins (Samuel Kalu and Josh Maja) and there are others in England, in Spain, etc…

“We no longer have a big star, because John Obi Mikel retired, Victor Moses also retired for family and age reasons … and even our top scorer, Odion Ighalo, announced his retirement after CAN 2019.

“We managed to find a scorer with Victor Osimhen, and other playmakers: we have Samuel Chukweze who plays at Villarreal, Samuel Kalu from Bordeaux who plays very very well with us – one of the best every time he plays with Nigeria. So we have a very, very young, promising team.”

Rohr confessed that he would gladly commit to a new contract if offered one right away. However, he revealed that the NFF has continued to drag its feet regarding contract extension plans with a meeting earlier scheduled for January now fixed for next month.

“We will soon see the (NFF) leaders, it (a meeting) is planned for the month of February, and possibly for before the matches of the month of March for the qualification for the African Cup of Nations, we could perhaps agree to continue the adventure with Nigeria.”

Rohr has been in charge of 49 Super Eagles games, leading the team to 29 victories, while 11 games have ended in a stalemate.