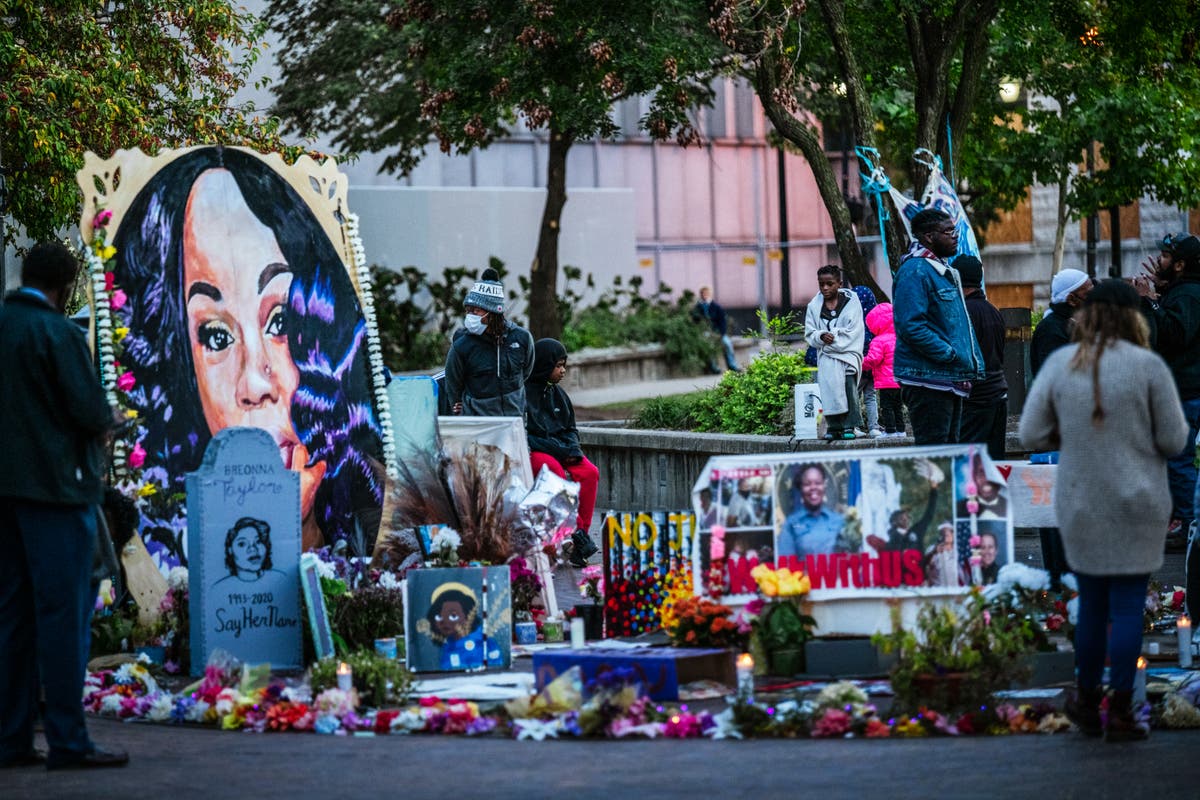 George Floyd’s death at the hands of police offices in Minneapolis last year sparked nationwide protest and led to a renewed outcry for racial justice in the United States.

The protests that engulfed the country last summer may have been sparked by Mr Floyd’s killing, but they were also rooted in a devastating string of Black deaths at the hands of the police.

Here, The Independent looks back at some of those shocking killings and what happened to the officers responsible for them.

Mr Floyd, 46, was arrested by Minneapolis police officers on 25 May 2020, after a Cup Foods employee called 911 and told the police that he had bought cigarettes with a counterfeit $20 bill.

Derek Chauvin, who is white, was capture by bystanders on video kneeling on Mr Floyd’s neck and back as he cried out for his late mother and shouted that he could not breathe.

Chauvin was immediately taken into custody and will be sentenced in early June, eight weeks after his conviction.

The state’s attorney general’s office will try and add a third-degree murder charge against all three officers in a Minnesota Court of Appeals hearing set for 20 May.

They are set to face trial on 23 August after a judge separated their trial from Chauvin’s because of Covid-19 concerns.

The three officers, who responded to the call on 25 May 2020, could face up to 40 years in prison if convicted of aiding and abetting murder.

But sentencing guidelines can also reduce that sentence to a maximum of 15 years.

Ms Taylor, 26, was shot at least eight times and killed by police officers during a bungled drugs raid at her home in Louisville, Kentucky.

Police said that her boyfriend, Kenneth Walker, shot at the three officers entering her home shortly after midnight on 13 March 2020, hitting one of the officers in the leg.

No drugs were found in the home and Mr Walker, who is also Black, was charged with attempted murder of a police officer and first degree assault, although the charges were later dropped.

In September 2020 a grand jury in the city cleared all three officers of murder, but they were all fired by the police department.

Mr Hankison was indicted by the grand jury on three counts of “wanton endangerment” for endangering the lives of three neighbors by firing bullets.

None of the officers face any charges over the actual death of Ms Taylor.

Mr Mattingly, who was shot in the leg during the incident, is writing a book giving his version of what happened in the apartment.

After a huge backlash, publisher Simon & Schuster said it would not distributeThe Fight for Truth: The Inside Story Behind the Breonna Taylor Tragedy, but it will be released by independent publisher Post Hill Press.

Mr Castile, 32, was pulled over by police officer Jeronimo Yanez on July 6 2016 in a suburban of Minneapolis, Minnesota.

The police officer said he thought Mr Castile fitted the description of a robbery suspect and approached the car to ask him for his driving license and proof of insurance.

Mr Castile told the officer he had gun with him and was ordered not to touch the weapon.

Police dashboard camera footage then shows the officer shouting again at Mr Castile to not pull out the weapon before he fired seven shots at him.

The officer told investigators that Mr Castile was moving his hand and that he feared for his life and the lives of the car’s passengers.

Mr Yanez, an officer with the St Anthony Police Department in Minnesota was charged with manslaughter and endangering the lives of the two passengers.

At trial in 2017 he was acquitted on all charges but did not return to the police department, which reached a “voluntary separation agreement” with him.

Mr Gray, 25, was arrested by police officers in Baltimore on 12 April 2015 for having a knife and was placed in a police van, which was caught on camera.

By the time that van arrived at the police station Mr Gray was not breathing and died a week later from spinal injuries a medical examiner said were suffered during his transportation.

Police officials said that although Mr Gray was put in leg restraints during the trip he was not secured with a seatbelt or given medical help, despite asking for it.

The death was ruled a homicide by the medical examiner and the Baltimore State Attorney, Marilyn Mosby, filed criminal charges against the officers.

The jury at the trial of Mr Porter was deadlocked and the judge declared a mistrial, and prosecutors eventually dropped all charges against Mr Porter, Mr Miller and Ms White.

Mr Rice was eventually found not guilty of involuntary manslaughter, reckless endangerment, and misconduct in office.

Mr Nero was acquitted on misdemeanor charges of second-degree assault, reckless endangerment and misconduct in office.

All six officers were allowed to return to duty.

Tamir Rice, 12, was confronted by police in Cleveland, Ohio, in November 2014 after someone called 911 and reported a person playing with a gun near a recreation centre.

The caller reported that the gun was “probably fake” and the person with it was most likely a child.

When police arrived on the scene, officer Timothy Loehmann got out of the car and opened fire, killing the youngster.

It turned out that Tamir had been playing with a pellet gun and authorities said that the description of a child playing with a fake gun had not been passed on to the officers who responded.

A grand jury did not indict either officer in the case but Mr Loehmann was later fired by the department for lying in his application to work as a police officer.

Walter Scott, 50, was pulled over for a routine traffic stop by white police officer Michael Slager in South Carolina on 4 April 2015.

When Mr Scott ran from the scene he was chased by the officer who shot him five times in an incident caught on a cellphone by  a bystander.

After the video became public the officer was charged with murder and later a federal civil rights violation.

The jury in his December 2016 trial was deadlocked and prosecutors announced they would retry him.

But before they did Slager pleaded guilty to the federal civil rights violation and was sentenced to 20 years in prison.

Mr Brown, 18, was shot and killed by officer Darren Wilson after being suspected of stealing cigars from a convenience store.

Mr Brown was unarmed and his friend, Dorian Johnson, told reporters that he had “put his hands in the air” when he was killed.

Two investigations concluded that Mr Brown did not have his hands in the air when he was killed, and in November a grand jury declined to indict Mr Wilson.

Then in March 2015 Barack Obama’s Justice Department released its own report that stated, “there is no credible evidence that Wilson willfully shot Brown as he was attempting to surrender or was otherwise not posing a threat.”

But on the same day the Justice Department also released its own investigation into the Ferguson Police Department, which concluded that there was systemic exploitation and racial profiling of black residents by its officers.

Laquan McDonald, 17, was killed by Chicago police officers after they responded to reports of someone trying to break into cars on 20 October 2014.

Police followed the teenager and witnessed him use a knife to slash a patrol car’s tyre.

Officer Jason Van Dyke, who is white, arrived at the scene and shot at Mr McDonald, hitting him 16 times as he was moving away from him.

Dashboard footage of the killing was only released in November 2015 after the city had agreed a $5 million settlement with Mr McDonald’s family.

When the video became public Officer Van Dyke was arrested and charged with murder.

Van Dyke was convicted of second-degree murder and sentenced to more than six years in prison.

His arrest came two weeks after they gave him an initial warning for doing the same thing on a street corner.

The fatal encounter was videotaped by a bystander, and showed white officer Daniel Pantaleo wrap his arm around Mr Garner’s neck in a chokehold.

Mr Garner could be heard shouting “I can’t breathe” 11 times before he fell unconscious and died.

Despite huge protests in the city, a local and federal investigation resulted in no charges beg brought against Mr Pantaleo and the other officers involved.

Mr Pantaleo was eventually sacked in August 2019, five years after the death of Mr Garner, when a New York Police Department disciplinary judge recommended the firing.

His lawyers had argued that the officer had “acted the way he was taught to act.”

“This has been a long battle, five years too long,” said Emerald Garner, one of Eric Garner’s daughters of the firing.

“And finally somebody has said that there’s some information that this cop did something wrong.”