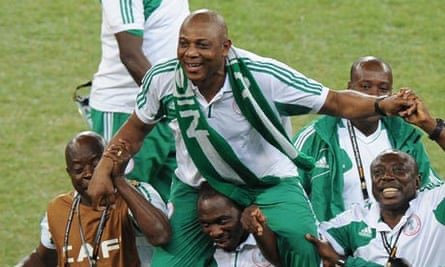 Fans, friends, former players, and bosses have posted emotional tributes to the ‘Big Boss’ who left an indelible mark on Nigerian and African football

Stephen Keshi passed away on June 7, 2016, after suffering a heart attack, six months after losing his wife, Kate, to cancer.

Keshi remains the only Nigerian – and the only man after Egypt’s Mahmoud El-Gohary – to win the Africa Cup of Nations as a player and coach.

Keshi made his international bow for Nigeria in 1981 at the age of 20, helping the team to silver medal finishes at the 1984, 1988, and 1990 African Cup of Nations Championships.

He then skippered a Clemens Westerhof-led Eagles to a successful AFCON 1994 outing as well as their maiden Fifa World Cup appearance in the United States of America in the same year.

The former Anderlecht centre-back after that drew the curtain on his international career, having amassed 64 caps and nine goals.

After hanging his football boots, he went straight into football management, helping Togo qualify for the 2006 World Cup.

The ex-Strasbourg ace also led Mali to the 2010 Afcon in Angola, before he was hired to replace Super Eagles caretaker coach Augustine Eguavoen in 2011.

Continental success followed in 2013 as Keshi led the Eagles to her third AFCON glory, 19 long years after her last triumph in Tunisia.

He managed the side to the Fifa Confederation Cup 2013 and the 2014 Fifa World Cup and became the first African coach to reach the knockout stage, where the Super Eagles fell to France in the Round of 16.

Sunday marks the fourth anniversary of Keshi’s passing, and the Confederation of African Football took to social media to share a moving tribute to the icon.

“Today we remember Captain Fantastic, Stephen Keshi, who left our world on this sad day four years ago Candle.

“In 2013 Keshi became the second person to win the #TotalAFCON title as player (1994) and coach, when he led
@NGSuperEagles to their third trophy in South Africa,” CAF wrote on Twitter.

Today we remember Captain Fantastic, Stephen Keshi, who left our world on this sad day 4 years ago 🕯️

In 2013 Keshi became the second person to win the #TotalAFCON title as player (1994) and coach, when he led @NGSuperEagles to their third trophy in South Africa. pic.twitter.com/XeSBqoJXjz

Keshi captained Nigeria’s golden generation of 1994 that included the likes of Rashidi Yekini, Daniel Amokachi, Jay-Jay Okocha and others, as they reached the FIFA World Cup for the first time in their history in USA, and won the #TotalAFCON title in Tunisia same year. pic.twitter.com/jLTPenOcko

The Nigeria Football Federation, NFF, equally posted moving words to remember a hero who brought so much honour to his fatherland.

“Today we remember former
@NGSuperEagles captain and coach, Stephen Okechukwu Keshi. Big Boss, we miss you, continue to rest in the Lord’s bosom. #WeRememberKeshi,” wrote the NFF on Twitter.

Former African Footballer of the Year and legendary Chelsea striker, Didier Drogba, also this to say:

“Today, we remember you Captain Keshi.”

Joseph Yobo, who captained Keshi’s team to win the 2013 Afcon, has also penned an emotional tribute to his former boss.

“Dear coach, it’s been four years today since you left us to rest with the Lord. You are deeply missed, but your legacy lives on! Rest on the Big Boss,” Yobo wrote on Instagram.

Nigerians have flooded the social media platforms to offer touching tributes to Keshi.

How Keshi Predicted His Death
When he lost Kate, his soulmate and wife in 2015, Stephen Keshi said the world had lost its meaning and sees no reason to live. He was devastated and died 6 months later in 2016 from a heart attack.
Skippo would’ve been 60 today. RIP The Big Boss. pic.twitter.com/OMS5big7wW

It’s been 4 years since Stephen Keshi passed on. A man that made many Nigerians in my age bracket experience the joy of seeing their nation lift a major international trophy for the first time.

The joy that was experienced that day will never be forgotten, so is the man. pic.twitter.com/IEWnfIsQFr

You lived and left as a champion… As a player and as coach.

It’s been 4 years without you.

Exactly today four years ago Stephen Okechukwu Keshi left us, but then his memories remain in our hearts, a man who broke record by winning the #AFCON as a player and a coach. You indeed a Hero for our darling country Nigeria.

Osimhen, Onuachu Or Sanusi: Who Is Nigeria’s Top Player Of 2020? 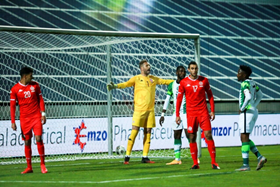