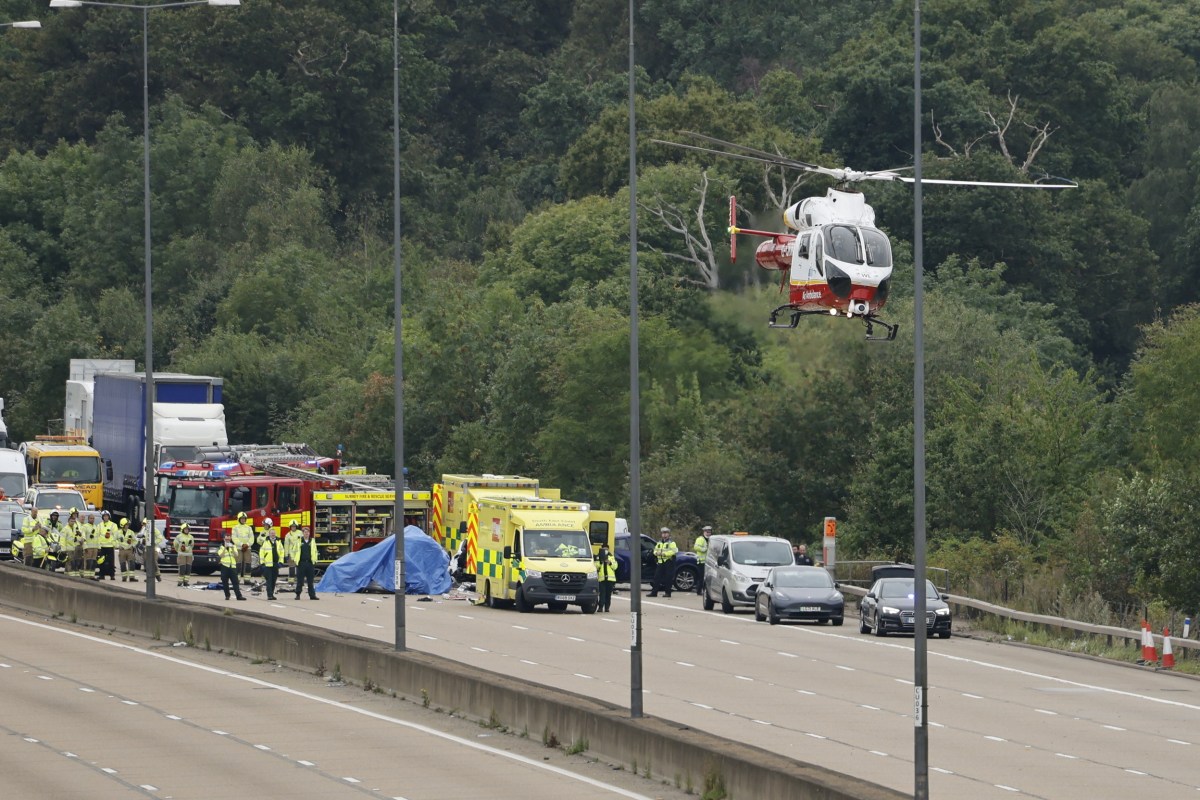 A FOUR-VEHICLE smash on the M25 has been blamed on climate change protesters who blocked the carriageway in a pathetic stunt this morning.

A 50-year-old woman was airlifted to hospital in a serious condition after the crash at junction 9 for Leatherhead, Surrey.

Horror unfolded as campaigners from Insulate Britain – which is linked to Extinction Rebellion – staged a sit-in on the UK’s busiest motorway for the second time this week.

At least 32 arrests have been made after demonstrations at two major junctions.

And while cops say it’s “too early” to know if the crash was caused by the protest, one witness said it was “blatantly obvious”.

Steve Glenn, who was commuting to work clockwise on the M25, told The Telegraph: “The cars ploughed into the back of each other.

“It was so blatantly obvious what had happened. The standstill traffic was caused by the protest. One car was squashed into half its size.”

Photos from the scene show a wrecked car alongside two white vans and another black vehicle.

Police later set up a blue tent on the highway as their investigations continued throughout the day.

At the height of the incident, there were seven miles of queues along the route.

Government officials are among those to slam the protesters for blocking the road.

Business Secretary Kwasi Kwarteng said: “These actions are not only highly disruptive to those going to work and transporting vital goods, but are putting lives at risk on a busy motorway.

“Not to mention the resulting traffic delays will only add to vehicle emissions.”

Some 89 activists from Insulate Britain brought traffic to a standstill.

A second group shut down the main carriageway from Junction 8 at Reigate to Junction 9 at Leatherhead, both in Surrey.

Some even glued their hands to the road in the Dartford Crossing area at Junction 1A and 1B.

The climate change group, dressed in hi-vis and brandishing banners reading ‘please turn off your engine’, plonked themselves in the middle of the road in both locations.

Do you recognise any of the protesters or did you witness the crash? Email [email protected] or call call 0207 782 4368

Some stuck motorists yelled “we’ll lose our jobs” and honked their horns but the demonstrators refused to budge.

Other shouted: “Go and find something better to do with your lives.”

A lone officer at one of the scenes reportedly told the protesters: “I’m going to have to ask you to move.”

He then strolled back to his car, witnesses say.

A spokesperson added they were taking action again today to get Britain’s homes insulated and create thousands of jobs and save lives.

Among those held up shortly after 8am was an NHS worker trying to get home after a night shift.

And pharmacist Graham Weidle, who is not able to get to work, said: “I need to open a pharmacy in Soho.

“I think [Insulate Britain] are just going the wrong way about it. They are doing this for effect but not for sympathy.

“Every car here has its engine running and that’s tens of thousands of cars.

“They are just working against themselves. I don’t believe they have any support.”

In response to the criticism, a spokesperson for Insulate Britain said: “You’re angry. So are we. You’re afraid for your job. So are we. You feel powerless. So did we.

“But sitting in the road makes Boris Johnson sit up and take notice. So we’re staying, until 10 Downing Street get on with the job.”

They added: “The people in cars are angry, they are outraged, they are disgusted. Rightly.

“What a thing to do. What stupidity. What idiots. So why are we doing it?

“Because we will not stand by and see our families suffer, their livelihoods destroyed and our country betrayed. Never. Never.”

This action is not only incredibly dangerous in potentially putting lives at risk but it also backfires in environmental terms by causing more delays and more vehicle emissions.

Swarms of cops finally made it to the scene, with Surrey Police arresting a total of 25 people in connection with the incident between Junction 8 and 10.

Officers said they were also attending the scene of a serious four-vehicle crash – but it is unclear if this is related to the protests.

The madness caused up to five hours of delays for tens of thousands of drivers on the M25 – and things turned sour when furious motorists tried to drag resistant protesters away to clear the roads.

AA president Edmund King said: “This action is not only incredibly dangerous in potentially putting lives at risk but it also backfires in environmental terms by causing more delays and more vehicle emissions.

“These are some of the busiest sections of the M25 where tens of thousands of drivers will have been affected and has a negative knock-on effect on economic activity.”

We pay for your stories!

Do you have a story for The Sun news desk?

Are the All Blacks Chokers?