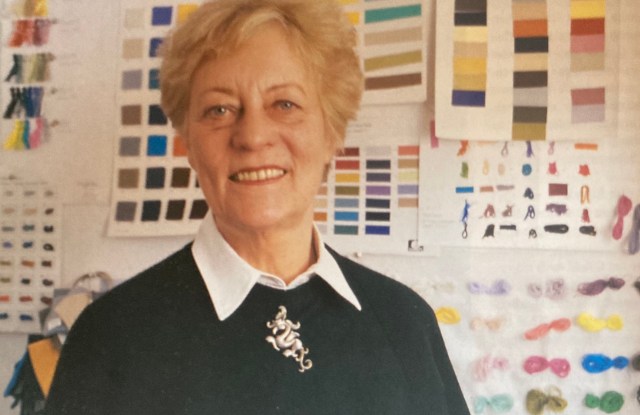 Forward-thinking swimwear designer Monika Tilley, a founding member of the Council of Fashion Designers of America, died Dec. 23 at age 86.

A celebration of her life will be held at a later date, according to her daughter, Mona Tilley.

Her decades of experience in the fashion industry included ushering in generations of designers and creatives. As an emeritus member of the CFDA’s executive board, she was instrumental in starting the council’s scholarships awards in 1996. Tilley traveled to scores of universities and colleges to speak with deans about their needs and how the CFDA could be involved. More than 24 years later, the program continues to nurture new talent.

Born in Vienna, Tilley spent her adult life working in the apparel industry in New York. After completing her primary education, she earned a master’s degree from the Vienna Academy of Applied Arts. She came to the U.S. on a UNICEF grant in the late Fifties. Her decision to stay Stateside wasn’t exactly welcome news to her parents, whom she once told WWD “kept calling the consulate saying, ‘Extradite her.’”

Unwavering, Tilley persevered even though her first job as an illustrator at Harper’s Bazaar posed some financial challenges. “I couldn’t cash my paychecks because I had no labor permit,” she recalled in 2007.

Her multifaceted career in fashion was highlighted by being a designer for White Stag, Cole of California and for many years at her own Monika Tilley Ltd. Full of vigor, quick to smile and with a naturally rosy complexion that was created by the great outdoors rather than any man-made beauty products, Tilley embraced the athletic and active life before it became a category unto itself.

She created attire for U.S. athletes for three Olympic Games. When one of her clients, Levi Strauss & Co., became a sponsor of the 1980 and 1984 Olympics, she created parade and honor uniforms for the American teams. This milestone was a career highlight for Tilley, who was born on the Fourth of July.

An avid skier and sportswoman, the no-nonsense designer understood the need for high-performance functionality and innovative fabrics. In addition to designing skiwear for White Stag and swimwear for Cole of California, she designed swimwear under her own label for many editions of the Sports Illustrated Swimsuit issue, including designs for Christie Brinkley.

A two-time Coty award winner for her leadership in swimwear design, Tilley was always enterprising in her efforts, whether that was for designing Vassarette lingerie or dreaming up new colors for Monsanto.

A hard worker, Tilley had the foresight to recognize the importance of nurturing future creatives. Her agility in injecting color into her designs helped to differentiate her work from others.

Her son Martin said Monday, “What she really liked a lot was the use of fashion as a form of expression: how you feel about yourself, how you present yourself.”

Unmistakable for her lanky stature and gravelly laugh, Tilley’s enthusiasm about far-ranging subjects was often punctuated with “wonderful.” Keen as she was to learn about the latest news in the industry, she also greeted friends by peppering them with questions about their nonworking lives. Tilley was fond of saying, “For helping hand, look at end of right wrist.” Her daughter mentioned another favorite expression Monday, “‘A working guest is a happy guest,’” adding with a laugh, “My friends stopped coming by.”

While her decorum was undeniable, Tilley made her opinions known — directly with friends and relatives, and more delicately with fellow designers. “She would say, ‘This is another possibility,’” her son said.

One of Tilley’s friends, Patricia Underwood, remembered how Tilley had invited her to be part of the CFDA’s admissions committee. “As a very sweet present, she gave me a book of Nancy Mitford essays. The name of the book was ‘A Talent to Annoy.’ I sort of wondered whether it was a reflection of my personality [laughing] with a very sweet dedication.”

Pioneering in her use of fleece, Lycra and other man-made fibers in the athletic market, she was eager to put techno fabrics to use. “She was an unsung hero in that world,” Underwood said. “…she was very involved with the CFDA, when it really was all-hands on deck and volunteer-oriented when everybody gave their time and efforts. Monika’s career was very fabric oriented. There was a lot of depth to her.”

With Underwood, Maryann Restivo and Cathy Hardwick, Tilley orchestrated an annual birthday lunch for Eleanor Lambert at Swifty’s, where the late publicist liked to be planted in the front window. The tradition continued after her death with an amorphous group that included Jeffrey Banks, Eric Wilson, Isabel Toledo and others. “It was great fun,”  Underwood said.

Her consulting skills were not just used in the realms of apparel and textiles. She had a hand in the Metropolitan Museum of Art’s Hapsburg fashion exhibition in the early Eighties. She served on the board of the U.S. Color Association of the U.S. Designer Jeffrey Banks described Tilley, a former CFDA board member, as “a real stalwart of the CFDA. And a terrific designer.”

Unfailingly prompt for appointments, Tilley was very efficient. “She never wasted time. She never wasted a design sketch. She knew what she wanted from the get-go and her work exemplified that. And she was a very loyal friend,” noting how Tilley encouraged him to join the U.S. Color Association to create forecasts, despite his already overly busy work schedule.

With a home in Warren, Vt., Tilley hosted an annual Fourth of July breakfast for hundreds on her front porch and lawn. Her daughter recalled Monday, “The parade starts in front of our house so that’s why we get hundreds of people milling around. At one point, it got so large that we finally had to put a portalet on our lawn, which people did not appreciate [with laughter].”

In 2007, Tilley was honored in New York by the Austrian Council General Brigitte Blaha with the Decoration of Honor in Silver for services for the Republic of Austria. The honor was one that her father had also received during his lifetime, but Tilley noted at her own ceremony, “I feel parts of my family are much more deserving than I am.”

A friend of Tilley’s for 50-plus years, Stan Herman recalled that she, along with Underwood and the late Maryann Restivo, were the three women who sat him down and told him that he should become the next president of the CFDA. Their egging him on made that happen, Herman said. Heading up the CFDA’s membership for years, Tilley took that role extremely seriously. “An artist at heart,” she wanted people to elevate. “Her idea was that if you were a designer, you had to elevate. You can’t be commercial. So the people who got into the CFDA [at that time] were not commercial. They were more of the art world designers. Many of them became first-name designers,” Herman said. “I think she would want to be remembered as a very fine articulate designer who tried to  elevate the fashion business in her way. She was commercial in her clothing but she was a very serious about her commerciality.”

An intellectual, she had many interests outside of fashion, including music and language. With a broad knowledge base, Tilley was adept in the art of conversation and healthy intellectual debate. When former presidential candidate Bernie Sanders turned up at her Fourth of July gathering, she spread the word with the media.

Designer Mary McFadden described Tilley “as a very kind woman” whom she had had a lot of fun with. Having met Tilley in the Sixties through the CFDA, McFadden said Tilley would want to be remembered as “loved by everyone.”

Tilley had alluded to that years ago in accepting one of her awards, telling the small group of attendees, “Life is made up of family, friends and love.”

In addition to her daughter and son, Tilley is survived by a brother, Thomas Nowotny.