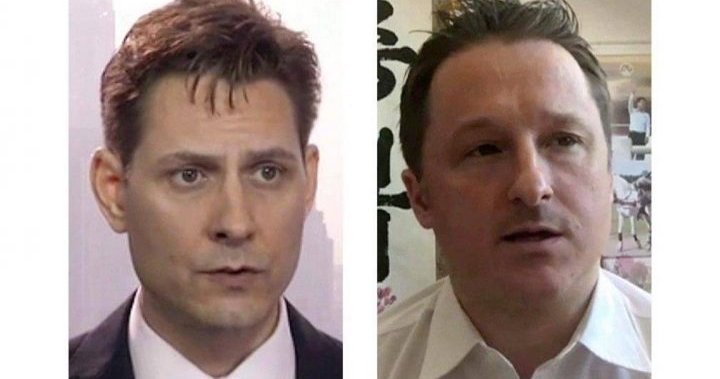 As Michael Kovrig and Michael Spavor face their third Christmas behind bars in China, a Canadian couple who lived through similar holidays hope China will provide the same “beautiful act of kindness” they received.

Julia and Kevin Garratt were picked up by Chinese state security forces in August 2014. Kevin spent 775 days in prison — a grim milestone Spavor and Kovrig will soon meet.

Both of them were first in a ‘black jail’ (extra-legal detention centre) for six months. After that, Kevin was transferred to prison and Julia spent a year and a half on what she describes as house arrest in China.

Time behind bars meant interrogation, missed meals, and lights on 24 hours a day. Once in the public prison, Kevin shared a cell with 14 people, forced to sleep head to head while other prisoners paced the aisles on watch.

0:30
Trudeau says he hopes for good news for two Michaels before the New Year


Trudeau says he hopes for good news for two Michaels before the New Year – Dec 16, 2020

“What’s really very, very different is that time stops and it goes by in seconds,” said Julia.

Christmas, by contrast, was a bright moment. The Garratts say the Chinese made an effort to show kindness. The first Christmas involved a makeshift dinner, which their son attended. The second Christmas, Julia, who was out of detention by then, was brought in.

It wasn’t your normal Christmas dinner, and not just because of a lack of turkey: there were two interrogators plus a couple of guards present, conservation was restricted and the couple couldn’t get too close with an empty chair separating them.

On the second Christmas Day, Kevin was taken to an interrogation room where he met the judge who would be handling his case. In the Chinese legal system, the judge eventually replaces prosecutors, which the Garratts took as a sign of progress.

“But then it just went back to the normal, or worse than normal,” said Kevin.

“So I really feel for the two Michaels. They’ll be thinking, of course, of family, of Christmases past and wanting the same thing again, but they won’t be able to have it. So I’m praying and hoping that the government will allow them to have a call or something with their family, just to give them hope.”

Kevin says if connection with family happens, it would “be a really good sign,” while if it doesn’t, China is “really playing hardball with the Canadian government.”

The Garratts find striking similarities between their cases. Kovrig and Spavor were arrested in China in December 2018, shortly after Canada detained Meng Whanzhou, wanted by the United States. Her extradition case is ongoing in Vancouver.

They were so close to the border, they could see North Korea from the window of their apartment.

Swarmed and separated by state security forces as they left a restaurant in 2014, the Garretts were taken just weeks after Canada detained a Chinese citizen in Vancouver.

Su Bin was wanted by the U.S. on accusations of conspiring to hack military data from defence contractors.

In March 2016, Su pleaded guilty, agreed to be extradited and was sentenced to 46 months in a U.S. federal prison.

It would be another six months before first Julia, and then Kevin, made it back safely to Canada.

“I think they’re really much the same,” Kevin Garratt said of their case compared to Kovrig and Spavor’s.

Read more:
Canadian couple detained in China know what ex-diplomat Michael Kovrig might be going through

The Garratts believe the stakes are higher in the ongoing case, as Huawei executive Meng is a high-profile VIP.

Julia believes Kovrig and Spavor are pawns, and hopes they can hold out for a peaceful resolution.

The Garratts have been writing letters to the Canadian government advocating for the two men, and sending Christmas cards to Chinese embassies — part of a global movement to flood embassies with cards for Kovrig and Spavor.

“I think if the Chinese government sees thousands — or millions — of cards arriving at their embassy, I think it will make a statement to them that people are concerned and this just can’t go on,” said Kevin.

While he knows Kovrig and Spavor aren’t likely to see those Christmas cards, he believes they’ll hear about them during consular visits.

“If they hear that thousands of people are sending cards, that will give them hope, that will change the atmosphere for them,” said Kevin.

The detainees are supposed to get one visit a month. For much of 2020, consular visits were cancelled due to the COVID-19 pandemic.

Canada’s ambassador to China, Dominic Barton, was allowed to return for virtual, on-site visits in October, November and December.

Global Affairs Canada would not say whether there is any guarantee from China that the visits are here to stay.

“Though we are encouraged by the recent on-site virtual consular access to Michael Kovrig and Michael Spavor, these visits are a requirement under the Vienna Convention on Consular Relations and the Canada-China Bilateral Consular Agreement. We continue to work tirelessly towards securing meaningful and ongoing access to Mr. Kovrig and Mr. Spavor,” wrote GAC spokesperson Christelle Chartrand.

She would not disclose whether Ambassador Barton informed the two men about the Christmas card-writing campaign at their last visit, citing the Privacy Act.

“I got messages from Julia, from my family, from our kids…those were huge to keep me going and keep me encouraged,” he said.

Books and photos also came in through the visits, though everything was screened carefully. There were restrictions on what could be discussed: namely, talk of the case was forbidden.

Julia remembers life behind bars as full of “waves of ongoing disappointment,” with consular visits providing “some hope.”

They couldn’t bring paper or pens, so they memorized messages for loved ones and passed them on to the official. She says getting out messages to family were as important as any messages they could receive.

“Right after a consular visit, it was the countdown to the next one — 29 days and 23 hours,” said Kevin.

In September 2016, after a guilty conviction, Kevin was put on a plane home with little notice. Julia had been allowed to return to Canada two weeks prior, and “basically had to be in hiding” in Edmonton.

She remembers the Canadian government said it looked like there was progress, but couldn’t tell her anything concrete. She asked officials if she should get herself to Vancouver, and in the absence of a firm no in response, she got moving.

“I got on a plane and I arranged it and I got back to Vancouver at midnight. And Prime Minister Trudeau phoned me just after midnight and said, ‘He’s on the plane.’”

Kevin didn’t begin to relax nor believe he was really coming home until he was out of Chinese airspace.

All four Garratt children managed to make it to YVR in time, and the family was reunited in a room at the airport.

“I’m believing that the Michaels’ story will end like that as soon as possible…their family waiting for them inside the door. And that door will open and they will just walk through and there will be this amazing reunion hug,” Julia said.

“It changed our lives and we’ll never forget that joyful moment.”

The ordeal in detention still has lasting effects for the Garratts.

In one tangible way, they believe they’re still under some form of surveillance by China. That feeling presents itself whenever they do a media interview, like this one. It’s not as intense as when they first left China, Julia says, but it’s there.

“All of a sudden everybody notices problems with our phones, problems with our computers and things like that. So there still is some kind of an ongoing frustration for us with that feeling that we’re always being watched.”

They say friends and family will notice tech problems and text them, asking if they gave an interview.

But don’t call the Garratts victims — that’s not how they feel, nor how they want to live.

They’ve written a book about their experiences, and they’re continuing their aid work, now through their non-profit Nation to Nation, focused on delivering help — including for COVID-19 — in Myanmar.

“Our calling for 30 years was to help in China, and that’s what we did. And, you know, we don’t feel God’s taken away that calling,” Kevin said.