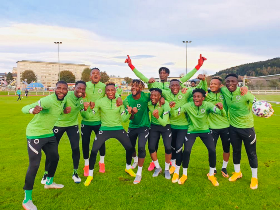 The Super Eagles were once again beaten by a more tactical Algerian side in the first of their two international friendly games in Austria.

Allnigeriasoccer.com‘s Izuchukwu Okosi highlights the five takeaways from the friendly.1.  Poor First Half, Improved Eagles In The Second

The Nigerian players struggled to break down a disciplined Algerian defence and rarely put their opponents under any pressure.

However their collective play improved in the second half and they could even gain their first corner of the game.

Alex Iwobi before he was substituted off and Moses Simon did interchange some passes that sought to open  up the Algerians but they were not able to achieve it ultimately.

New boy Zaidu Sanusi proved he can be a good asset as a defender as he did his job without fear of the Algerian superstars.

But what was more eye-catching of his performance was the willingness to bomb forward to support the attack and still  recover in double quick time.

Sanusi will give Jamilu Collins a battle for the left back position.

3. Covering Up For Teammates

At a time in the second half, Sanusi lost the ball to Riyad Mahrez but thankfully Leon Balogun who grew into the game mopped up for his new teammate.

Such willingness to cover up for each other’s lapses was evident not just on this case but severally in the game.

Everton’s Alex Iwobi was the only creative spark in the Super Eagles midfield that lacked the vibes of Wilfred Ndidi and Oghenekaro Etebo.

The Eagles midfield was knitted together by Iwobi who drove forward and found attacking teammates through the passing lanes.

Paul Onuachu did not have a shot on target despite using his back to goal to considerable effects.

The Genk striker also helped defend set pieces but as a striker must work on his ruthless streak before the Eagles recommence their competitive games.

It seemed he only deputised for Victor Osimhen rather than showing why he must oust the Napoli striker as the Eagles’ number 9.