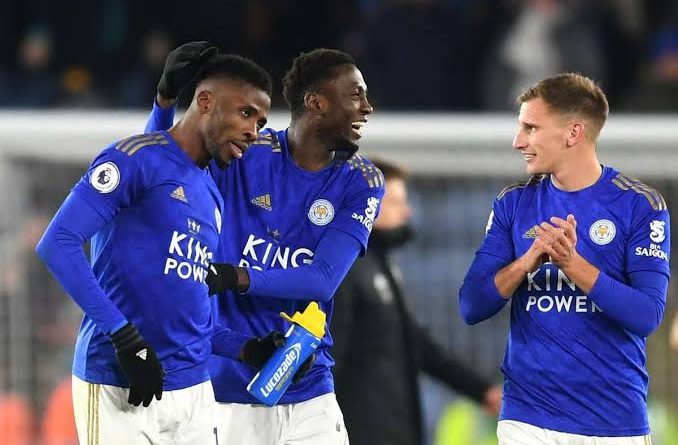 Although the Super Eagles star’s market value has increased compared to when he arrived in England, fans are adamant that he should be high up on the list of the world’s most valuable defensive midfielders.

Ndidi is widely regarded as one of Leicester City’s best players this season, but according to a Transfermarkt report, the 23-year-old is currently the 10th most valuable defensive midfielder in the world. The former Genk star joined the Foxes for 17.60m euros in 2017.

The top three most valuable defensive midfielders in the world are Manchester City’s Rodri, Bayern Munich’s Kimmich and Liverpool’s Fabinho. In Africa, only Thomas Partey of Ghana and Atletico Madrid ranks higher than Ndidi.

Most Valuable Nigerian player. Now 10th most expensive Defensive Midfielder in the world.@Ndidi25 is on an upward trend 📈 pic.twitter.com/6WfaIDtzcV

However, football fans across the world have voiced out their dissatisfaction at the ratings. A large section of fans is not convinced that the trio of West Ham’s Declan Rice, Wolverhampton Wanderers Ruben Neves, and Chelsea’s Jorginho should be ranked above a player with the most interceptions in the Premier League this season.

If Ndidi’s name was Ndidinho or had an English passport his market value would be €80m or more! https://t.co/XBlm19U2Kx

Rice, Neves and Thomas are not valuable than Ndidi.

Call be stupid if you want but Ndidi is number 1 on my list.. pic.twitter.com/jnDot9J9o6

I don’t care who make this list.
To me
1. Fabinho
2. Jorginho
3. Ndidi
4. Casemiro
5. Rodri
Then the rest follow.. pic.twitter.com/tTRS7vTySH

Rice that should be in a pot is better than Ndidi?? https://t.co/fRLo1N8qDk

Don’t know if this stats is based on their release clause then I’ll have no issue with that
But if things should be set right the most valuable DM should be
Casmiro; Fabinho, Jorginho, Ndidi, Rodri then others
Mind you Kimmich is more RB than DM#Ndidi pic.twitter.com/xcR8YPXex3

Can someone explain to me how and why rice is above ndidi pic.twitter.com/4hlBtLB5Lx

Ndidi is only two years older than Rice; both players’ contract will expire same day. Ndidi has at least 20 more international caps (World Cup app too). Ndidi also beats Rice on every #PL stat even with both making their debut same season.

How is jorginho and rice above ndidi? He’s only behind fabino and caseimero. The rest can go and wash plates. But stats wise he’s number 1 self. Argue with ur keypads

Ndidi is an actual monster. Was even checking stats and he’s one of the only people who’s actually miles clear of rodri. He wins so many tackles and so many aerial battles. Underrated CDM https://t.co/OwuTkWHue9

It should be recalled that sometimes in December, stats showed Wilfred Ndidi is the best defensive midfielder in the world.