The heartfelt words still plead today, and ring true as ever: “Why will you die, O House of Israel?”

The Prophet Ezekiel informed his audience that it wasn’t God’s Will for them to suffer and die, but rather that they would turn from their self-destructive ways and live rather than suffer national defeat and deportation and they were only entertained by such an announcement (Ezekiel 18:30-32).

For years I have written letters to The Jerusalem Post and elsewhere, decrying the Israeli government’s submission to foreign authorities, sacrificing their national security due to unbearable pressure from the international community, and have encouraged the Jewish homeland to love and obey God and trust in Him — not fickle men or nations that have proven they can’t be relied upon (Joel 3:1-2).

Now I’ve come to the sad conclusion, the grievous understanding, that Israel’s leaders have often sold out their land and people to foreign interests, bloating their personal bank accounts at Israel’s expense, and that the pressure was often an excuse for them to do what they had already agreed upon: continue the lying peace process of phased destruction, dismantle the Jewish homeland, dismember their Mother piece by piece and pervert the Promised Land of Israel into an accursed “Palestine” (Ps. 83:4).

Israeli officials, bought and paid for like the political prostitutes they are, serve their German-Jesuit EU Masters (with plants in Washington, D.C. and other world capitols) and are gambling with the land and lives of every Israeli. They foolishly imagine that they can contain the breach in Israeli security that they are collaborating in (Daniel 11:32, Joel 3:1-2), a deadly serious breach that will break open and flood the Holy Land with foreign troops and sweep them away for the filthy liars they’ve become with their false visions of “peace” (Isaiah 28:14-18), based upon the BIG LIE OF EUROPEAN “GUARANTEES” OF PEACE AND SECURITY.

The kapos of compromise are destined to get stomped by the EU jackboot that will trample Jerusalem and pollute Israel (Zechariah 14:1-2). They will not escape the coming Holocaust that will pale the former and will scorch the American and British peoples as well.

Together, as taught by Brit-Am Israel, Herbert Armstrong in The United States and Britain in Prophecy, and others, we are the leading tribes of ancient Israel, Joseph (Joes/Anglo-Saxons) and Judah (Jews), and will be overthrown in a nuclear coup ignited by the modern Assyrians: GERMANY.

Germany is the driving force behind the EU empire in the making, under the influence of the Vatican who has never given up their Crusader-Kingdom dream of possessing Jerusalem!

How pitiful are those plaintive letters of concerned Israeli citizens and Jewish and Christian-Zionist supporters worldwide! They’re still foolishly believing, like I once did, that Israel’s only doing what they’re forced to do, against their better judgment.

It’s past time we all wake up to the harsh reality that Israeli leaders are on the take, that they’re playing “good guy/bad guy,” that successive Israeli governments from both the Left and the Right, are accomplices to murder — since they have the means and ability to remove the threat the Arab terrorists pose (with their daily calls for genocide against the Jews and the destruction of Israel), as boldly called for by Meir Kahane (Malachi 4:4), former Israeli Parliament Member and rabbi, but purposely choose not to protect their family and friends.

Successive Israeli governments, of the Left and the Right, have stood by idly while Judaism’s holiest site continues to be occupied by Nazi-Muslims who illegally deny Christian and Jewish religious rights upon the Temple Mount.

Israel has the power but lacks the will to exercise proper sovereignty over Jerusalem; Israel has woefully neglected the Temple Mount; Israel has failed to respect their biblical inheritance and liberate the Arab-occupied territories and immediately annex them, so Israel is losing it all, retreating further into their walled ghetto, and have slit their own throat by inviting disaster upon all: “peacekeeping” wolves in sheep’s clothing.

Israel is going to fall. The American and British peoples are also to suffer a brutal betrayal by the new kid on the block, the EU bully, at the same time. The nuclear sickle the EU will swing will soon cut us all down to size.

Our nations have failed to repent of their sins, to turn from our idolatry and immorality, to trust in God and not man, to love and obey God and not blindly follow tinsel traditions that contradict the holy commandments, so we’re as good as defeated and deported (Daniel 9:11).

The good news is that we don’t have to die, we can turn from our sins and save ourselves and live as individuals and nations, free, following the prescription of Scripture that President Reagan had his hand upon while taking his first oath of office:

“If my people, who are called by my name, will humble themselves and pray and seek my face and turn from their wicked ways, then will I hear from heaven and will forgive their sin and will heal their land.” 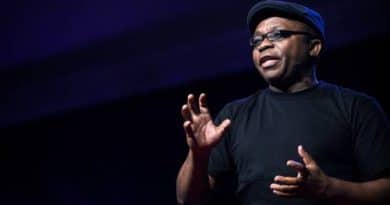 A Case Against Blasphemy In Nigeria By Leo Igwe