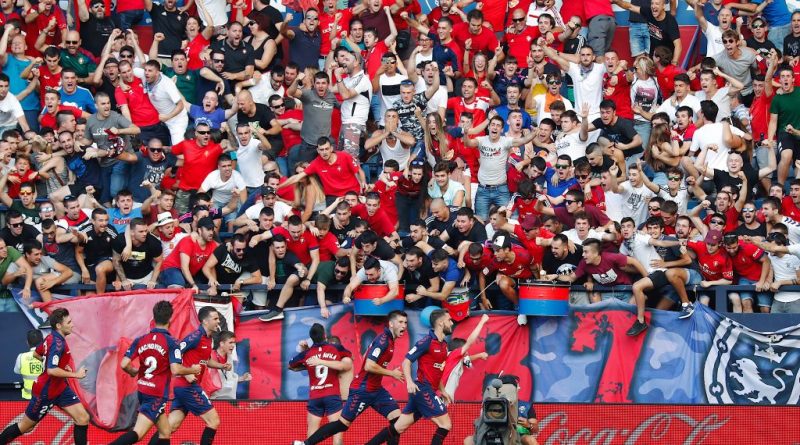 Sport
May 27, 2020May 27, 2020 Stan 0 Comments
LinkedInFacebookTweetPin
LiveChat will greatly increase the number of your satisfied customers. I've already tried it and I can recommend it as a go-to customer service tool! Sign up today for a free trial!

There are many stadiums across LaLiga that certainly know how to roar. When a goal is scored, when a penalty is awarded or when a full-time whistle is blown at the end of an important victory, many grounds across Spain create a deafening clamour. Only one can be the loudest, however, and, going by the decibel levels generated, that honour goes to CA Osasuna’s El Sadar.

Spooling back to the final day of the 2008/09 season, Osasuna took on Real Madrid needing a win and results elsewhere to go their way in order to secure an unlikely stay in the top flight. They entered the 38th and final matchday inside the relegation zone in 18th place, but within touching distance of R. Sporting, Real Betis, Getafe CF and Real Valladolid.

A dramatic 2-1 victory over Real Madrid that day, combined with Getafe drawing and Real Betis and Real Valladolid drawing with each other, meant that Osasuna leapfrogged all three finish the season in 15th place, sending Real Betis down instead.

Following first-half strikes from Gonzalo Higuaín and Jaroslav Plašil and with results elsewhere not going in Osasuna’s favour, the Pamplona side looked to be on their way down to LaLiga SmartBank. But as the hour-mark approached, up stepped Juanfran Torres – who would go on to play for Atletico de Madrid for many years – to slam a frankly outrageous volley from outside the area past Iker Casillas.

The 19,239 crowd went wild, screaming so loud in their euphoria that the roar was measured at 115.17 decibels, a noise level similar to the sound made by a jet engine. That remains the loudest sound ever recorded at a LaLiga stadium to this day. The previous record of 112 decibels, registered during an El Clasico clash between Barcelona and Real Madrid in 2000, was set on the day Luis Figo returned to the Camp Nou for the first time after his controversial world-record move earlier that summer. Even though the registered attendance at El Sadar that day was under 20,000, the importance of the situation, the brilliance of the goal and the architecture of the stadium helped to produce this record roar. Osasuna’s stadium is a compact ground with closed corners and a roof covering each of the stands, a structure which helps to keep the sound in. Even today, one decade on, the stadium continues to produce plenty of noise and remains one of the most intimidating venues in all of LaLiga for away teams to visit. Osasuna’s record-breaking 31 home league match unbeaten run between April 2018 and November 2019 was based in no small part on their fervent and almost unrivalled home support.

Those involved at the fan-run club expect the ground to produce similarly exhilarating moments in the future. Through an open and inclusive referendum process, Osasuna fans and members recently voted on plans to redevelop El Sadar and opted for the option which promises to create a ‘Red Wall,’ potentially including safe standing sections.

The capacity will also be increased, views of the pitch improved and acoustics enhanced even further. It’s an exciting time for the club, even more so because the fans have been involved throughout this process. As club president Luis Sabalza said: “We realised that the supporters themselves should be the ones to make such an important decision.”

The future at El Sadar is bright, and loud. After Juanfran’s relegation-defying match winner in 2009, he told reporters: “There’s no better stadium than this to celebrate a goal like that.” Future Osasuna match-winners will surely discover this themselves. And who knows? They might even break another decibel record!

LinkedInFacebookTweetPin ipNX Nigeria Limited is one of Nigeria’s fastest growing Information and Communications Technology companies. In our business, we connect