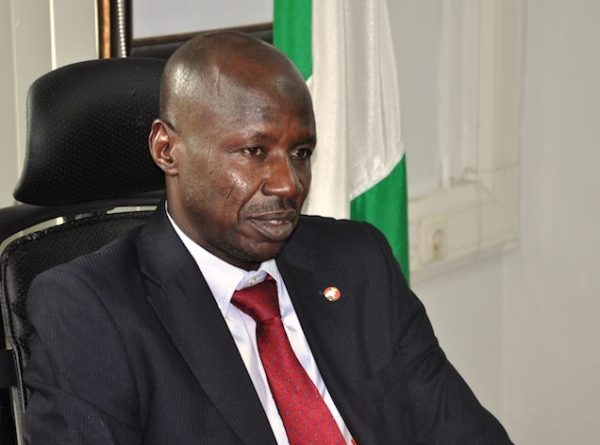 Crime
June 20, 2020June 20, 2020 Mary 0 Comments
LinkedInFacebookTweetPin
LiveChat will greatly increase the number of your satisfied customers. I've already tried it and I can recommend it as a go-to customer service tool! Sign up today for a free trial!

Ibrahim Magu, acting chairman of the Economic and Financial Crimes Commission (EFCC), escaped the axe by the gators last week. He was nearly fired. The EFCC chief’s nearly five-year incumbency has been a wild play of intrigues, distraction, and confusion.

I recall in 2016 when the Senate declined to confirm his appointment, citing a DSS report which was damnatory in complexion. I was startled at the content of that report. I broke the story revealing the details of the intelligence at a time Nigerians were on the edge to get the gist unseasoned.

For the sake of perspicuity, I have reproduced an abridged version of the DSS report here.

“Magu is currently occupying a residence rented for N40m at N20m per annum. This accommodation was not paid [for] from the commission’s finances, but by one Umar Mohammed, air commodore retired, a questionable businessman who has subsequently been arrested by the secret service. For the furnishing of the residence, Magu enlisted the Federal Capital Development Authority to award a contract to Africa Energy, a company owned by the same Mohammed, to furnish the residence at the cost of N43m.

“Investigations show that the acting EFCC chairman regularly embarked on official and private trips through a private jet owned by Mohammed. In one of such trips, Magu flew to Maiduguri alongside Mohammed with a bank MD who was being investigated by the EFCC over complicity in funds allegedly stolen by the immediate past petroleum minister, Diezani Alison-Madueke. Furthermore, the EFCC boss has so far maintained a high-profile lifestyle. This is exemplified by his preference for first-class air travels. On 24 June, 2016, he flew Emirate airlines first-class to Saudi Arabia to perform lesser hajj at the cost of N2.9m. This is in spite of Mr President’s directive to all public servants to fly economy class. Magu has fostered a beneficial relationship with Mohammed who by his confession approaches clients for possible exploitation, favours and associated returns.”

However, despite the senate’s repudiation of Magu’s appointment situated on this DSS report, President Muhammadu Buhari re-nominated him. But the Senate would not cave in.

The reaction to the decision of the senate at the time was that some corrupt elements in the national assembly were trying to derail the anti-corruption efforts of the president.

But has the tune changed?

According to a THISDAY report on Friday, Abubakar Malami, minister of justice and attorney-general of the federation (AGF), has asked the president to sack Magu as acting EFCC chairman.

The report said Malami asked Buhari to sack Magu over “22 weighty” allegations, including the diversion of recovered loot. Though the news story seems to suggest Magu is a victim of witch-hunt, can these allegations rest on nothing?

I must admit, Magu has shown utility and fervour in the fight against corruption. His passion for the job is contagious. But then again, there are ponderous allegations hanging around his neck and bugging him down.

Again, Magu cannot be faulted regarding dedication to his job, but there are areas where he is deeply flawed. He has shown a mitigated capacity to understand and interrogate issues. I recall in February 2020 when a leading Nigerian online newspaper reported that the acting EFCC chairman said he is strongly convinced that corruption is the cause of COVID-19. He said this without nuance or context, advertising a deep intellectual chasm.

Also, he has sort of revised the agency to a personality cult. The foibles and defects of Magu are no longer distinguishable from the character of this institution. As I once said, where Magu falters, the EFCC stumbles.

In August 2019, the EFCC Twitter handle @officialEFCC tweeted a photo of some top staff of the agency tagging them ‘Magu boys’. I said then that this bilge accented the execrable customization of the anti-graft agency, and it explains why the agency operates neurotically in the character of its head.

The acting EFCC chairman once declared that a suspect stole $2.5bn without the pronouncement of a court — while his operatives ran amok invading nightclubs to arrest random party animals in the guise of hunting yahoo-boys.

Really, the reluctance of public officers to distinguish themselves from their offices is the reason for abuse of office. This is where Magu is fatally remiss — by my own estimation.

To say the least, it is corruption as well when individuals expropriate public offices, design them in their own image and build a temple in them for everyone to worship. Corruption is not only measured in naira, pounds, and dollars.

The president must stop dilly-dallying on Magu. He has to set up an independent panel to look into these allegations and put Magu out of his misery. He must take an objective decision on this – to re-nominate him to the Senate for confirmation or not. As, Justice Ijeoma Ojukwu of the federal high court Abuja said, he holds the ‘’yam and the knife’’.

Fredrick Nwabufo is a writer and journalist.
Twitter: @FredrickNwabufo