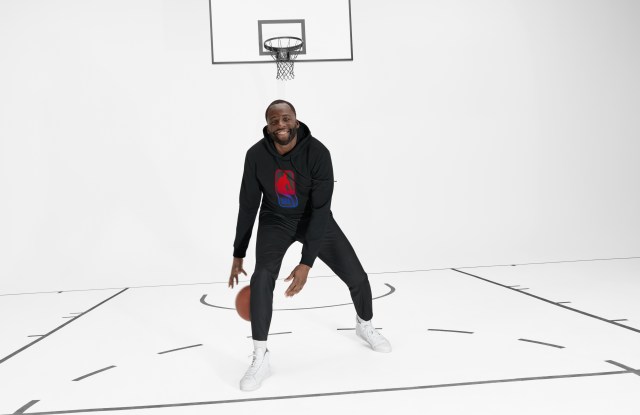 
Draymond Green, the three-time NBA All-Star and power forward for the Golden State Warriors, has signed to be the brand ambassador for Hugo Boss and the face of its 2021 Boss x NBA campaign.

As reported, Hugo Boss teamed with the National Basketball Association to publicize its more-casual offering. The deal, which kicked off at the start of the 2020-21 season on Dec. 22, includes two co-branded capsule collections, the first of which will launch on Feb. 15.

Green said he believed working with Boss was “a good fit” and he’s a fan of the brand’s “very sleek, mature look. And I love the fact that it’s affordable. It’s not extremely expensive like most of the brands in that space.” The 30-year-old from Saginaw, Mich., also pointed to the brand’s long history as another selling point for him, along with the fact that he felt comfortable with their style.

Although NBA players have now become famous for their propensity for fashion, Green has other thoughts about the issue. “I wouldn’t say I’m interested in fashion,” he said. “I’m interested in style.” In fact, people who say they love fashion often can’t describe the fabric or silhouette or know where it’s made, he said, so it’s “disrespectful” to say they’re fans of fashion. “I like to look nice and appreciate when people wear things that show their personal style,” he said.

For Green, his personal style is often dependent upon the situation he’s in. Walking into some high-profile arenas requires a suit, while for others, he’s more likely to be in nice jeans, a bomber and Converse sneakers, or even a straight-up jogging suit. “Like my game, I try to truly embrace versatility,” he said.

One thing he is particularly partial to is a good watch. “I absolutely love watches, it’s one of my vices,” he said, along with art, which he’s started collecting over the the past two years. But one thing he’s not is a sneakerhead — at least not anymore. “I used to be, but not now.”

Green has worked with Nike on his own basketball shoe and said he’s open to one day having his own signature shoe and/or apparel line, much like his teammate Steph Curry has with Under Armour. “There are not many people who have successfully had their own signature line,” he said. “Steph is trying to build a brand and everyone is capable of that. But it would be an honor.”

Turning to his team’s chances this year, Green said that although their record is 11-10, he’s hopeful that the tide will turn. “We’re a young, inexperienced team and we’ve hit some bumps, but we have tons of potential. If you look at us at the beginning of December at training camp and now, it’s two different teams.” And if the Warriors make it into the playoffs, he believes they’ll have a shot. “It’s all about the match-ups, but I don’t think there’s any one team that’s dominant,” he said.

One thing he’s happy about, though, is that the NBA is not playing in a bubble this year. The Warriors weren’t good enough to play in the bubble last season, he said, and for that, he’s actually glad. “I wasn’t upset about that,” he said. Instead, the hardest part for him has been playing in empty arenas. “Having no fans is a tough challenge. As NBA players, we learn how to play in front of fans.” But despite all the COVID-19 protocols that the league has to endure, Green is just happy to have the chance to play at all. “We’re blessed to be able to go out there and do what we love to do — and have a job. The unemployment rate in America is alarming and we’re very appreciative of the situation we’re in and that the fans still support the NBA.”

In the campaign, Green wears pieces from the capsule mixed with the brand’s jersey suits, bombers and Harrington jackets, trousers and cotton trenchcoat to further highlight its lifestyle offerings. Others featured in the campaign include NBA G League forward Isaiah “Zay” Todd, Grammy-nominated rap artist Aminé and jewelry designer Greg Yuna, among others. The campaign was shot by photographers Ellington Hammond and Darryl Richardson, with creative direction by RanaVerse. 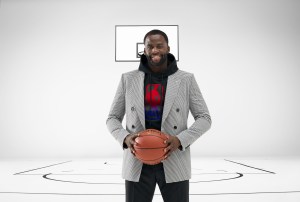 “Partnering with the NBA and securing an NBA star in Draymond Green, offers us the ability to design regional and national relevant products for Boss with the best teams and talent that basketball has to offer globally,” said Ingo Wilts, chief brand officer Hugo Boss AG. 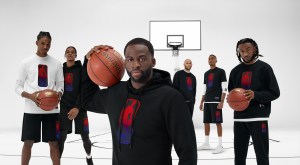 “Inspiring our customers with new and compelling stories that cater to their needs is our top priority,” added Stephan Born, chief executive officer and president of the Americas for Boss. “This is why the collaboration with the NBA is a great opportunity for Boss to offer products that increase brand awareness and equity in the U.S. At the same time, it strengthens the important casualwear segment.”

The spring capsule will be available in North and South America at Boss stores and online, as well as at the NBA Store and Fanatics, and select retail partners such as Bloomingdale’s and Nordstrom. A second collection for fall will launch in October and distribution will be expanded into Europe as well.