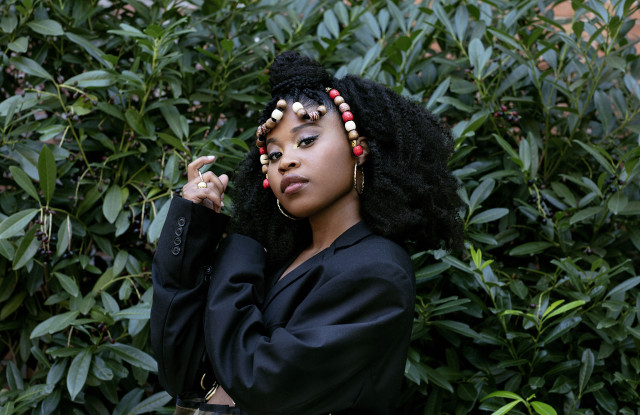 
Dominique Fishback loves Meryl Streep — “Miss Meryl Streep” — which is no surprise, it’s Meryl Streep. But Fishback likes the validation that Streep has earned over her career. You just can’t argue with a Streep performance, no matter the movie.

“When I was in school, rightfully so, they say as an actor if you go for theater, you really don’t have anything to show for it. You’ll get a diploma, a bachelor’s degree, or whatever, but what do you have to really show for it?” Fishback says, over Zoom from the couch in her Brooklyn apartment. “The showcase is always a big deal where you want to get an agent, you want to get a manager, and I remember feeling like, ‘You know what? I’m not going to put all my attention on getting the agent. I want to put my attention on the craft of acting, so that when I get into the room, I could always deliver.’ When I got the opportunity, I could be like Meryl, where even if somebody doesn’t like a project that she does, or maybe doesn’t like her choice in movies, they can never say she can’t act. If I could get to that place where if they don’t like it, but they look and say, ‘Well, that girl can act,’ then I think I’m good.”

After breaking out in “Show Me a Hero,” “The Hate U Give” and “The Deuce,” the 29-year-old is starring alongside Jamie Foxx and Joseph Gordon-Levitt in the ambitious new Netflix movie “Project Power,” a sci-fi action thriller out today. It’s the latest choice from the clear-eyed performer, who has been steadfast in the kind of career she wants to build since she started, waiting for the right project each and every time.

Fishback was excited about “Project Power” from the first e-mail she received, an enthusiasm that doubled when she learned Foxx and Gordon-Levitt were not just in talks but solidly attached.

“That really excited me, but I also told myself, ‘Now calm down because if the character isn’t right you’re not going to do it,’” Fishback says. “I want longevity in my career, and so I have to think about specifics and be strategic and think about what it means. I want to always have fun and not put myself in a box, and I also want to think of it as work and my career.”

She slowed herself from getting too excited because her character, Robin, seemed too good to be true.

“I couldn’t imagine her. I thought it would be a cool, cute girl with three or four scenes, and then she’s out of the movie and it would really be Joseph Gordon-Levitt and Jamie Foxx,” Fishback says. “But to my surprise, Mattson Tomlin, the writer, wrote an amazing character for an action film where you know who she cares about, you know her motivation for everything. She was a fully realized girl on the page. I would love for somebody to tell me, but I don’t remember a time where there was a young Black girl who took up space like that, where these guys who weren’t her father cared so much about her that they would give their life so that she can live. We don’t get that as Black girls often.”

Fishback grew up in East New York, Brooklyn; when she was eight years old, a children’s musical theater group called Tada! came to her school and performed, “and my whole life just lit up,” she says.

She auditioned repeatedly for three years but was never accepted. Meanwhile, she would stay up late at night watching “I Love Lucy” and “Sister, Sister” and take notes on what she would do differently if she were in the scenes.

“My mom told me, ‘I think you should try acting. You’re so dramatic. I think you can really do it,’” Fishback says.

As a high schooler in Brownsville, she turned to Google to find free acting programs and stumbled upon a youth Shakespeare program.

“I did not get in, but they called me and said, ‘There’s a free two-week art seminar where you can do musical theater, act, write, whatever you want to do. Would you like to do it?’” she recalls. “And from there, I got with the MCC Youth Company, and I started writing and acting at the same time.”

“My main goal always was to be versatile. I remember just being from Brooklyn, having a thick accent in school and being made to feel that that would limit me — and so I said it wouldn’t,” Fishback says. “What I’m learning is about the authenticity of self, to really bring yourself — that’s what they’re looking for when you go into an audition room. And it kind of doesn’t matter if I talk real hard or I talk like I’m from Brooklyn, because there is a thing called dialect work and there is a thing called acting. You know what I’m saying? And so when it’s required, I can pull it out, speak with distinction. I can talk to a dialect coach. I can ask them to have a dialect coach on set. And then I could act and look at the words and learn it here and infuse myself in different cultures and different people.”

She’s maintained an interest in working on multiple art forms at once. The beginning of the pandemic fostered a creative streak in Fishback: She was getting up at 7 a.m. and going all the way until midnight, learning to play piano, reading, working on writing a novel.

“And then George Floyd was murdered and Breonna Taylor, and then I lost all resolve,” Fishback says. “I am a writer; I have a one-woman ‘Subverted’ and it’s about the destruction of Black identity in America and it talks a lot about police brutality. We like to believe that art makes a difference, and I know that it does — but I felt pretty hopeless, like, ‘Oh, what are you actually doing? Are you going to sit and write about it some more?’ But I have a lot of friends and good people in my life who are like, ‘No matter what your job is, you can use your talent and your purpose to make a difference, and if we’re all one then we all can function as one.’”

More from the Eye: