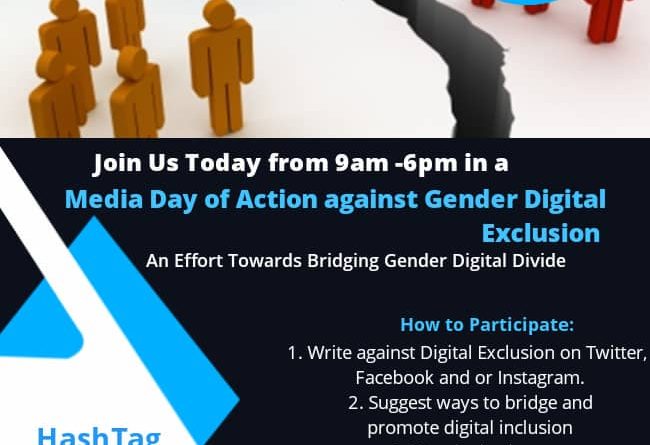 Two days ago, a team of staff of CITAD went to Shara in Sumaila Local Government area of Kano to conduct a COVID 19 sensitization programme for teachers and students as well as parents of Shara Primary School, a community school that CITAD and the community established about four years ago. Although enrolment had increased but we found a number of the girls had dropped out. In response to the unvocalized question of our team members, the Community leader said that they had been married off.

They were still to be functionally literate and painfully they had reached the end of their education pursuit. It also in a way marked the end of the chance for them to get formal entrepreneurship and vocational education. And today we here talking about digital gender inclusion in a context that girls horizons are not even given the chance to see beyond the primary school. These Shara girls have been digitally excluded because digital inclusion requires functional literacy. Without being literate, they cannot interact with the various devices (or at least many of them) as to get the best from access to information technology.

But Shara is only one instance at which you are painfully exposed to the trajectory that tells you how far behind women are left digitally. The lookdown presented another question. CITAD undertook a research and found a dramatic increase in incidence of domestic violence during the period of the lockdown. While technology provides a mean for victims to communicate to the outside world, for assistance, support, remedy, many of these women suffered, locked in their homes because they could not access technology to come to their aid.
Three key issues were responsible for this. First, like the Shara girls, women in general have lesser opportunities to acquire education than men. And as the point made earlier, without education you cannot make effective use of the treasure that is online. The second is that women are generally socially, economically, educationally and politically marginalized and therefore on are generally poorer. They constitute the great majority of the people living below the poverty line in the country. This is why a number of researchers around poverty say that poverty has a feminine face in Nigeria. The effective use of technology is dependent upon affordability. With more women poorer, they are less able to afford technology and hence end up unable to access and it us.

The third point is about social norms in the society. Social norms as articulated round the vestiges of patriarchy condition and frame the way in which technology in inserted in society and used by both men and women. Women are generally discouraged from using internet at two levels. At one level, women, especially married ones, are not supposed to communicate outside circles of people with who their husbands may not be comfortable with. This patriarchal social expectation in the communication scope of women expect them not indulge in “frivolous” communication and should therefore not be seen to using the social media and even the internet as a whole. If they must use the internet, they should use it sparingly. Stories, some of which may be anecdotal, have it that many marriages have collapsed on account of the wives using social media.

Patriarchy society does not expect a married woman to have a male friend, talk less of hundreds, if not thousands Facebook friends, many of  who she probably does not know offline. She would have many “followers’’ on twitter and belongs to several chat groups on whataspp. All these would be frown at. This aspect of patriarchy is about control of the woman’s communication sphere by man.
The second level at which patriarchy operates is a mirror image of the control level which is that women are seen as objects of pleasure, lacking subjectivity of their own. This is at the root of gender based violence in society. Gender based violence is not limited to the physical space or offline relationships. It is also reflected in online behavior, giving rise to the concept of gender based violence online.

While social control seeks to place restriction on the use of internet by women, gender based violence online creates fears that make women to not want use the internet. Like gender based violence offline, online violence against women tends to be less visible. In fact it is less visible than offline violence, because it takes place mostly at the private level. For this reason, there is little attention about it and in some cases the résistance to accept that in fact it is a major problem.

But there is also an addition dimension that is often overlooked which is about access to policy structures in the society. These structures shape the ways we live, including the way we access and use technology. These structures act in such a way as to exclude women and their input in the policy making process. This has two effects on the types of polices we get. First, men who are dominant players in the policy making environment do not experience gender digital marginalization and therefore do not understand as to make effective policies to address it. Secondly, women who experience digital marginalization do have knowledge and experience of technology that could make them provide sound policies to address their exclusion. Either way we end up with inadequate policies that do not solve the problem,
One specific aspects of gender marginalization that is upon lost to men is about gender harassment online. As it is directed at women, men hardly see and is therefore invisible. You do not address an invisible problem. And so to the majority policy makers, this problem hardly merits attention. Yet, it is core to addressing digital exclusion of women for it works two ways. One, women fear the internet because of the online harassment and withdraw as well as internalize this fear to the point that it becomes instrumental for their distancing from technology. On the other hand, men use it to point to the need to protect their wives, sisters and daughters from this danger by erecting a barrier against the use of the internet by women. The result is that the two reinforce each other and serve to widen the digital marginalization of women.
As we mark this Media Day of Action against Gender Digital Exclusion, I would like to invite us to a handshake across the table to understand the pains of digital exclusion not just on gender lines about for the whole society, resulting from leaving women digitally behind. To do that, we must accept certain realities. One of this is that the exclusion of women in the policy spaces and other digital space spaces is not accidental. It is the construction and imagining of these spaces as masculine by patriarchy. Second, acquiring ICT in itself does not in itself effectively contribute to addressing the gender digital divide without addressing the negative representation and portrayal of women online.

We have to engage in a handshake that has to bring both men and women into a mutual dialogue on technology deconstruct the myths around the internet. Men and women work together to discuss how the internet is a tool that can help rather than subvert family structures. Ultimately, men and women have to work together to overcome the constraints that patriarchy has placed before women in the use of technology. The handshake is not an easy conversation. On the part of males it signals acceptance to give up on some privileges while for women, it requires rethinking of normalized ideas.