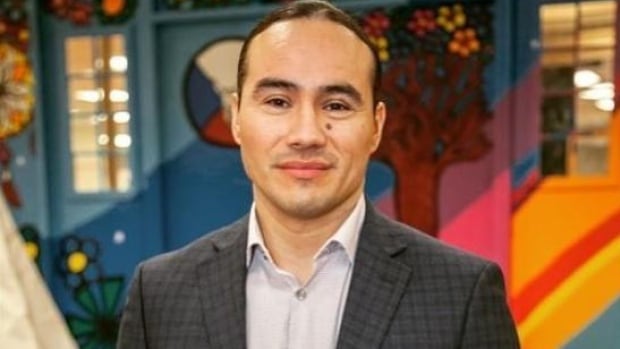 Once Michael Linklater discovered basketball at age 12, he couldn’t stop playing. There was something about the game that ignited his passion and determination. Even though he wasn’t a tall kid, he decided he would become the best.

“I always pushed myself to the point of becoming tired or exhausted and once I hit that point I looked at how I could push myself further… I think those little incremental pushes is what created big strides throughout my career,” he said.

The 38-year-old Cree father of four is from the Thunderchild First Nation and has called Saskatoon home since age 10. Today, his career carries a long list of accolades that stretch beyond the court.

Since becoming a CBC Future 40 winner in 2014, he’s kept a busy schedule, taking time to speak to Indigenous teens and run basketball clinics and camps, as well as leading Team Saskatchewan as a head coach at the North American Indigenous Games.

He’s led a team to the Fiba 3×3 World Tour finals for several years, winning second in 2014. A few years later, in 2017, he was named Most Spectacular Player at the event. Other honours include an Indspire Award and the Canadian Sport Award for Inclusion.

Now retired from basketball, he looks back at his accomplishments with a fondness for those who doubted him. He’s always made a point of acknowledging the people who thought he couldn’t do it.

“I took a moment to really, truly, genuinely thank the people who doubted me. Because their disbelief in my success is something that drove me … it’s something I think we fail to acknowledge as human beings. The negative things that actually helped us,” he said.

“Being someone who is under six feet tall and who is successful at basketball is a testament to how much desire I had to succeed.”

In addition to passion and sheer determination, Linklater credits sobriety for his success. He said he saw friends losing their way in drugs and alcohol at a young age. He also saw devastation in his own family. He said both his biological grandparents died of alcoholism and his biological mother still struggles with it.

“I am a first generation sober person in my family,” he said, noting that his decision to completely abstain from drugs and alcohol was one he made deliberately as a young person.

Linklater said damaging stereotypes about Indigenous people being “drunks” caused him to pause as a boy.

“It was something I couldn’t defend as a kid in Grade 6,” he said. “So I wanted to make sure the next generation, of specifically Indigenous youth, could have someone they could refer to, to say that is not true.”

“We as Indigenous people have struggled with alcohol since the day it came to this continent,’ he said.

Linklater said the abuse and torment that his ancestors went through, especially in residential schools, exacerbated the problem as alcoholism became widespread and was passed down through generations.

He said him that others like him have decided to break the chain. He said he knows many First Nations people who have decided to stay sober to create a better life for themselves and their families.

Linklater is channelling his determination into creating a better life for future generations.

Linklated said that first time he was asked to speak to a group of his peers was at age 16. Since then, he has wanted to redirect the light that was placed on him to important issues.

He founded Boys with Braids to create a support system for Indigenous boys and their families who were facing bullying at school and in their communities due to their long hair. He is also working with the Saskatoon Public Schools on literacy initiatives and Canada Basketball on new ways to engage young Indigenous players.

His own children — two girls and two boys — keep him on his toes, too. As he looks to the future, he’s certain he will continue to push for change.

“Everybody, how they get good at anything, is just sacrificing a lot of their leisure time to dedicate themselves to their craft. For me, I never took no for an answer. And, I always used my setbacks or failures as motivation to continue to push forward,” he said.

Do you know an athlete who is pushing the boundaries of their sport? Nominate them to become a 2020 CBC Future 40 today. Nominations close on Sunday, Nov. 22 at midnight.