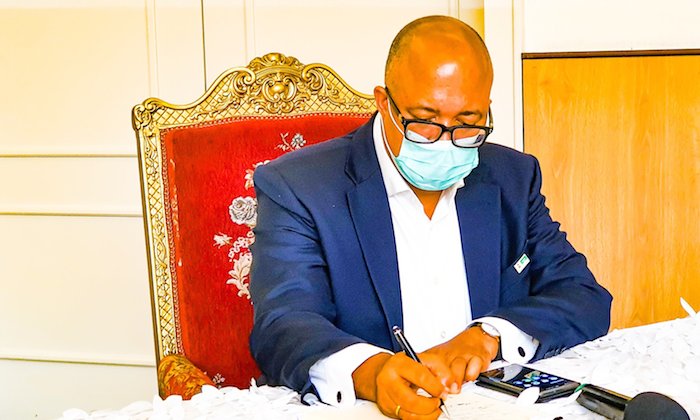 Federal government on Monday said current drop in the cases of those who test positive for the Coronavirus is not a sign that the virus is abating and cannot be celebrated yet.

The Director General DG of Nigeria Centre for Disease Control, NCDC, Chikwe Ihekweazu, while speaking at the national briefing of the PTF on COVID-19, on Monday, in Abuja, attributed the low rate to “low test coverage”

The DG NCDC while making specific reference to the reported drop in reported cases of the virus to 97 and three deaths arising from the disease on Sunday, said Nigeria is not yet out of the woods, as the country is still threatened by the Coronavirus.

He warned that although the country has recorded a decline in number of COVID-19 cases, it’s not yet celebration time to celebrate as Nigeria has not tested adequately and therefore risks a resurgence.

Chikwe Ihekweazu, informed that the country recorded a 36 percent decline nationally in August compared to July, while the positivity ratio dropped from 20℅ in June to 7% in July.

“You might think that that is good news and we should he celebrating, unfortunately, we cannot celebrate this untill we test sufficient numbers in every state in the country.

According to Ihekweazu, “the only states that can celebrate decline in cases confidently are Lagos and Kano states as well as the FCT, because they have tested high numbers, but the same cannot be said at the National level because some states are but testing”

He decried that the NCDC cannot make any interpretation on the data in Taraba Adamawa, Kogi, Nasarawa, Niger, Kebbi Zamfara, jigawa and Yobe states.

“We do not have enough data coming out of these states to ascertain if we are improving or not or where are we.

“So we have to work together, in summary, it’s way too early to make any interpretation whether we are flattening the curve or not, some interpretation can be made in Lagos, FCT, because they are testing enough, but we can’t do this in a national level”.

The DG noted that countries that seem to have seen a decline are seeing resurgence of cases.

He further announced that the NCDC and the NIMR have launched a COVID-19 household Seroprelevence surveys in selected states in Nigeria to better understand the burden of the virus in the country.

He said the surveillance will be carried out in Gombe, Enugu, Nasarawa and Lagos states.

The National Coordinator of the PTF, Sani Aliyu expressed concerns over Nigerians inability to embrace testing, saying that there are 69 accredited NCDC laboratories where people could work and get tested free across the country.

Aliyu also announced that the next batch of the National Youth Service Corps are expected to resume soon and must be tested on resumption.

The PTF also noted that non conformity to non pharmaceutical interventions as prescribed by the NCDC and world health organisation could see Nigeria returning back to the the earlier stage of the virus in the country.

Aliyu therefore, urged Nigerians to go for test in accredited laboratories across the country,with an emphasis that test is free.

“The numbers are going down,but the virus is not going away. We must test more. We’re not convinced we are flattening the curve. People needs to test more.

“Covid tests in Nigeria are free unless you’re testing for the purpose for travelling. No public laboratories can charge for covid test at the moment and payment apply to only private laboratories.

“Also, consider testing if you are among the vulnerable groups,particularly if you are above the age of 60 or you have an underlining conditions or also looking after someone who has covid or has exposed yourself.”

He observed however that less than 50 percent of Nigerians say they would get tested if they have exposed themselves to coronavirus.This according to him, is a worrying number for the federal government , noting that,”What this suggests is that there may be a large number of persons who may be positive without knowing it.’”

“If you notice you cannot pay for a test,note that there are 69 laboratories certified by the NCDC and all of them provide free test.

Speaking further,he said,”We’ve released money to money to the state governments, which each state government was given a billion naira which is for the purpose of driving the covid responses and we are urging them to priortise testing in addition for the surveillance activities of the covid 19.”

The national cordinator urged state governments to publicise their sample collection locations,so that people can access the test.

“Compliance to non pharmaceuticals is low,and if you are among the vulnerable group please protect yourself,”

Over 1000 has died regrettably he said,urging those who have had personal experience with the pandemic to assist in the advocacy against the spread of the virus.

Drawing experience from the international communities, the PTF noted that Israel, has re-introduced a three-week lock down, the United Kingdom is considering another lock-down phase, Spain is enforcing a partial lockdown in Madrid, and France – amidst protests by its citizens.

“They have also introduced stricter measures to contain the virus. Similar stories are coming from South Korea, Iran and the number of fatalities is approaching 200,000 in the USA. The WHO has, thus, advised that everybody should learn from lessons of the first wave especially as “no one is safe until everyone is safe”.

Chairman of the PTF on COVID-19, Boss Mustapha, announced that the organization will be escalating testing for the Virus under a national week long testing program as part of the activities marking 60th Independence Anniversary.

“ The Virus has refused to adhere to our investments”

“ Let me share with you a global picture to buttress the foregoing. Over the last three days, the global cases passed the 31 million mark and it took only four days to get there from the 30th million. The USA crossed 7 million cases and continues to report a high daily caseload of over 30, 000 daily. We continue to see highest daily numbers from India.