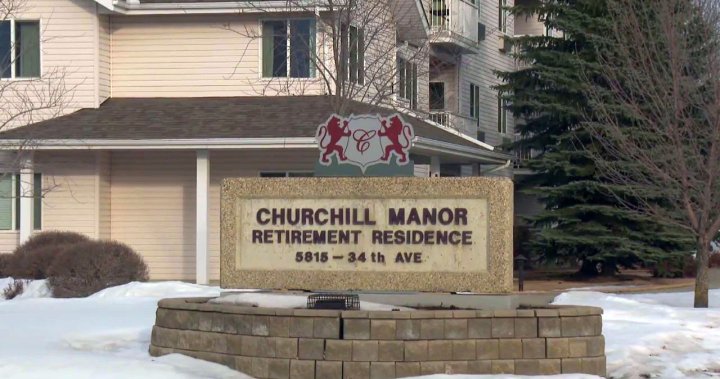 Family members of a senior living at an Edmonton retirement home are voicing concerns after it became the site of Alberta’s first outbreak involving a COVID-19 variant.

Alberta Health said Wednesday a case was identified at Churchill Manor on Friday. As of Thursday, 36 staff and residents have tested positive for COVID-19, Atria Retirement, the company that runs the home, said.

“Residents who have tested positive remain in their apartments, where they are in isolation and receiving care from Alberta Health Services nurses who wear full PPE.”

Alberta’s chief medical officer of health said Wednesday that 19 of the cases tested positive for a variant.

“Local public health teams and the operator are taking this outbreak extremely seriously and working closely together to limit spread and protect everyone involved,” Dr. Deena Hinshaw said.

Churchill Manor is an independent living setting. As it is not licensed, the province does not oversee day-to-day management or compliance at the facility. However, given the outbreak, AHS is now involved to ensure residents and staff are protected.

“Local health officials are working closely with the facility and have confirmed that the enhanced variant outbreak protocols issued last week are being closely followed to prevent further spread,” a spokesperson for Alberta Health said Thursday.

Hinshaw said healthy residents of Churchill Manor received their first dose of vaccine on Monday as scheduled. While that would not have protected those already exposed, she did say it will help them build up their immunity more quickly.

Rose Zinnick, whose 94-year-old father lives in Churchill Manor, said she was surprised when the facility started loosening restrictions before everyone had been immunized.

“They were going to start their little exercise classes, you know, limited to five people,” Zinnick said.

Prior to that, she said the whole site had been on a strict lockdown since the beginning of December.

“When my dad went for dinner or breakfast… he said there was four people at their table and they have just little tables.

“No one has been vaccinated yet — their vaccinations weren’t booked until March 1 — and they opened all this up on the 15th.”

Zinnick said her father received his first dose of vaccine on the morning of March 1. That afternoon, she said, he was told he had tested positive for COVID-19.

“He was quite upset,” she said. “I’m hoping — he’s pretty tough guy — that he’ll breeze through. But if there’s 26 people there that are infected, you know that they’re going to be more people that are going to be infected.

“How many people of these people are going to die? There’s a lot of old people in this building,” Zinnick said.

“They could have waited two weeks until they got their vaccines and then sorted things slowly.”

In a statement Thursday, the company said its focus has always been on the health and wellbeing of residents and staff. Grange said the site makes decisions based on local disease activity, and escalates or adapts protocols as conditions evolve to keep people safe and allow them to “live their best lives under the circumstances.”

“After months of relative success with keeping COVID-19 out of our community, we began to slowly de-escalate protocols on Feb. 12 while still requiring face masks and regular screening.

“This included offering dining with a limited number of residents seated at a socially distant table with the same individuals for meals.

“Our protocols have always remained consistent with the guidelines from Alberta Health Services.

“When the first positive case was identified, we immediately escalated our precautions, including asking that all residents remain in their apartments, delivering meals to residents’ apartments and prohibiting resident gatherings. Our employees and essential visitors are required to wear the appropriate PPE at all times, and our daily screening of staff for temperatures and symptoms and frequent monitoring of residents for symptoms continues. These protocols will remain in place to protect our residents and prevent any further spread of the virus.”

Grange said Atria Retirement is in daily contact with AHS, which has also reviewed — and is satisfied — with its protocols.

READ MORE: The big picture: a timeline of increasing COVID-19 variants in Alberta

Zinnick’s daughter Shauna Chambers is also worried for her grandfather, and disappointed with the decisions the retirement home made leading up to the outbreak.

“I asked a lot of questions about whether or not safety rules were being followed. And I was told yes, to the letter. But… if people were gowned and masked and gloved and six feet apart and being screened upon entry, this couldn’t have happened.

“I would like somebody to acknowledge that this was a very detrimental lapse in judgment, and that this isn’t going to be repeated here or at any other facilities that they manage,” Chambers said.

The premier pointed a finger at the federal government, suggesting its insufficient performance when it comes to procuring vaccines.

Jason Kenney spoke Thursday about variant outbreak at Churchill Manor, saying it unfolded just as residents were to be vaccinated.

“They should have been vaccinated weeks ago, like they were in similar settings in the United States, Israel, the U.K. and many, many other countries.”

Hinshaw said Alberta health officials are making difficult decisions about vaccine prioritization and knows there are many populations who will greatly benefit from being immunized.

She urged caution, saying even after being vaccinated, Albertans must follow all the public health rules.

“We know the vaccine is rolling out right now to residents in these facilities,” she said. “We also know it takes two to three weeks after the first dose to be effective.”