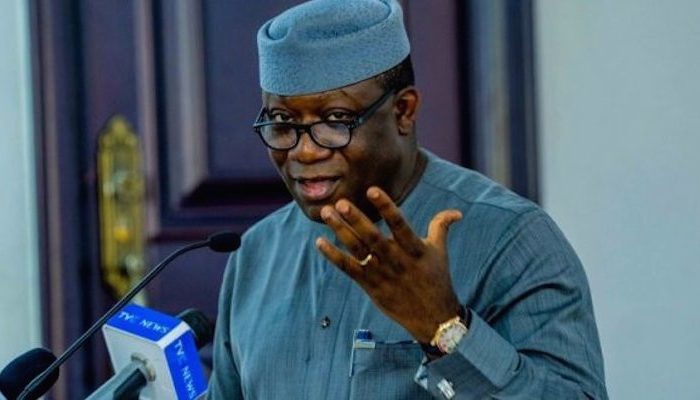 As the Federal government ramp up preparations for administration of the COVID-19 vaccines, government is said to be leveraging on using top influencers, Imams, Bishops, top musicians, highly successful Nigerians and sports personalities, to drive vaccines acceptability.

Speaking after what he described as “ a routine meeting with Mr. President”, Fayemi said the meeting reviewed “ a number of issues that are of interest to me and my colleagues, the governors. Security, economy, vaccines management and the general outlook for 2021”

The use of top influencers is being proposed as a way to reduce the growing negative misconceptions over the efficacy of the vaccine and its side effects which has dominated public discussions in recent weeks.

Following government decisions to roll out 100,000 doses of vaccines in Nigeria, there have been fear of alleged resistance to taking the vaccines, emanating from Nigeria’s recent experience with the Polio vaccines

The Governor said the management of the vaccines remains the number one priority as it relates to public health and risk communication.

“I commended the Presidential Task Force on COVID-19 for at least, wanting to use Mr. President and the Vice President as their publicity vehicles for reassuring those who may have their doubts about vaccines use that, this is no threats to them.

“But the good thing is, Mr. President has agreed with me that he would convey to the PTF the necessity of using other influencers, maybe the Chief Imams, the Bishops, top musicians, our sports personalities. Because, the more of such people are seen taking the vaccines the more the likelihood of resistance will break down in our various localities. So, we discussed that.

He also cited cultural and religious concerns in various parts of the country as major reasons , but stated that “ we are at the state level, we are reviewing that with all of our colleagues.

“But the good thing is, Mr. President has agreed with me that he would convey to the PTF the necessity of using other influencers, maybe the Chief Imams, the Bishops, top musicians, our sports personalities.

“Because, the more of such people are seen taking the vaccines the more the likelihood of resistance will break down in our various localities. So, we discussed that.

Fayemi who said the procurement of vaccines we also discussed, however, expressed the need for Nigeria to look inwards , to develop the vaccines locally, rather than wholly rely on importation.

“ We really need to ramp up manufacturing of vaccines locally. It’s okay that COVAX that Nigeria is part of is going to be delivering some vaccines to us. As we understand, the first 100,000 and then 43 million and ultimately 165 million doses. But, there is nothing as good as having the ability to manufacture our own vaccines locally.

“And we understand that there is a partnership with May & Baker, which is important for the Federal Government to really accelerate, so that we can produce the vaccines here in Nigeria and not be dependent on what is coming from other parts.

“Well, the federal government is already part of the WHO-GAVI Alliance-COVAX partnership and from what we understand from the PTF, vaccines will come from that alliance. Some of it from Pfizer in the first instance and then maybe from other various producers of the vaccines later.

“But there is no clarity as yet as to when these vaccines will arrive Nigeria. So, one of the issues raised with Mr. President is the need to accelerate the delivery of vaccines to the country, so that it will be available to our people.

“ Those of us at the receiving end in the states, know that this is an issue. We also need to ramp up our own preparedness, in terms of getting our states ready for vaccines storage particularly, the freezers and cold chains that will be required for that process. We need to get ourselves ready at the state level.

He also suggested a situation whereby the federal government can procure but, States will be allowed to receive and administer in their various locations “ adding that “ there is a lot of work to be done in that respect.

He also assured that the Governors will Publicly take the vaccines as part of efforts to enhance acceptance at the grassroots.

“Absolutely. We too will like to demonstrate to our citizens that we believe that vaccines would work. Don’t forget, we have a lot of experience on this. Governors forum managed the polio vaccines administration in the country and we have garnered a lot of experience. We have worked with the Primary Healthcare Development Agency, Federal Ministry of Health and will be happy to work with NCDC, PTF, the primary healthcare development agency on this as well. So, we would take a lead as well in our various states.

Fayemi also revealed that details of financial management of are being worked out.
“But we also know that there are a range of approaches to take, the health approach is there. Because, for us at the Governors Forum is not just a health issues, it is also a security issue and it is an economic issue too. We would work in partnership, we are involved with PTF, we have a representation at the PTF and we will work with them generally on them.

Speaking on the issues of security, the Governor, the President has promised clearly that help is on the way, adding that Mr. President is very determined that this year will see a rapid reduction in the free access that bandits, kidnappers, criminals have had in the country.

“I believe there is a whole range of strategies that he is putting in place in order to address that. I have also expressed to him the commitment of governors to step up, both in terms of providing support for our security agencies and also sensitizing our population as well as address the root causes of some of these crimes in our states.
“So, it’s a partnership. He is our commander in chief, we are his field commanders and insecurity is ravaging the land collectively. So we all have do do whatever we can to reduce it and to work in collaboration with the Federal Government”