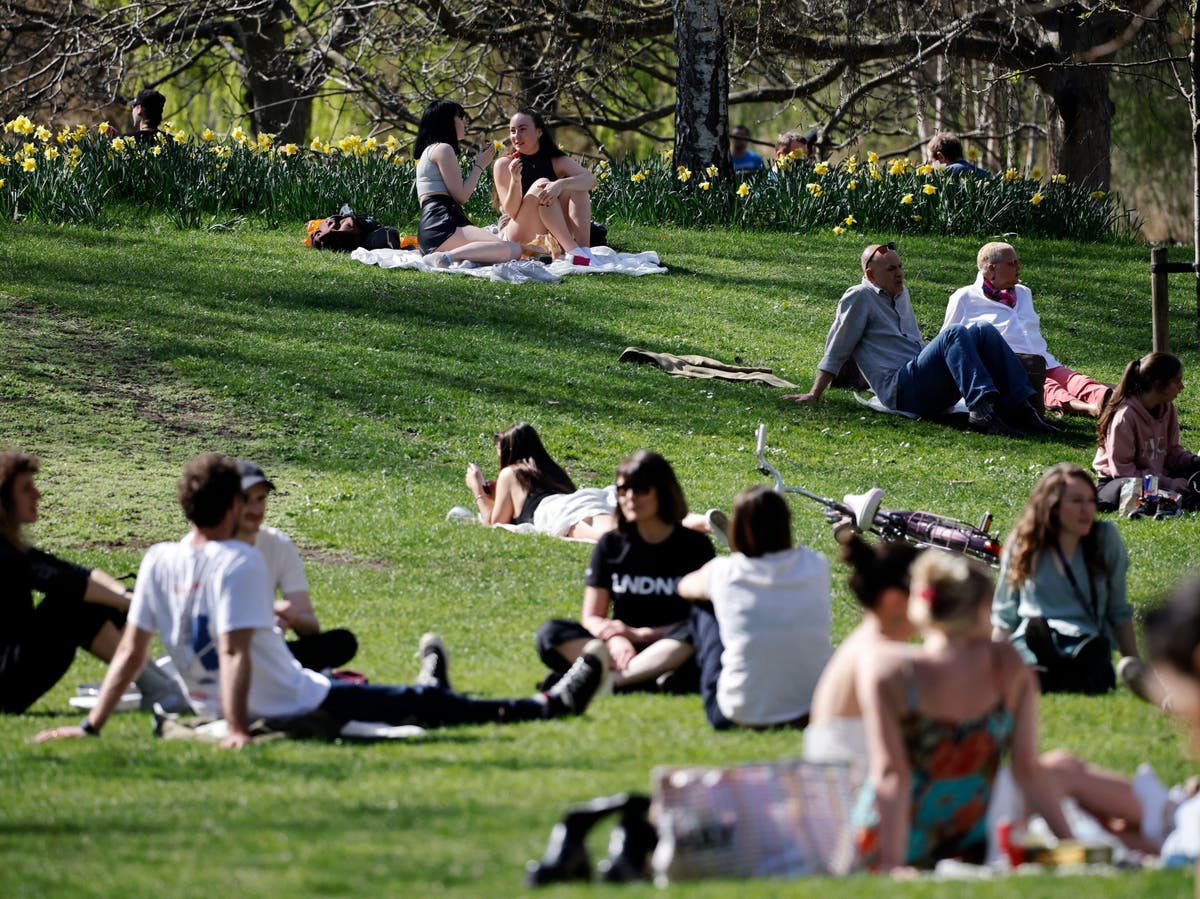 A dispersal order has been put in place, and police have warned they will seize alcohol from people entering parks in Nottingham, after large crowds gathered in the city’s Arboretum as lockdown restrictions were eased.

Local councillor David Mellen said a “selfish minority” had abused the easing of restrictions, adding: “We have all made sacrifices over the last year to keep each other safe.

“Over 600 local people have died due to the virus, we owe it to their families, to each other and to frontline workers not to jeopardise the strides we have made towards reducing the spread of Covid by acting so thoughtlessly and recklessly.”

Nottinghamshire Police Assistant Chief Constable Steve Cooper added that he would like to “remind people that we are still only partly out of lockdown measures”.

Elsewhere, Canada and the German state of Berlin have stopped giving people under the age 55 the AstraZeneca jab, following a small number of rare but serious blood clots after vaccinations. Howard Njoo, Canada’s deputy chief public health officer, told a media briefing: “We are pausing the use of AstraZeneca vaccine to adults under 55 years of age pending further risk benefit analysis.”

Sturgeon: ‘I have spent every waking moment leading Scotland through pandemic’

Nicola Sturgeon has hit out at claims she is prioritising a Scottish independence referendum over the country’s recovery from the coronavirus crisis.

Scotland’s rival political leaders made their pitch to voters in the first TV debate of the Holyrood election campaign on Tuesday night.

During it, Ms Sturgeon said she had not put an independence bill through the parliament but had published a draft.

“I’ll leave other people to judge if my focus has been on the pandemic or not over the past year. People have seen me literally every single day lead the country’s fight against Covid and I have literally spent almost every waking moment doing that,” she said.

“I will continue to do that for every single day that is required out of that crisis, because it is not over yet. I’ve spent today not on the campaign trail, but in the Scottish government headquarters talking over with my clinical advisors, making sure we’re continuing to try to take all of the right decisions.”

The first minister added: “Recovery is not a neutral thing. So long as so many of the decisions lies in the hands of Boris Johnson and Westminster – that often the people of Scotland haven’t voted for, then the danger is we take the wrong decisions and go in the wrong direction just as we’ve been dragged out of the EU against our will.”

Americans more satisfied with vaccine rollout under Biden, including Republicans

Satisfaction with the Covid-19 vaccination process has tripled among US adults since January under Joe Biden’s administration, and has spiked even among Republicans.

According to a Pew Research poll, 49 per cent of Republicans expressed satisfaction with the Covid-19 vaccination process in January. In March, the number rose to 66 per cent.

My colleague Graig Grazios has the full report:

Figures from the Department for Education (DfE) show that an additional 302,397 pupils have qualified for free school meals since March 23 last year – the start of the first national lockdown.

Children are entitled to free school meals if their parent or carer is on benefits, including income support or receiving universal credit with household income of less than £7,400 a year.

The Liberal Democrats are calling for a bailout for small breweries which have suffered as a result of pubs and bars being forced to close during lockdown.

The industry estimates that small brewers have poured six million pints of beer down the drain since last year, while larger brands have benefited from the boost in supermarket sales.

Liberal Democrat leader Sir Ed Davey criticised the Government’s support for small brewers as “bottom of the barrel” as he urged for rent relief and a new support fund dedicated to the sector.

He said: “Small breweries are some of the most cherished independent businesses in our communities. They represent far more than just a pint of beer.

“The Government’s support for these brewers has been bottom of the barrel. In their hour of need, the Government is hitting them with damaging tax rises and ignoring their calls for help to survive more tough months ahead.

“Independent brewers have been completely overlooked: the Tories haven’t provided the tax discounts or grants that other businesses have benefited from during the pandemic. This must be fixed immediately.”

A Chicago hospital’s CEO has been suspended for two weeks following accusations of providing people with Covid-19 jabs, including at an event in which ineligible Trump Tower workers were vaccinated.

The unpaid suspension of Loretto Hospital’s George Miller is on hold until the hospital finds a new CEO, a hospital spokeswoman told the AP news agency.

Dr Anosh Ahmed, who had been Loretto’s COO and CFO, resigned last week, days after he and Mr Miller were reprimanded by its board of directors following reports that hospital executives provided coronavirus vaccines to people who were not eligible to receive them.

There have been at least six alleged incidents in which Loretto Hospital vaccinated people connected to the hospital’s executives, including to employees at downtown Chicago’s Trump Tower — where Dr Ahmed owns a condo — Cook County judges and their spouses, as well as Mr Miller’s suburban church, the Chicago Sun-Times reported.

In a statement, a hospital spokeswoman said Dr Ahmed “requested 10 vaccinations for 10 individuals he identified as eligible under city guidelines, one of whom was terminally ill”.

The statement adds that Dr Ahmed is not a Loretto Hospital employee, but says that on 29 January “the 10 vaccinations were provided to Dr Ahmed and then administered to these individuals”.

“While information provided at the time deemed that these individuals were eligible per city vaccination guidelines, Loretto is no longer approving off-site visits that are not either hosted by the hospital or community partners and organisations,” according to the statement.

Loretto Hospital is located on Chicago’s West Side and largely serves black and Latino people. It was chosen last year to administer Chicago’s ceremonial first Covid-19 vaccination as part of the city’s efforts to encourage residents in West Side neighbourhoods to get vaccinated.

Positive Covid result from rapid test to be confirmed with PCR

The government will begin using standard PCR testing to confirm positive Covid-19 results returned via rapid, on-the-spot tests which are now being used by millions of people every day across the UK.

It comes as part of efforts to quickly detect new and emerging “variants of concern”, some of which are partially capable of evading immunity triggered by infection or vaccination.

WHO criticises China for lack of transparency over Covid ‘raw data’

The head of the WHO has criticised China’s sharing of Covid data while confirming there will be further investigations into finding the origins of SarS-CoV-2, the virus that causes Covid-19.

Tedros Adhanom Ghebreyesus’ comments come as the organisation shared the initial results of its research into the origins of Covid in Wuhan.

Mr Adhanom said the four-week WHO probe was not “extensive enough”, but admitted experts were never under pressure to remove “critical elements” from their report by Chinese officials.

But – on top of health officials saying there was some political pressure from both inside and outside China at the time of the probe – Mr Adhanom criticised China for its lack of transparency over “raw data”.

“In my discussions with the team, they expressed the difficulties they encountered in accessing raw data,” Mr Adhanom said after the report of a team that traveled to Wuhan was released.

“I expect future collaborative studies to include more timely and comprehensive data sharing,” he said.

China has been widely condemned for its lack of transparency during the pandemic, with the nation still claiming it has seen less than 5,000 Covid deaths since the virus’ outbreak.

Miss Hambleton appeared alongside two other men at Birmingham Magistrates’ Court on Tuesday, accused of attending a gathering “of more than two people” in breach of Covid-19 rules.

All three were on the motor rally through Birmingham, on 21 November 2020, to mark the 46th anniversary of the double IRA blasts, which claimed 21 lives, including Ms Hambleton’s older sister, Maxine.

Ms Hambleton told a crowd of supporters outside the court that she disagreed with the move to issue fines due to the fact that more than 46 years after the deadly IRA blasts, there had been “zero justice” for the bereaved families.

Miss Hambleton added, in reference to the Birmingham Six, that men had also been jailed “for a crime they didn’t commit” in that time.

“You tell me, who’s right and who’s wrong?” she asked the cheering crowd.

The Birmingham Six were found guilty in 1975 but their convictions were later quashed by the Court of Appeal after a botched investigation by West Midlands Police led to one of the worst miscarriages in British legal history.

Global health leaders have said “no stone will be left unturned” into the investigation of where SarS-CoV-2, the virus that causes Covid-19, originated.

All hypotheses into the origins of the virus “remain on the table”, the WHO said, while calling for further research into whether or not it could have entered the human population as a result of a laboratory leak.

Researchers previously outlined initial findings after a visit to Wuhan in China.

While China has since faced claims that the Wuhan Institute of Virology could be the suspected source of SarS-CoV-2, the team of experts from WHO and China said in February that the virus was “extremely unlikely” to have entered the human population as a result of a laboratory-related incident.

But as the report was published, Dr Tedros Adhanom Ghebreyesus, director general of the WHO, said: “The team visited several laboratories in Wuhan and considered the possibility that the virus entered the human population as a result of a laboratory incident.

“However, I do not believe that this assessment was extensive enough. Further data and studies will be needed to reach more robust conclusions.

“Although the team has concluded that a laboratory leak is the least likely hypothesis, this requires further investigation, potentially with additional missions involving specialist experts, which I am ready to deploy.

“Let me say clearly that as far as WHO is concerned all hypotheses remain on the table.”

Investigators looked at four hypotheses when examining the possible origins of the virus:

A further 56 people died within 28 days of testing positive for Covid-19 as of Tuesday, bringing the UK total to 126,670, according to the latest government figures.

Separate figures published by the UK’s statistics agencies show there have now been 150,000 deaths registered in the UK where Covid-19 was mentioned on the death certificate.