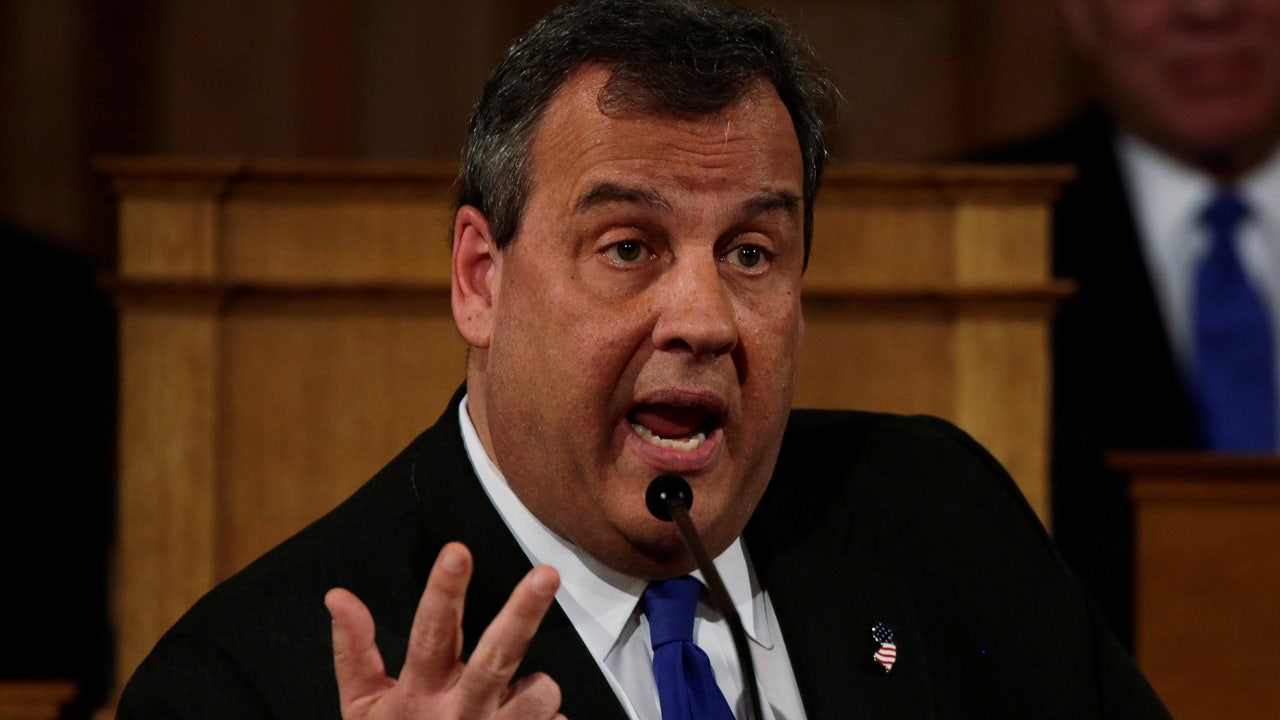 The then-two-term Republican governor of New Jersey had placed many of his chips on a strong performance in the first-in-the-nation presidential primary state. But Christie dropped out of the race after a disappointing and distant sixth place finish in the state’s GOP presidential primary.

ON CORONAVIRUS MASKS, CHRISTIE AND BIDEN SEE EYE TO EYE

Christie quickly backed Donald Trump, who crushed the rest of the field in New Hampshire, launching him towards the Republican presidential nomination and eventually the White House.

Then-Gov. Chris Christie of New Jersey, who was running for the 2016 GOP presidential nomination, campaigns in Manchester, N.H., in April of 2015

Fast forward nearly five years and Christie is not ruling out another White House bid – in 2024.

But unlike many other potential GOP presidential contenders, Christie is not afraid to publicly talk about his national aspirations.

“I haven’t made that decision yet,” he said in an exclusive digital interview Wednesday with Fox News. “I haven’t set any timetable yet.”

“If I have things that I believe are relevant to say that I can uniquely bring to the debate and the discussion in our country and ultimately to the White House, then I’ll run,” Christie explained. “And if I don’t, I won’t. But that’s kind of the way I look at making these decisions.”

Christie highlighted that his 2016 setback wouldn’t be an impediment to any future presidential bid.

“In terms of why would I do better in 2024 than in 2016, 2024 will be different than 2016, just like 2020 was different than 2016,” Christie said. “And you know the person who will do well in that race is the person who can speak to the hopes and the aspirations and the goals of the members of the Republican Party and ultimately the American people.”

The former governor, who gets national TV exposure on the Sunday talk shows as a Republican analyst for ABC News, emphasized that “anybody who thinks that the previous race dictates how a future race will go hasn’t watched politics.”

“I’m still waiting for all the people who in 2012 were saying that Donald Trump was going to be the Republican nominee four years later. Nobody was saying that. Anybody who tries to project that far in advance just has not been paying a lot of attention to American presidential politics,” he noted.

CHRISTIE WON’T RULE OUT RUNNING AGAINST TRUMP IN 2024

Like his longtime friend President Trump, Christie’s known for a brash and assertive in-your-face politics that resonates with working-class voters. While he remains close with Trump and was a vocal supporter, Christie was never part of the president’s administration. In recent months he’s been far from bashful in criticizing the Trump administration’s handling of the coronavirus pandemic and of the president’s repeated claims of a “rigged election” and “massive” voter fraud.

“We’re friends for 20 years. But my view is, if you’re the president of the United States and you’re going to call an election a fraud, you’ve got to come forward with some evidence. And I just have not seen any convincing, compelling, evidence that there was a fraud in this election,” Christie said when asked about Trump’s continued efforts to reverse President-elect Joe Biden’s election victory.

Pointing to Trump’s claims of rampant fraud in major cities in key states like Michigan and Pennsylvania, where the president was narrowly edged by Biden, Christie said, “I just don’t see the evidence of it.”

WOULD A TRUMP 2024 ANNOUNCEMENT FREEZE OUT GOP RIVALS?

Trump has increasingly targeted Republican governors and senators in recent weeks who have refused to help the president overturn the certified election results in their states – or who have recognized Biden’s victory. Trump suggested he’ll back primary challengers to Govs. Brian Kemp of Georgia and Mike DeWine of Ohio, and Sen. John Thune of South Dakota when they are up for reelection in 2022.

Christie said such talk from the president is “not helpful” to the GOP.

“Quite frankly some of the allegations that he’s made against Gov. Kemp and Gov. DeWine and Gov. Ducey in Arizona, just don’t have any basis in fact and that’s the problem with it,” Christie said. “The president’s angry. He’s angry that he lost the election, and he’s angry that people are demanding evidence in order to support his efforts. I don’t think that’s something that should garner anger and certainly shouldn’t garner a primary challenge.”

“I think for the president to be encouraging that now looks a bit more like executing some vengeance because the election didn’t go his way rather than anything Brian Kemp or Doug Ducey or Mike DeWine had done that was in anyway disloyal. In my view they haven’t been,” Christie added.

And Christie – like many other Republican leaders – is concerned that the president’s repeated claims of voter fraud in Georgia and five other states where he narrowly was edged by Biden could backfire in Georgia’s twin Jan. 5 Senate runoff elections, where the GOP’s majority in the chamber is at stake.

Looking ahead to Trump’s election eve rally in Georgia with Sens. Kelly Loeffler and David Perdue, the Republican candidates in the runoffs, Christie said, “I hope when the president goes down there next week that he focuses on Kelly and David and how important it is to protect the Republican legacy, to have a Republican Senate.”

Christie’s been helping raise money for the two GOP incumbents in his role as an honorary co-chair of the Georgia Battleground Fund, which was set up by Republican Party leaders.

“The thing that I can do that can be most helpful and I’ve been continuing to do and was on calls this morning continuing to raise money to get them everything they need for their turnout operation or legal operation and I think that’s the best way for me to be helpful,” he explained. “What I want to do is empower Loeffler and Perdue as much as I can by giving them every resource they need to be able to win.”

A number of potential 2024 GOP presidential contenders have parachuted into Georgia to help campaign with Loeffler and Perdue during the runoff campaign.

“I don’t think any endorsement or appearance will make a difference in this race for these candidates,” he argued.

And in what appeared to be an indirect swipe at some potential future rivals, the former governor emphasized, “I think sending a lot of people down to Georgia doesn’t make a whole lot of sense and sometimes people go down there for the wrong reasons, just for themselves, rather than for the candidates.”