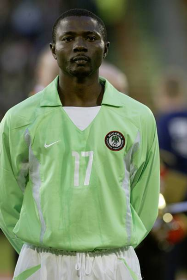 Retired Nigeria international Chikelue Iloenyosi has explained why the Flying Eagles crashed out to Mali in the quarterfinal stage of the 1999 FIFA U20 World Cup despite having home advantage.


The central defender is of the opinion that the Nigeria U20s could have achieved more if some players were more productive.

Iloenyosi singled out ex-Shakhtar Donetsk striker Julius Aghahowa as the most talented of all the players while knocking ex-Ajax Amsterdam speed star Pius Ikedia for mostly playing to the gallery.

“The most talented player in our team is Julius Aghahowa because he was scoring goals, we need the goals,” said Iloenyosi.

“Ikedia was dribbling and turning around, entertaining the whole Nigerians but we were not moving up.

“I’ll tell you that Aghahowa is the best player in the team because he’s the person that wants you to give him the ball, he wants to go and score”.

The Nigeria Football Federation dismissed coach Tunde Disu following a not too impressive start to the tournament and appointed Dutchman Thijs Libregts.

Iloenyosi has insisted that the axing of Disu caused more harm than good and dismissed suggestions that the respected Nigerian coach collected bribe before including players in his team.

“We lost against Mali. From the tournament everything went wrong when they sacked the coach Tunde Disu.

“Honestly speaking let me tell you the simple truth, Tunde Disu didn’t collect any money from any U20 player, we all, merited players that deserve to play for the national team but I don’t know what went wrong.

“They brought a coach who did not know anything about our team mid-way.

“What happened I have to blame the Federation, sacking of Tunde Disu was the cause of our problem because a lot of players had stayed with him and blended with him, he’s like a father.

“We are part of the people that came late to the national team – me, Yobo, Eddy Dombraye, Gbenga Okunowo – but they gave us chance to play,” he concluded.