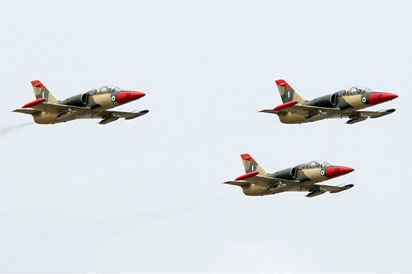 The Chief of Air Staff (CAS), Air  Marshal  Sadique Abubakar,who commended the NAF for the feat  on Wednesday added   that the  NAF 913 aircraft  would further project  NAF’s air power.

“I’m sure that all of us in the Air Force and, indeed, Nigeria are excited that our capacity-building initiatives are gradually yielding the desired results.

“From the outset, we were determined that it was imperative that we develop sufficient local maintenance capacity and capability to enable the NAF to effectively project air power for current and future operations.

“The NAF 913 has subsequently been involved in so many missions both within and outside the country.  They include  the delivery of relief materials to flood victims in Mozambique and Zimbabwe, ” he said.

The CAS, at the acceptance ceremony of the aircraft from the Shaheen Foundation and Pakistan Air Force personnel said that the aircraft would help in prompt deployment of troops.

“The aircraft has successfully moved 70,032 hours since the PDM was completed. Beginning  from today, the NAF 193 will improve the operational efficiency of NAF.

“This will give the required purpose in prompt deployment of troops, with logistics support it requires for operational effectiveness in all its operations,” he said.

He said that the accomplishment was a clear manifestation that the efforts of the force  at enhancing self-reliance was producing the desired results.

He said that the capacity-building initiatives were yielding the desired results, saying that it was imperative to develop sufficient local maintenance capacity to enable NAF project air power.

Abubakar also  said that some of the benefits of in-country PDM was that it would save the country’s foreign exchange, while improving economic resources, capacity and positioning.

He expressed optimism that the 631 Aircraft Maintenance Depot (ACMD) would become a maintenance repair organisation on the continent.

“I am happy to note that some of the benefits of the in-country PDM including saving the nation foreign exchange and significantly improving our economic resources, capacity and competence.”

The CAS noted that it would position the NAF for better service delivery.

“I have no doubt that if we continue, one day the 631 ACMD will become a maintenance repairs organisation.

“That will not only be training NAF aircraft but will  be maintaining  C-130 aircraft  from sister African countries and in the process boost foreign exchange for Nigeria, ” he said.

He also said that there was local reactivation of three alpha jets and one helicopter.

The Air Chief also said that in few months, another C-130 H NAF 918 would be inaugurated.

He said  that the local capacity enhancement programme of NAF  was in line with the Federal Government’s policy of looking inwards.

“NAF will continue to pursue capacity building initiatives through the conduct of local PDM of all aircraft types.

“This  will, undoubtedly, enable the service to  fulfill its primary responsibilities as provided in the constitution.

“The additional defence vehicles will provide the mobility for personnel in the conduct of their duties,” he said.

Abubakar, however, commended  President Muhammadu Buhari, the Senate and House of Representatives’ Committee on Air Force for their supports.

He also commended the Pakistani and Nigeria Air Force engineers and technicians who participated in the PDM.

He also advised the NAF personnel to make the best use of the knowledge acquired.

“I will like to congratulate all the Pakistani Air Force and Nigeria Air Force engineers and technicians who participated in this outstanding project.

“I urge our engineers and technicians to make the best use of the knowledge acquired during the PDM, so that they can effectively apply them in the conduct of future maintenance,” he said.

Air Vice Marshal (AVM) Lawal Alao, the Air Officer Commanding (AOC), Logistics Command, also  commended the CAS for his  support and encouragement to the Command to push  the NAF to greater heights.