In a fall fashion season that has splintered the calendar and sidelined nearly every other big American name, Carolina Herrera is gearing up for a celebration.

Marking the brand’s 40th anniversary, creative director Wes Gordon will be rallying New York with a collection that’s all about love — love for each other, love for self and love for a classic Herrera ball skirt.

Rendered in rainbow colors, harking back to Lena Waithe’s symbolic Pride Flag cape at the 2018 Met Gala, and worn with a heart intarsia sweater, the look is pure Herrera, the Wes Gordon way, as is the updated white shirt worked with heart appliques, embroideries and crystals, over casual shorts on today’s cover.

“People miss New York, whether you come as a tourist with family and friends, or you live here and miss how things were,” Gordon said. “It’s a state of mind that’s not exclusive, it’s nationwide and global in the same way New York Fashion Week is not something that only touches New Yorkers. It’s something the entire country needs to rally around and be proud of.” 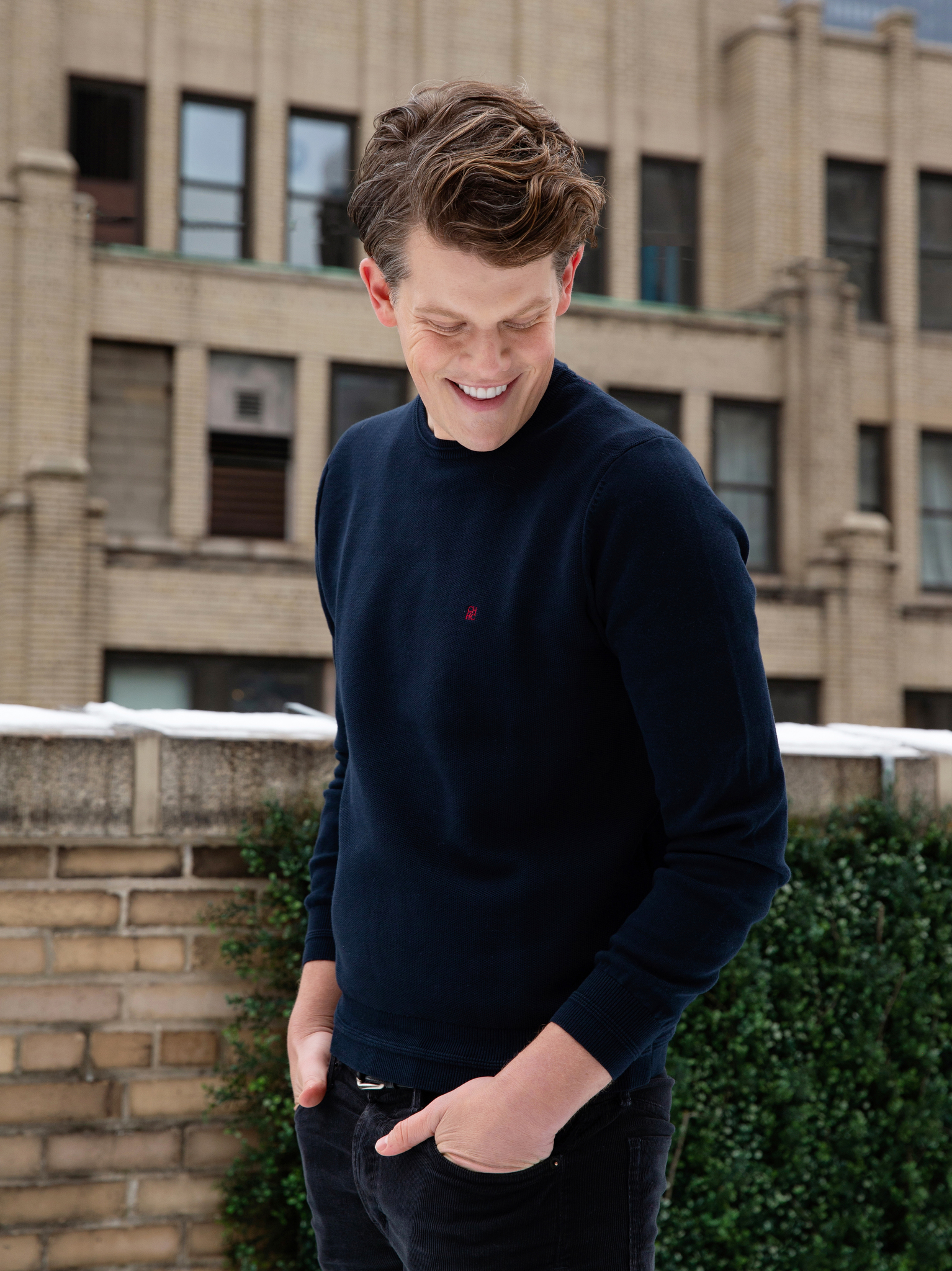 Naturally, the 1977 Big Apple anthem “Native New Yorker” by the band Odyssey will play a prominent role in the March 23 digital look book and film presentation. “There’s this one line I love, ‘No one opens the door for a native New Yorker,’” said Gordon, declining to sing it himself. “We persevere through adversity and come back stronger for it.”

In the weeks following the release of the look book, the brand will take to the streets with a red Carolina Herrera tour bus cruising some of the city’s most iconic sites.

While it’s a far cry from the opulent affair Herrera hosted for her first ready-to-wear show in 1981 — held at the Stanford White-designed Metropolitan Club, where neckties were required and guests included Diana Vreeland, Andy Warhol, Bianca Jagger, Studio 54’s Steve Rubell and a front row full of socialites — the DNA of the brand hasn’t changed even as it has gone digital and global, expanding into accessories, fragrance, eyewear and beauty.

“Live every moment like a celebration, that’s the number-one inspiration I have taken from Mrs. Herrera,” Gordon said of lessons learned from the house matriarch, with whom he brunched monthly at Cipriani during pre-COVID-19 times, and now keeps up with via WhatsApp. 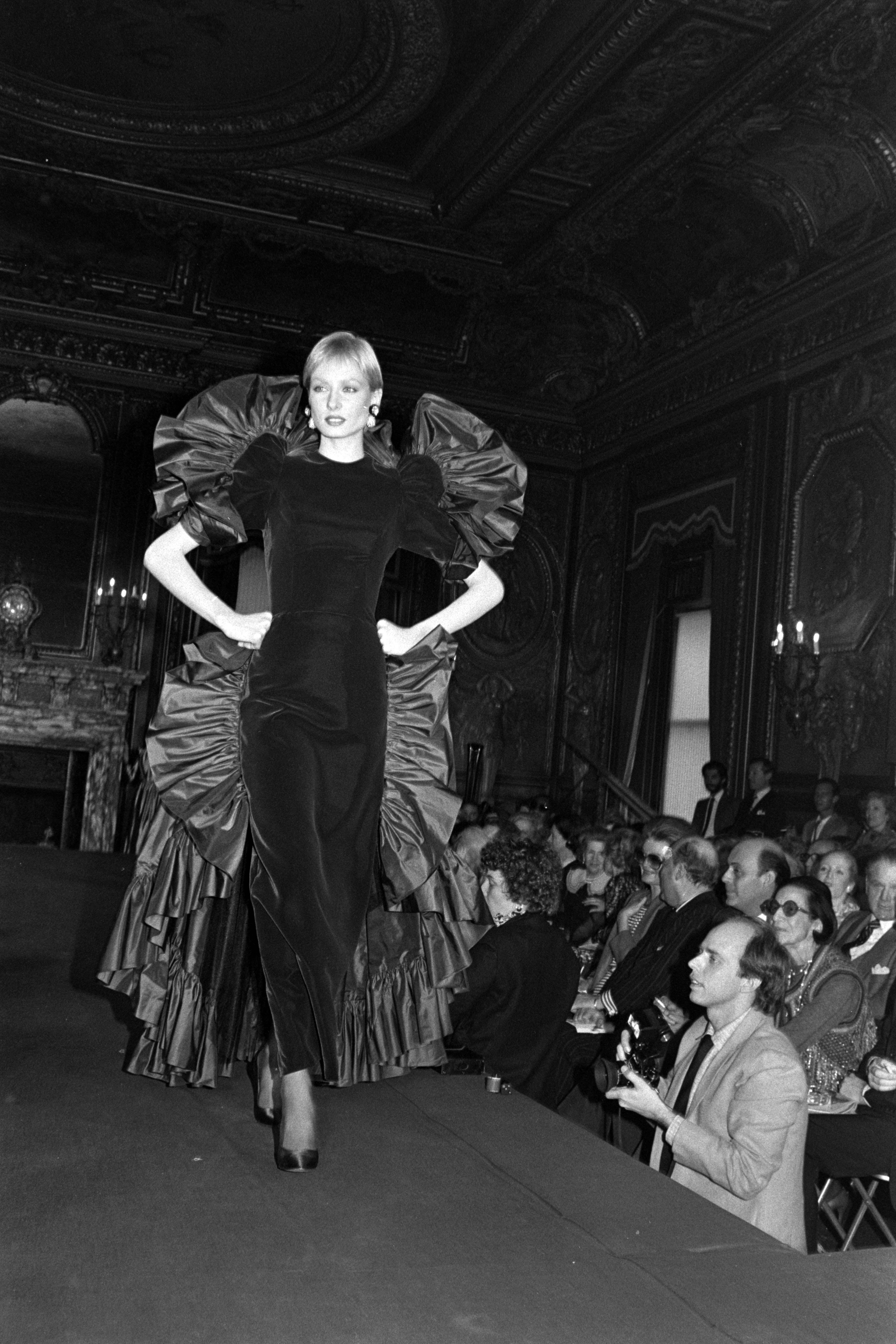 Model Connie Cook in a style from Herrera’s debut collection of ready-to-wear and couture pieces presented at the Metropolitan Club in New York City.
John Bright and Tony Palmieri/WWD

On a lighter note, he continued, she could also offer more pointed advice: “Like many in fashion, I can be a very obsessive person, and during the time we overlapped, she would always bring perspective when we were stressing over a quarter inch on a sleeve or a delayed sample that seemed like the most important thing in the world. She’d look at you with a moment of calm and say, ‘Daaaarling, it’s just a dress,’” he laughed. “That wisdom is something we all need.”

Although he may be sitting atop the Puig-owned brand now, Gordon understands the trials of being an independent designer, having helmed his own line in New York for seven years. “It’s a struggle to run a small fashion brand and you wear a lot of hats. I had a live/work space and a small team, so the idea of being creative director of Carolina Herrera is still something surreal. This collection will mark my third-year anniversary and it is no less exciting every day when I come to the office; if anything it’s more so.”

About that office: since Gordon and his team returned to work in the Garment District in June (with COVID-19 precautions), he realized how much he missed it. “To hear the hum of the machines and watch these incredible men and women draping on forms and collaborate with them…it made me realize how much I love and value the people I work with,” Gordon said. “So many industries you can go on working remotely indefinitely. Fashion is not one of them. It’s about collaboration, conversation, tactility, watching how a dress moves on a model. I will never underestimate the magic of that again.”

He also understands his position of privilege. 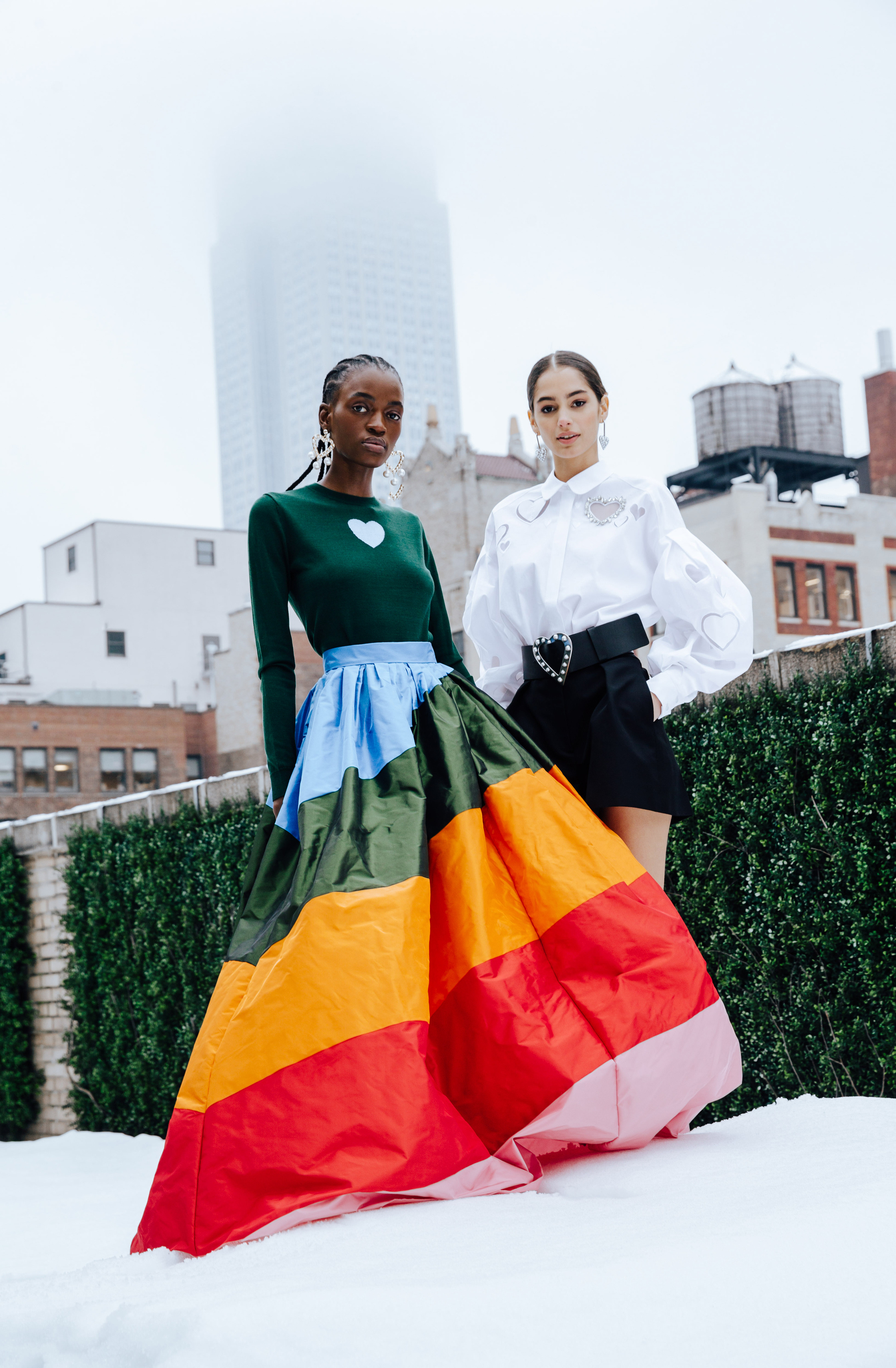 “This past year has been hell. People are sick, people have died, people have lost their jobs, families have been torn apart — that fashion is still going at all is spectacular. Any house or brand, big or small, independent or part of a group, three employees or 300, the fact they continue against all the odds deserves a tremendous amount of applause.”

Herrera is showing on Runway360.com as part of the CFDA’s newly named “American Collections” calendar, which Gordon also applauds.

“What Steven Kolb and Tom Ford did changing the calendar was a very necessary thing,” he said. “It takes some agility on everyone’s part, whether it’s a retailer or the media, to be able to simultaneously talk about pre-fall, fall, New York, Europe, couture, it’s a lot of juggling. But what matters is that people are doing and making and showing. And we need to be as accepting and accommodating and generous about that as possible, because it’s very tough.”

While his presentation will lag a little behind, Gordon still believes in the rhythm of the fashion calendar. “It lends some normalcy to a crazy world,” he said. “But above all, this season I feel grateful I’m able to have the opportunity to tell a beautiful story and express myself creatively. I’m not taking that for granted because there are a lot of brilliant creative people who will be unable to do that this season.”

Business-wise, over the past few months Gordon has seen bright spots in the brand’s bridal category, and in the more versatile separates he pushed in the pre-fall collection. “In New York, we are a week away from indoor dining at reduced capacity and indoor gatherings of a certain size being permitted,” he said, willing brighter, dress-up days ahead. “The progress we’ve seen with the vaccine and the resolution and closure to some of the political tensions feels optimistic.”

He had a small part in that, of course, dressing Vice President Kamala Harris in a suffragette white suit for the historic victory speech she delivered Nov. 7 at a Delaware drive-in rally.

“There’s a symbol right there of hope and optimism,” said Gordon. “These important moments are still happening, women are walking across so many important stages whether it’s that one, or more symbolically, and we want to make sure we’re there to make them feel as special on the outside as they are on the inside.” 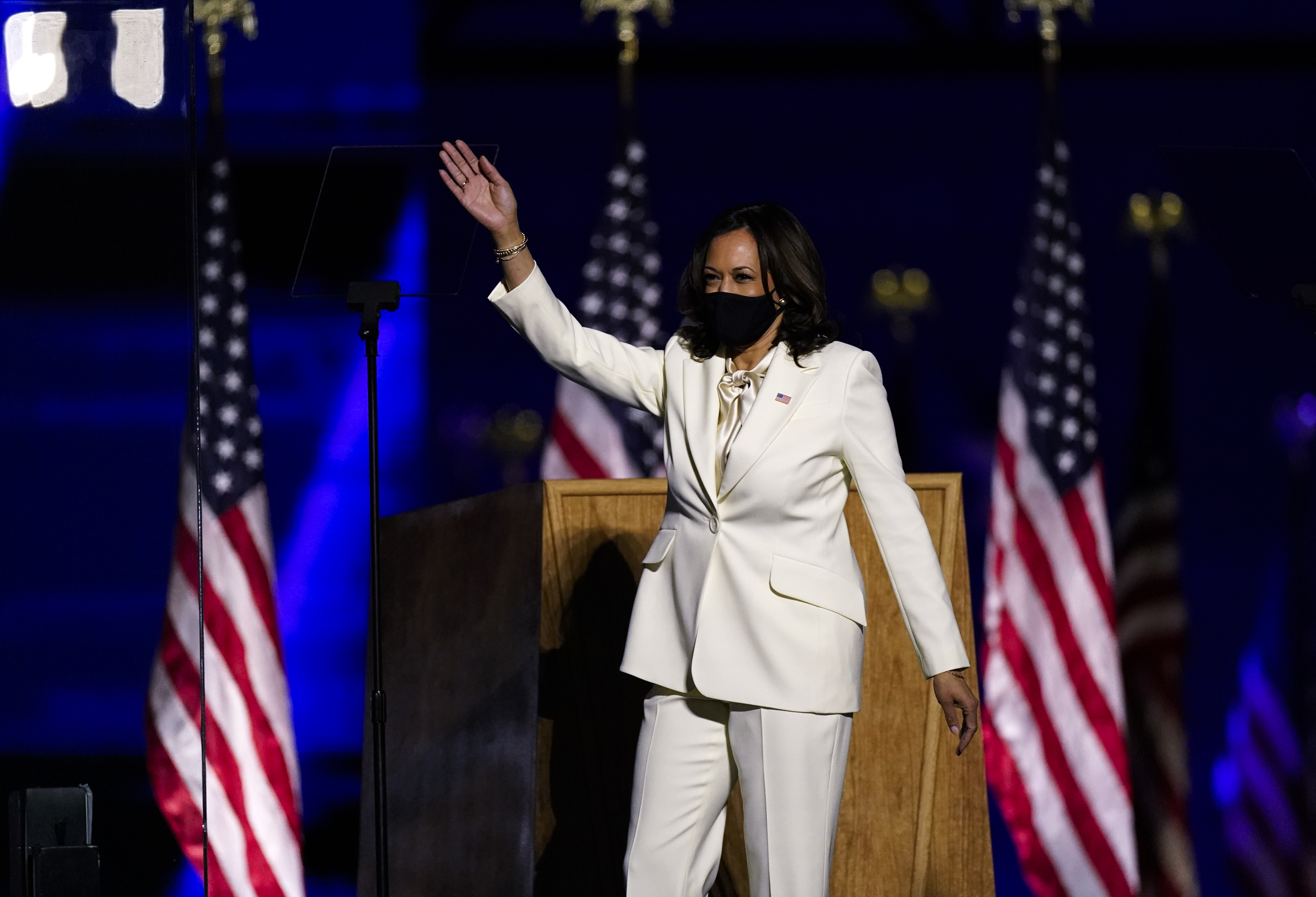