Imagine leading one of the fastest-growing brands within a powerhouse portfolio of more than 70, and all that momentum vanishing within an instant.

That’s essentially what happened to 28-year-old Alexandre Arnault, chief executive of German-engineered luggage label Rimowa, in which the French group run by his father took a €640 million majority stake in 2016. By 2019, after a few years of reorganisation, the brand had succeeded in turning its suitcases into fashionable status symbols, collaborating with the likes of Virgil Abloh and Supreme, and was growing rapidly — on track to hit its long-term target of close-to €1 billion in sales by the middle of the decade.

Then the pandemic hit, sinking the travel sector. International tourist arrivals plunged 63 percent during the first half of 2020, according to the United Nations World Tourism Organisation (UNWTO). International tourism remains largely on pause, as a new wave of lockdowns and quarantine requirements sweeps much of the world. Even with a vaccine on the way, the organisation expects it’ll take two-and-a-half to four years for travel to return to 2019 levels.

It’s no surprise, then, that Rimowa’s sales are down almost 50 percent in 2020. The brand did not benefit much from the surprise rebound in luxury spending over the summer, which propelled LVMH stablemates Louis Vuitton and Dior back to growth sooner than many analysts had expected.

“[Covid] doesn’t make it super easy to sell the product,” Arnault said. “It’s not a secret that things have not been going well at all.”

There have, however, been bright spots that have allowed Rimowa to perform better than some competitors during this period. (Samsonite, for instance, saw sales decrease by about 54 percent in the first half of 2020.)

Because Rimowa is vertically integrated, the company was able to wind down production and pick it back up when needed. That, plus a well-timed exit from some less-than-favourable wholesale partnerships, saved the brand from having to run end-of-season sales to move unsold suitcases. Luggage is also selling briskly online and should level off at 20 percent to 25 percent of overall sales in 2021.

And what has been selling well, Arnault said, is newness and novelty, like the brand’s collaboration with Moncler via its “Genius” marketing program.

But for Arnault, the company’s long-standing plans to scale Rimowa by moving the hard-shell stalwart’s lineup beyond travel essentials — from traditional luggage to products that aid in overall mobility — are being rolled out just in time. 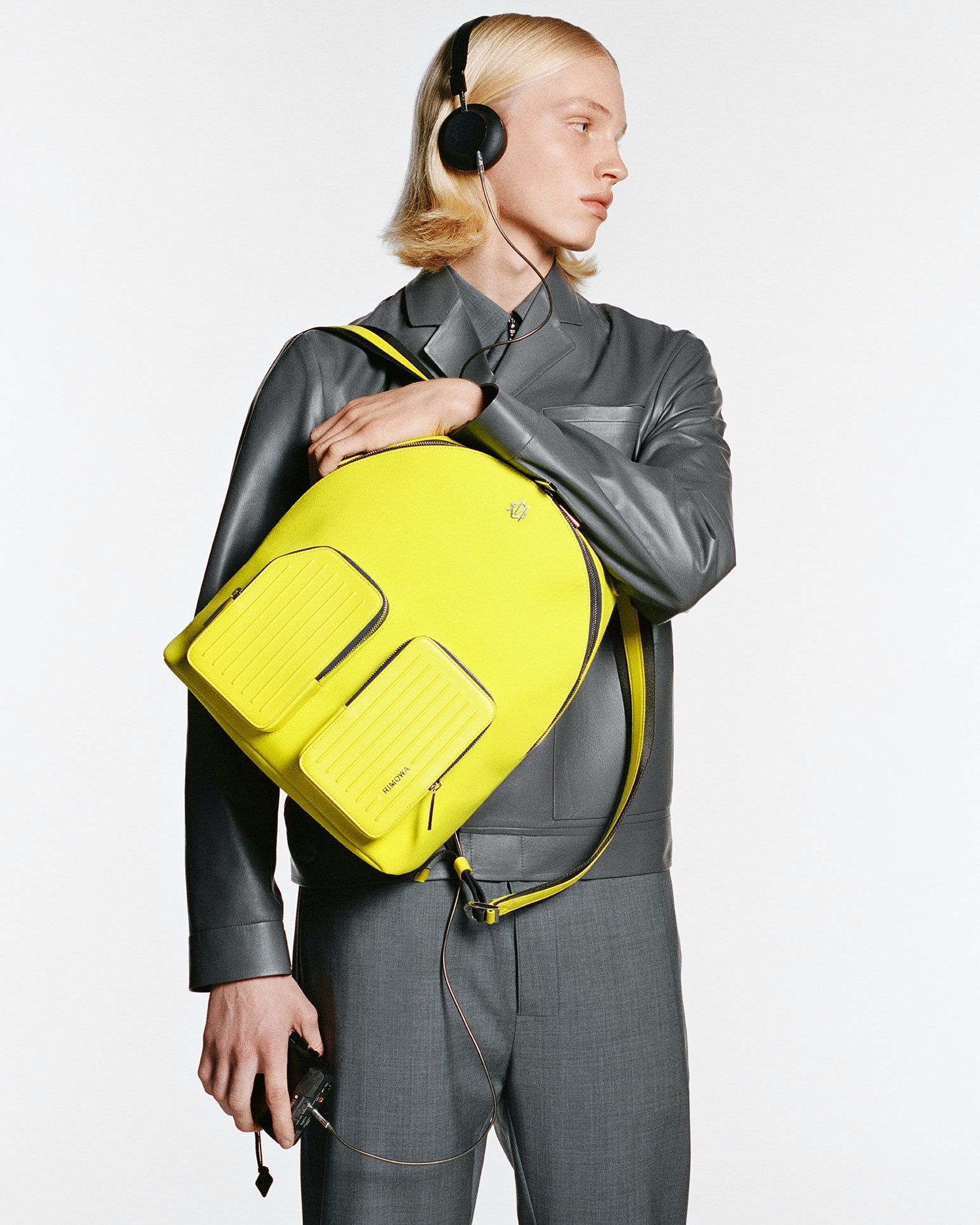 This week, Rimowa launches its first range of soft bags dubbed “Never Still,” a roundup of unisex backpacks, weekend bags and totes made in Italy from waterproof canvas and full-grain leather. Starting at €600 for a small backpack and climbing to €1,200 for a weekender bag, the line — set to arrive in stores mid-January 2021 — is Rimowa’s first full-blown attempt at everyday essentials. It had previously waded into the market with its “Personal” case, first launched in collaboration with Dior’s Kim Jones in 2019, and more broadly with the launch of sunglasses earlier this year. There are also iPhone covers and recently rolled-out packing cubes, all to help make Rimowa “part of the clients’ lives in a broader way,” Arnault said.

“We want to make sure we can be with the client everywhere,” he said.

The soft bag range inches Rimowa further into the hyper-competitive market for luxury handbags, which LVMH dominates and hit €57 billion in 2019, according to Bain & Company. The group’s expertise allowed Rimowa to access the best factories, source the best materials and hire top talent to develop the designs.

But is the brand strong enough to stand out in a market where uncertain consumers are favouring names they know and trust — like Louis Vuitton, Chanel and Hermès? And how will Rimowa translate its sharp, no-nonsense brand image into soft goods?

Arnault wanted the bags to be function-first. Despite lacking the hard shell Rimowa’s rolling luggage is best known for, each piece has structure and incorporates identifiable markers of the brand’s signature luggage designs, like mimicking the grooves on the front of a Rimowa hard shell. The collection is genderless, and the colour story — black, with fashion colours like soft moss and dusty rose mixed in for good measure — is in line with its effort to attract a wider range of customers, including younger women and men.

“We purposefully chose not to make full-on leather backpacks,” he said. “Rimowa has a slick, German look that’s industrial in a way … we picked materials that have the sturdiness and rigidness of Rimowa, but are softer and more wearable in everyday life.”

With the big move into softer goods, is a play in apparel — another expertise of the group — on the horizon?

Louis Vuitton, the French trunk maker that became LVMH’s crown jewel, launched ready-to-wear under the supervision of Marc Jacobs in 1997, bringing a highly marketable fashion sheen to the once dusty brand, about a decade after Bernard Arnault acquired LVMH and several decades years after the introduction of its first handbag. While the speed of innovation is certainly faster these days, Arnault said it’s not where his mind is at.

“I’m not going to say never,” he said, “But clothes are not coming any time soon … we only have one shot at our first shot.”

Plus, that old playbook may not even work with the modern consumer. Rimowa has taken cues from other LVMH brands by launching a series of high-visibility collaborations — with everyone from Supreme to Abloh to Kim Jones — which make up a single-digit percentage of sales but have an outsize marketing impact. The company has also introduced smaller accessories, like iPhone cases, at a more accessible price point to appeal to younger customers. In this era, however, the runway dream may be less relevant for a consumer more interested in newness than star designers.

“It only makes sense to represent more than just hard cases and Rimowa will be able to make that transition,” said Robert Burke, a retail advisor. “They could certainly enter product categories like sweaters, accessories and jackets with a great deal of credibility. I’m not sure if we’ll see a full-blown runway show, but a focused [lineup] that relates back to travel and lifestyle makes a lot of sense.”

For now, Arnault believes that tourism, still the core driver of Rimowa sales, will bounce back — and hitting that €1 billion sales goal is possible. While business travel has been changed forever, consumers — especially young ones — still have wanderlust, and will be scheming to get back on a plane in the near future.

“Fast forward six, nine months and people will still be excited to go to places,” he said. “I, myself, am super excited.”

What Luxury Can Do About the Tourism Crisis

Rimowa Turned Luggage Into a Status Symbol. Can It Sell Fashion?