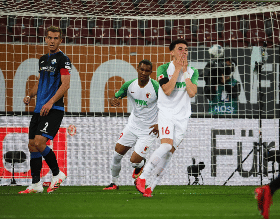 Sport
May 29, 2020May 29, 2020 Stan 0 Comments
TweetPinPrintLinkedInEmailFacebook Allnigeriasoccer.com‘s round-up of Nigerian players that were in action for their respective clubs in the German Bundesliga on matchday 28.

Nigerian players with dual nationalities and have played competitively for the senior national teams of other countries have been omitted.

Then on Wednesday evening, RB Leipzig and Hertha Berlin shared spoils 2-2 at the Red Bull Arena, courtesy of goals from Lukas Klostermann and Patrik Schick for the hosts while Marko Grujic and Krzysztof Piatek replied for the visitors.

Jordan Torunarigha who was booked in the 57th minute started and went the distance for the Old Lady while Ademola Lookman came on for Dani Olmo a minute later in the encounter.

Over to PreZero Arena and it was Hoffenheim who ran out 3-1 winners over FC Cologne.

Christoph Baumgartner struck a double while Stephen Zuber equally weighed in with an effort for the hosts. Florian Kainz effort proved scant consolation for Köln.

Köln’s Kingsley Ehizibue was hauled off for Jorge Meré after just 32 minutes of game time. Former Germany U20 skipper Kevin Akpoguma was in the home team’s matchday squad.

Elsewhere at the WWK Arena, defenders Jamilu Collins and Felix Uduokhai helped their respective teams to keep a clean sheet as Augsburg and Paderborn shared spoils in a goalless stalemate.

And finally at the Stadion An der Alten Försterei, Union Berlin and FSV Mainz settled for a 1-1 draw, with Marcus Ingvartsen cancelling out Ridle Baku’s opener.

While Mainz’s Taiwo Awoniyi started and lasted until the 63rd minute when he was replaced Karim Onisiwo, Anthony Ujah watched proceedings from the bench for the entirety of the game for the hosts.

What are the best bookmakers for Nigeria residents?

The Need for Athletic Performance Enhancing Gadgets, Tools and Clothes 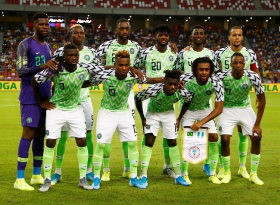 What Could Super Eagles Starting Lineup Look Like Against Algeria?:: All Nigeria Soccer