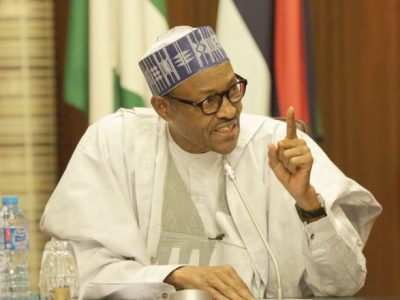 The President Muhammadu Buhari-led federal government of Nigeria has told Ghana it will no longer tolerate the unfair treatment of its citizens in their country.

This position was made public in a personally signed statement on Friday by Nigeria’s Minister of Information and Culture, Alhaji Lai Mohammed.

The statement condemned the way Nigerians are been treated in Ghana and told Ghanian authorities that such will no longer be tolerated.

“The Nigerian Government is deeply concerned by the incessant harassment of its citizens in Ghana and the progressive acts of hostility towards the country by Ghanaian authorities, and will no longer tolerate such.

In this regard, the Federal Government is urgently considering a number of options aimed at ameliorating the situation,” the statement noted.

Naija News recalls the shops of many Nigerian traders in Ghana were recently locked up with the Ghanian authorities claiming they were locked by the government as they demanded pieces of evidence of their Ghana Investment Promotion Council (GIPC) registration which they were unable to provide.

The requirement for GIPC registration is $1 million minimum foreign equity, while the registration fee is 31,500 cedis.

The Spokesman of the Ministry of Trade and Industry, Boakye Boateng, told a Ghanaian publication, Starr News in an interview that the traders have been served notice for over a year now and were pardoned in December by President Nana Akufo Addo but still unable to provide the needed documentation.

The Nigerian government in a fresh reaction on Friday has now declared it will no longer tolerate the harassment of its citizens in Ghana.

It listed some of the unfriendly actions already taken by the Ghanian government against Nigeria and its citizens, warning that such would no longer be swept under the carpet.

The statement noted that “The Federal Government has been documenting the acts of hostility towards Nigeria and Nigerians by the Ghanaian authorities. These include:

– Seizure of the Nigerian Mission’s property located at No. 10, Barnes Road, Accra, which the Nigerian Government has used as diplomatic premises for almost 50 years. This action is a serious breach of the Vienna Convention.

– Demolition of the Nigerian Mission’s property located at No. 19/21 Julius Nyerere Street, East Ridge, Accra, another serious breach of the Vienna Convention.

– Aggressive and incessant deportation of Nigerians from Ghana. Between Jan. 2018 and Feb. 2019, 825 Nigerians were deported from Ghana.

– Residency Permit requirements, for which the Ghana Immigration Service has placed huge fees, far higher than the fees charged by the Nigerian Immigration Service. These include the compulsory Non-citizen ID card (US$120, and US$60 for yearly renewal); Medical examinations, including for Covid-19 which is newly-introduced (about
US$120), and payment for residency permit (US$400 compared to the N7,000 being paid by Ghanaians for residency card in Nigeria).

– Outrageous stipulations in the Ghana Investment Promotion Centre Act. When the Act was initially promulgated in 1994, a foreigner is required to invest at least US$300,000 by way of equity capital and also employ 10 Ghanaians. This Act has now been amended twice, with the 2018 GIPC Act raising the minimum capital base for foreign-owned businesses to US$1m. Though targeted at foreigners, it seems GIPC’s definition of foreigners is Nigerians. The GIPC Act also negates the ECOWAS Protocol.

– Harsh and openly-biased judicial trial and pronouncement of indiscriminately-long jail terms for convicted Nigerians. There are currently over 200 Nigerians in the Nsawam Maximum prison in Ghana alone.”

The Federal Government says Ghana has not reciprocated its kind and accommodating attitude, but still urged Nigerians to continue to respect the rule of law wherever they find themselves.

“The Federal Government will like to put on record the fact that even though over 1 million Ghanaians are resident in Nigeria, they are not being subjected to the kind of hostility being meted out to Nigerians in Ghana.”

“Also, Even though the main reason given for the seizure of Federal Government property at No. 10, Barnes Road in Accra is the non-renewal of lease after expiration, the Ghanaian authorities did not give Nigeria the right of first refusal or the notice to renew the lease.”

“By contrast, the lease on some of the properties occupied by the Ghanaian Mission in Nigeria has long expired, yet such properties have not been seized.”

“Nigeria has time after time demonstrated its fidelity to the long cordial relations with Ghana. But indications, especially in recent times, are that Nigeria’s stance is now being taken for granted and its citizens being made targets of harassment and objects of ridicule.”

“This will no longer be tolerated under any guise.”

“In the meantime, the Federal Government wishes to appeal to its citizens resident in Ghana to remain law abiding and avoid engaging in self help, despite their ordeal.”