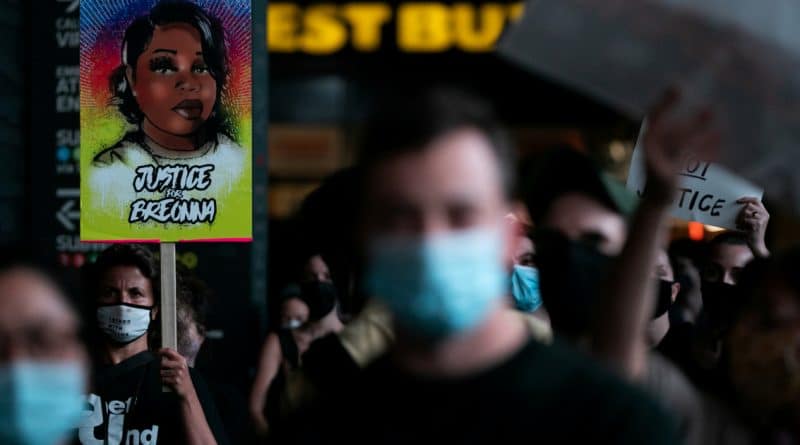 Washington, DC – Hundreds of demonstrators chanting Breonna Taylor’s name marched through the streets of Washington, DC late on Wednesday, after a grand jury in Kentucky decided not to charge police officers for her death – igniting fresh anger over police brutality in the United States.

Protesters dressed in all black carried placards showing the name of Taylor, a Black emergency medical technician who was shot six times and killed in March after three police officers forced their way into her home with a search warrant in a drug trafficking investigation.

“The Breonna Taylor case was a smack in the face to so many people,” said Michael, a 19-year-old protester from Washington, DC who requested that only his first name be used.

“Black people, brown people, we’re all tired of the injustice and the disrespect that we’re seeing,” he told Al Jazeera.

Similar protests erupted in New York, Philadelphia, Las Vegas, Atlanta, Portland and Chicago after a grand jury in Taylor’s hometown Louisville, Kentucky decided on Wednesday none of the police officers involved in the raid on her apartment would be charged for causing her death.

Former officer Brett Hankison was indicted on three counts of “wanton endangerment” for shooting into a neighbouring home during the raid.

“It feels like that the walls of Breonna Taylor’s neighbours got more justice than her,” said Daniella, a 16-year old high school student from Arlington, Virginia who did not want to provide her last name. “It’s just unbelievable.”

Along with George Floyd, a Black man who died in police custody in Minneapolis in late May, Taylor’s case became a rallying cry that spurred months of nationwide protests denouncing systemic racism and demanding police reform.

At the height of the protests in June, major cities across all 50 US states saw thousands of people marching, chanting and holding so-called “die-ins”, fostering a national debate on policing, and forcing the nation to reckon with its history of racial injustice.

Demonstrators have continued to take to the streets on a nightly basis in some cities including Portland, Oregon, Louisville, Kentucky and Washington, DC, but the sizes of the crowds have since shrunk.

“We’ve been out here over one hundred days,” Sean Babalola, a DC-based protest organiser said at the start of Wednesday’s rally.

“People get tired, they get fatigued,” Babalola said. “That same energy that we first had might not be there, but we know that people can get right back up.”

Despite the smaller numbers, Danielle Belton, editor in chief of The Root, a digital magazine that focuses on Black issues, said the movement remains strong and will continue to affect the national discussion.

“I’ve been impressed with how sustained the protests have been,” Belton said. “In my lifetime maybe protests last a few days, or a couple of weeks, but the fact that this has been going on since the spring is pretty impressive.”

She points to competing priorities for Black Americans, such as the coronavirus disease which has killed more than 200,000 people in the US and disproportionately affected Black and brown communities, as well as other political battles.

Protesters have called for a fundamental change in the way communities are policed, by shifting police funds into programmes that support Black communities, and ending what they say is the excessive militarisation of the police.

Taylor’s case was also highlighted by celebrities and athletes, including Oprah Winfrey and tennis star Naomi Osaka, who have demanded police officers involved in her shooting be charged.

But Wednesday’s grand jury decision left many disappointed with the justice system, and unsure if transformational change would happen any time soon.

“I want to think that these protests make a difference, but it seems that they are just bringing awareness more than anything,” said Meka Jones, 26, a data analyst from Baltimore who has been taking part of the protests all summer.

“I don’t think that it is making a difference in police reform, but I think the longer we do it, something has to change.”

But Cameron said the officers who showed up to her house with a “no-knock warrant” acted in self-defence after Taylor’s boyfriend, Kenneth Walker, fired at them. No drugs were found in her apartment. The city has since banned such warrants.

On September 15, the city of Louisville agreed to pay $12m to Taylor’s family in a wrongful-death lawsuit settlement.

The move was accompanied by reforms of the Louisville Metro Police Department, including a requirement that commanders approve search warrants before they are put to a judge.

With people already casting ballots in early voting for the presidential election, contenders weighed in on the latest developments.

In a Tweet, President Donald Trump, who is running for re-election on a law and order platform, did not mention Taylor by name and instead offered his unequivocal support to law enforcement.

“We do not need to wait for the final judgement of that investigation to do more to deliver justice for Breonna,” Biden said in a statement, adding that the country should start by addressing excessive force, banning chokeholds and overhauling no-knock warrants.

“We must never stop speaking Breonna’s name as we work to reform our justice system, including overhauling no-knock warrants,” Harris said on Twitter.

Tonight, I’m thinking of Breonna Taylor’s family who is still grieving the loss of a daughter and sister.

We must never stop speaking Breonna’s name as we work to reform our justice system, including overhauling no-knock warrants.

Experts say regardless of who wins the November election, authorities will have to address racial inequality in the US, otherwise, protests and violence could flare up if the same pattern of unwarranted police violence against Black people repeats itself.

“If we don’t get the racial question settled, by having a national dialogue about genuine racial inequity, and having a discussion about reparations, followed up with legislation, these are issues that are not going to go away,” said Ravi Perry, professor and chair of the Department of Political Science at Howard University, an historically Black university.

“Racial issues in this country are not Black problems, they’re American problems. And we’re going to have to solve them together as Americans,” Perry said.

In Louisville on Wednesday, demonstrations, which began peacefully, turned violent and two police officers were wounded. A nighttime curfew in the city will remain in effect until Saturday morning. More than 100 protesters were arrested.

In Washington, DC, protesters chanting “justice for Breonna Taylor” marched from outside the Department of Justice towards the White House and Black Lives Matter Plaza. The protest lasted into the night as police in riot gear blocked streets.

“I’m not going to stop coming until I see change. When change does come and I believe it will come, I want to be a part of that,” said 26-year-old Deon, a protester from Detroit, Michigan who requested only his first name be used.

“I don’t want to have been sitting on the sidelines.”