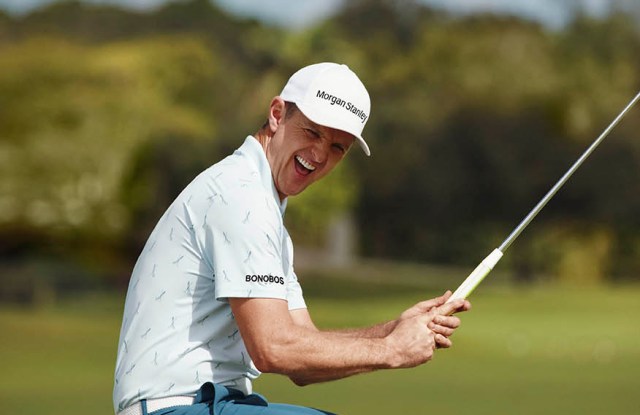 
Finding the right brand ambassador can sometimes be a tricky proposition. But for Bonobos, linking with U.K. golfer Justin Rose has been exactly what the company had hoped it would be: a sales driver.

Rose jumped ship in early 2019, leaving Adidas, his longtime apparel sponsor, to join Bonobos, which was hoping to expand its reach in the golf world.

Micky Onvural, Bonobos’ chief executive officer, said the company’s golf sales last year increased 15 percent, with a 50 percent uptick in the second half. And golf penetration doubled from 2019 to 2020.

“In the first quarter, with lockdown, no one was buying anything,” she said. “Then golf emerged and people were excited to play. It’s very exciting to see golf grow holistically and we’re expecting the momentum to continue.”

That momentum will be accelerated, the company hopes, by the launch of the JR Capsule Collection, Bonobos’ first signature golf collection for Rose, which will be available beginning today.

The spring collection co-designed with the golfer features seven polos, two pants and two shorts that are intended to be worn both on and off the course.

“This is something new and exciting and I’m enjoying the collaborative nature of it,” Rose said in a Zoom interview from his home in the Bahamas. “We’re all dipping our toe in the water, but if it all goes well, it’ll be fun to get more involved in the future.”

He said that although it’s only been a little over two years, it “feels like forever” since he joined the Bonobos team. “I’m incredibly comfortable I’ve been able to build the relationship with the team and start this new collaboration. It’s exciting they’re willing to step out and align their brand alongside mine.”

Although he doesn’t fancy himself a designer, Rose did provide plenty of input. “My role is to put forth little ideas and details I think work well on the golf course, out on tour, what’s comfortable — and also create positive momentum with the brand going forward,” he said. Rose said he’s “particular” about how the collar sits as well as the cut and length of the arm and how the shirt falls on the body. “Those are my bits of feedback. I’d say right now I’m more of a technical adviser and I’ll leave the fashion and print design to the team that is skilled at it.”

But he is partial to the designs, especially “anything with a rose logo.”

“We did the first rendition a couple of years ago and one of my favorite shirts last year was a black-and-white one that had a big rose print on it — it looked really cool. We’ve kind of gone back to a smaller print — from afar it looks like a bunch of tulips and you’ve got to really get up close to see the detailing. My favorite shirt at the moment is a white shirt, which is inherently pretty standard, but with this bold and cool mini rose print all over it and the roses are bright red, very traditional. That’ll be my Sunday look at The Masters this year. That could hopefully be an important round of golf for me and it’s important to slip on a shirt that you feel connected with and inspired to play your best golf.” 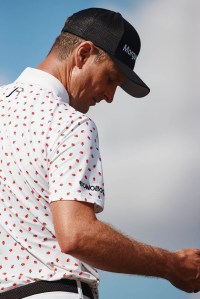 Justin Rose expects to wear this mini rose print on Sunday at The Masters.
Bjorn Iooss

Rose, who describes his style as “a classic, modern vibe,” sticks to “sharp-looking, crisp patterns and cuts — I think the cut is really important — I don’t want to feel like I’m swimming in my clothes. I want them to be more form-fitting.” He tends toward traditional colors such as navy or white, “but being a couple of years in with Bonobos, I’ve found a different vibe and what I’m more comfortable in. I’ve started to push my own boundaries a little bit and you discover where your comfort zone is and where you can push it. For me, that’s been a fun journey.”

Looking ahead, he hopes to expand his signature collection into accessories. “For me, the devil’s in the details: how you tie an outfit together with the accessories is really important and maybe those are avenues we can explore in the future,” he said.

Rose, who turned pro in 1998, has seen the game of golf change as well over the course of his career with the top players now paying a lot more attention to their fitness. “I’ve touched 40 now so there’s pressure for me to keep it going,” he said. “Golf has definitely transitioned to being a more athletic sport. The best players have always taken that somewhat seriously, but I think the competition now on the tour is so deep and guys are working incredibly hard to bring their best in every way they can and fitness has been a real driver. And this huge drive for distance on the tour really only comes with strength and speed and guys are training very hard in the gym.”

There’s also the mental aspect of the game, where looking good is important. “A big part of playing your best golf is bringing your personality onto the golf course and being able to express yourself. For me, how I feel on the golf course is important and the conscious decision of what I wear on a certain round is part of my morning routine. Am I going to feel comfortable in this, how’s it going to look on TV, how am I going to feel playing in front of thousands of people wearing this? I feel Bonobos offers me so many options and helps me fit my mood that day.” 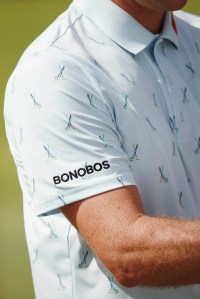 Interestingly, Rose has experienced a myriad of emotions on the course since play resumed last spring after the initial pandemic lockdown. At first, he admitted, he enjoyed the fan-free experience, but that changed.

“For the first two or three weeks, I enjoyed the novelty of it, the fact that it was quiet, you could go about your business without distraction, you felt like you had the run of the golf course, you could walk in any direction without fans stopping you for autographs and I kind of felt like I had a lot more energy,” he said. “Then a month or two into it, I started to realize how flat I felt and how much we rely on the crowd, especially when your game is not great. The first couple of weeks, I actually played pretty well and got myself in contention so you have that inner motivation to keep you going. But when I’ve been lagging in the middle of the pack, I’ve really struggled to get that intensity and focus. Sometimes when you’re playing in front of a crowd, just the inherent nature of that focuses your mind.”

For Rose, he’ll be playing three consecutive weeks in Florida, including The Players, in the run-up to The Masters in Augusta, Ga., in early April. “I’m trying to find that perfect flow into Augusta and sharpen my game up. Obviously, I would love to win before The Masters, but my ultimate goal is to try and get the game firing for April,” he said.

And he’ll be wearing Bonobos.

Onvural said Bonobos, which is owned by Walmart, re-branded its golf line around four years ago when it saw “an opportunity to speak to the core audience and bring new people into the brand.” And signing Rose as an ambassador has helped bring credibility to those efforts, she said. “Justin has been an accelerant for that growth.”

The designs on the JR capsule, such as the mini roses and little golf clubs, will speak to the Bonobos customer, she believes. “Our guy loves critters,” she said. “So it gives us permission to play in that whimsical space.”

It also allows Bonobos to stand out from others in the golf arena. “On the course, it’s all navy and khaki or gray,” she said. “So it’s fun for us to play with color. And when Justin is on screen, it’s so recognizable.”

Although the partnership with Rose was the first foray for Bonobos into celebrity spokespeople, it won’t be the last, Onvural said. “This has been incredibly successful so we’re looking to see where else we can bring the Justin Rose playbook. It’s all about finding the right partner who exudes the brand and brings another level of credibility.”

Bonobos is looking to replicate that success by finding the right partner to promote its mainline business and she’s hoping to announce someone later this year.

“At the end of the day, it’s a relationship, a two-way street. And we got very lucky with Justin.”

Looking beyond golf, Onvural admitted business for Bonobos last year during the pandemic was “very challenging,” particularly for its more-tailored offerings, which represent some 40 percent of the overall mix. “But necessity is the mother of invention and our team did an extraordinary job offering alternatives for the guy working from home and spending more time outdoors,” she said.

That includes new pant options, such as models with elastic waists and repurposed fabrics as well as quilted vests and other more-casual pieces that were popular with shoppers, she said. “It forced us to move faster.”

Although primarily an e-commerce business, Bonobos does operate stores, which represent 30 percent of the overall business. During the time stores were forced to close, Onvural said the retail team was “redeployed” to work virtually with shoppers until the doors were able to open again. Promotions were also rampant.

But Onvural said that’s being changed. “We’re looking at this as a bit of a reset year,” she said. “This is a full-price business and we have product people are willing to pay for.”