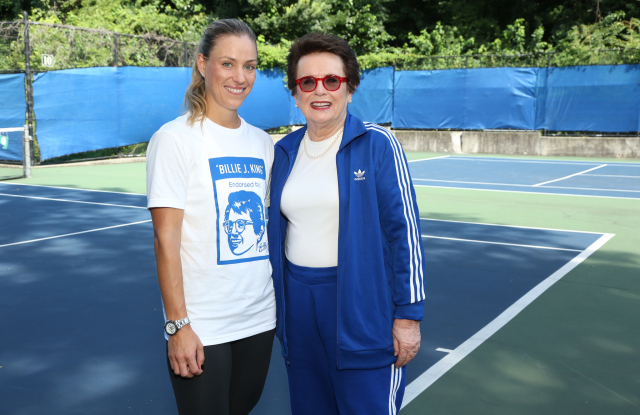 Billie Jean King was among the powerhouse athletes, who praised Naomi Osaka last week after she exited the Western & Southern Open in response to what the 22-year-old tennis pro called the “continued genocide of Black people.”

Years before King upset Bobby Riggs in the televised “Battle of the Sexes” in 1973, she crusaded for women to be recognized for their accomplishments and athleticism rather than their appearances. In an interview with WWD last week, King discussed the milestones that she has witnessed and how hints of that progress can be seen in tennis fashion.

Recalling how women at one time played tennis in long-sleeved, ankle-length dresses, King noted how today’s tennis wear reflects how much freer women have become through the years. She knows of what she speaks. In 1988, she and Cynthia Starr wrote a book that documents the sport’s progression in the past 150 years, “We Have Come a Long Way: The Story of Women’s Tennis.”

Before women’s pro tennis was established and players started to get paychecks for the first time in 1968, female players were given $14 a day in spending money to buy food, since they were amateurs, King said. “When we stayed in hotels, they gave us $28.”

The end of this month will mark the 50th anniversary of the Original Nine, a group of nine female players who agreed to $1 contracts with Gladys Heldman, the then-publisher of World Tennis magazine. That 1970 agreement created the first women’s professional tennis, as we know it today. “The reason we did it was, number one, so that any girl born in this world would finally have a place to compete. Number two, players would be recognized for our accomplishments, and not only our looks. And number three, players would be able to make a living playing tennis,” King said.

King landed her first endorsement deal in 1970 with Head, but that was only for sportswear, not racquets. Tennis fashion reflects societal changes through the years as far as women professional players getting paid, and women being able to get their own credit cards in the mid-Seventies without having a husband cosign it. All sorts of advances, such as Title IX in 1972, allowed for equal access for any federally subsidized activity, including sports. Whether it was the Great Depression, the suffragette movement in 1920 or Civil Rights in the Sixties, fashion reflects these times, King said. “Tennis fashion shows that we’re much more free, authentic and strong today than we were so restricted with corsets, long sleeves and very long skirts. When you take the 1800s until now, it shows the progress that we have made in society and in our world.”

Not counting on going to the U.S. Open, due to coronavirus safety precautions, King said this year’s tournament provides a lot of opportunity for different players to win. Noting how this year’s women’s singles champion at the U.S. Open will take home $3 million, King said that payout is due to the $1 deal the Original Nine agreed to. Total prize money in the WTA Tour last year was reportedly $179 million.

King noted how tennis players accounted for the top 10 highest-paid female athletes on the Forbes 2019 list, with Serena Williams amassing $29.2 million in total earnings. “Women’s tennis is the leader in women’s sports without any question. We have been since 1970 and that’s because we were able to risk our careers and the chance to play again,” King said. “Every time I see a player play, get a check, run around the court, be free, have a chance to make money and be appreciated, I go, ‘We did it — the nine of us did it.’ I get too much credit. We did it together.”

Many players have extended their reach for various charities as well as other causes, whether that be “their village, their city, their country or whatever. You never know how they are going to step up and lead,” King said. “When you look at all the basketball players who are helping out with Black Lives Matter. So we use tennis as a platform. There’s fashion involved, there’s money involved — there’s all kinds of things involved. The fans are everything.”

While they won’t be on-site fans at the U.S. Open this year, King said she was thrilled that the event is happening and organizers have “killed themselves to get the medical part right with the government — with [Gov. Andrew] Cuomo’s office and [New York City Mayor Bill] de Blasio. Everyone has been working since March. I just hope that everyone will do what they’re supposed to do and not leave bubbles.”

She continued, “If everyone does what they’re supposed to do, it will work. If they don’t, it will be a whole other story.”