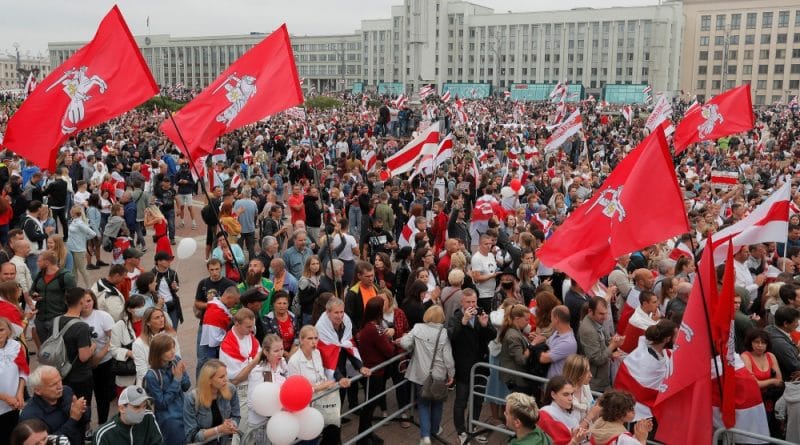 Demonstrators have massed in central Minsk after opposition leaders called for a huge rally to demand the resignation of Belarusian President Alexander Lukashenko, in the latest in a wave of protests against his disputed re-election earlier this month.

Lukashenko dispatched riot police to disperse rallies that erupted after he claimed a sixth presidential term in an election two weeks ago that critics say was rigged.

Thousands of demonstrators draped in red-and-white flags of the opposition on Sunday flooded Independence Square in the capital as a group of women protested against police violence ahead of the opposition’s “March of New Belarus”.

The defence ministry said it would intervene to protect World War II memorials, which it described as “sacred places”, and four metro stations in central Minsk were closed.

Solidarity rallies were also due in neighbouring Lithuania, where demonstrators planned to form a human chain from Vilnius to the Belarus border, three decades after residents of the Baltic states joined hands and linked their capital cities in a mass protest against Soviet rule.

The European Union has rejected the results of the presidential election that gave Lukashenko 80 percent of the vote. The bloc has also promised to sanction Belarusians responsible for ballot fraud and a police crackdown that saw nearly 7,000 people arrested and sparked gruesome allegations of torture and abuse in police custody. 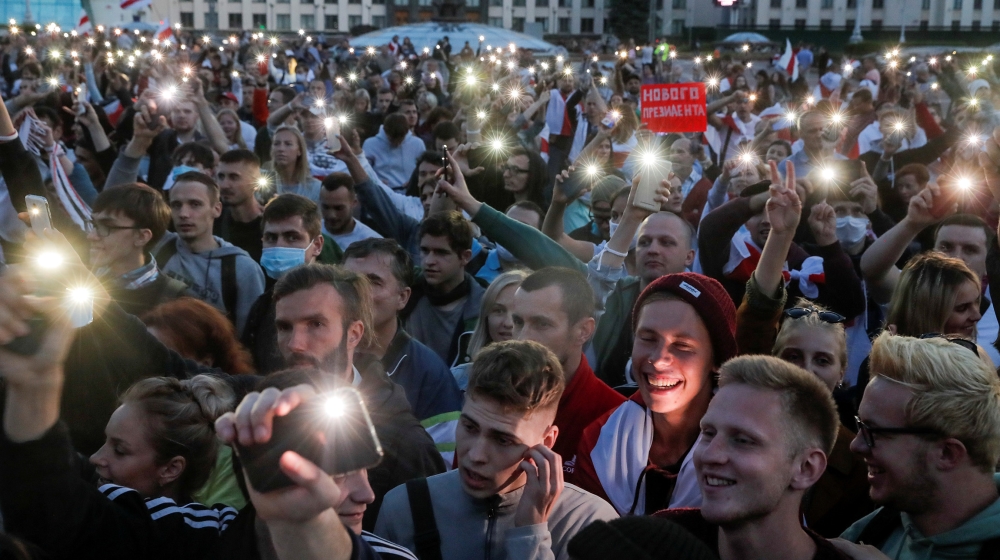 Lukashenko has brushed aside calls to step down, dismissed the possibility of holding a new vote and instructed his security services to quell unrest and secure the borders.

His opponents have organised strikes and the largest protests in the ex-Soviet country’s recent history over his re-election, with more than 100,000 people turning out in Minsk last weekend.

Yet fewer workers at state-run factories – usually a bastion of support for Lukashenko – have continued to strike, with activists citing pressure from the authorities.

Belarusian opposition leader Svetlana Tikhanovskaya has said her country’s people have changed and will no longer accept President Lukashenko.

Tikhanovskaya, who has fled to neighbouring Lithuania citing safety concerns, said Lukashenko should “step away” and “it is better for everybody”.

“The Belarusian people have changed. They will never accept the old authorities.”

The president has threatened to shut down production lines from Monday where workers have put down their tools.

Lukashenko’s military inspection this weekend came ahead of large-scale military exercises planned on the border with the EU between August 28 and 31.