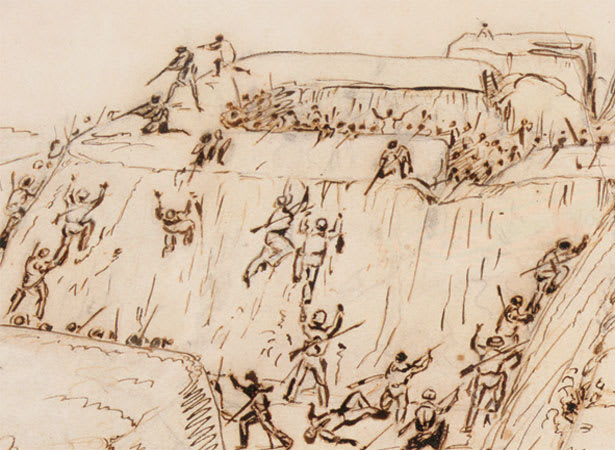 In 2015 I was regularly travelling south from my home in Auckland to Hamilton to visit my elderly mother. State Highway 1 took travellers alongside the huge slow-flowing Waikato River, through a series of rural towns, including Rangiriri. A large, rather faded nineteenth-century pub and a rural garage were its only apparent buildings.

I’d noticed the road sign saying Historic Site, and I knew, vaguely, that Rangiriri was the location of a famous battle of the New Zealand Wars in the 1860s. I’d never been keen to visit historic sites; they were for tourists, and stopping at them merely hindered a swift passage to my destination. And old battle sites, I imagined, were likely to be just empty paddocks.

One weekend, just for a look, I turned off the road at the sign. Only a few dozen metres off the main road was a parking area, with steps up onto a rise. I read the explanatory board. I could hardly believe it. This small hill was the point of resistance, the fortified pā from which the Waikato people had been defending their land against the incursions of the settlers. I had been driving right through the pā. I stood and looked down at the busiest highway in the country, where traffic hurtled north and south through the cutting.

I understood then that the highway to Hamilton was in fact a military road, the actual path that armed militia and imperial soldiers – including my British army officer greatuncles – had forced through into the Waikato region in 1863. A large contingent of Māori leaders and warriors from the area had attempted to halt the massive military push from Auckland down into the Waikato, and the seizing of tribal lands for Pākehā settlement. They had been defeated at Rangiriri with 180 Māori taken prisoner, and at least 50 killed. (The treacherous manner of the defeat is well documented by historian Vincent O’Malley.) Now every drive that I had to make through the pā felt like a repeated act of careless disdain for the Māori people who were defending their homelands and their livelihoods. (A wide motorway now skirts around the raised hill, closer to the Waikato River, and several pou stand proudly on the slopes of the old fortifications, marking the heroic defence.)

Such stories can be found almost anywhere in New Zealand. I can’t glimpse the majestic slopes of Mt Taranaki without remembering the plight of the Taranaki people who, in 1881, sat in peaceful opposition to what they called “te riri Pākehā” – the white man’s anger. The village at Parihaka was destroyed, their leaders imprisoned and their land sold to settlers. And when I play on a sandy beach by the peaceful Manukau Harbour with my grandson, I recall the day in 1864 when two gunboats arrived at the Manukau Heads. Soldiers disembarked under orders to destroy every canoe they could find – using explosives to wreck magnificent carved waka and small transport waka on the beaches. Land was confiscated, horses and cattle seized and houses burned. All because the government determined the Manukau people to be rebels, due to their whakapapa relationships with the Waikato people.

The area between Auckland and Hamilton is soaked in stories of enforced expulsion of peaceful communities of Māori from their own lands – all called ‘rebels’ simply for being related to tribes who resisted invasion by the troops. I came across this eyewitness description, written by John Featon in 1879, 16 years after the British troops’ attacks on the Waikato. With these words, the little town of Tūākau – not far off the main highway between Auckland and Hamilton – is transformed: “The village was situated on the edge of the river, and justly considered one of the prettiest and most flourishing in the lower Waikato. The land was good; potatoes, kumeras, and corn grew luxuriantly, and each year filled the storehouses of the natives to overflowing. A water mill close by ground their wheat into flour, and their fruit trees were loaded with apples and peaches, whilst the branches of the vine bending under their juicy weight trailed in the swift running stream. No wonder the natives were loth to leave their beloved home.

“The 65th [imperial troops][emerged] suddenly from the bush in the rear of the settlement, and surprised the natives, who, hastily collecting their [household possessions], moved mournfully down to their canoes, and with many tears and deep sighs paddled away.”

The Auckland airport is located on rich fishing grounds, with prohibitions on access to the waters around the airport preventing local Māori from reaching their fishing areas that are, in any case, polluted. On and on it goes. My Tauranga school was on Cameron Road – a main road into the city in those days. The name Cameron celebrates the man whose life’s great work, according to James Belich, was “to attempt to destroy Māori independence”. British Army Lieutenant- General Duncan Cameron led the military invasion of the Waikato, forcibly taking from Māori the best agricultural land in New Zealand.

The whole colonised world is like this, a series of monuments to colonial victors. What bothers me is not so much the naming, or even the monuments. Most troubling is our collective wilful amnesia; we do not know who Cameron was, or what happened at Rangiriri, or Tūākau, or a hundred other points along a river, up a valley, on a plain or a mountain. Unless we seek them out, our histories (and particularly the Māori part of those histories) remain unremembered by the majority of the New Zealand population. How can we Pākehā understand, let alone face, Māori anger, if we recognise nothing of its origins?

I started reading obsessively about the places I loved so much. It was not hard to find the well-researched reports of the Waitangi Tribunal, and the books by Māori writers like Patricia Grace, Atholl Anderson and Witi Ihimaera, and Pākehā writers such as Judith Binney, James Belich, Anne Salmond and Vincent O’Malley. In a mad tumble of reading and seeing, every landscape changed for me.

Now, wherever I travel, the violent and often unjust colonial history speaks from the gentle hills, the mountains, the river bends and the grassy paddocks, once bush, now drained and farmed. It is sometimes hard not to feel visceral sadness mixed in with keen curiosity.

Once, just to explore a new place, I drove with my sister through the Rūātoki valley south of Whakatāne, into the country of the Ngāi Tūhoe people. We followed the sealed road up the Whakatāne River, crossing (unknowingly) the hated ‘confiscation line’ – the arbitrary line drawn in 1866 by Pākehā surveyors to mark the government’s confiscation of most of the Bay of Plenty, including about half of Tūhoe’s best land (even though Tūhoe had not resisted the troops moving into the Waikato, the ostensible reason for the confiscation).

I knew that we should not be there, gawking. I turned my little Toyota in a muddy gateway, and turned towards the north, back over the confiscation boundary into the stolen land now owned by Pākehā farmers. When I told some of my Ngāti Porou friends, they laughed at my stupidity in venturing into someone else’s territory: typical Pākehā, thinking she can go wherever she wants, expecting a smile and a wave! They wouldn’t go down there.

I was forced to think about territory, and the way we Pākehā love to “explore the backblocks” or “go for a drive in the country”, without thinking anything of it. If there is a public road, we’ll drive down it to have a look, quite within our rights. Having forced roads through other people’s lands, we just assume we can travel uninvited anywhere on an innocent whim, enjoying the scenery, and waving – in our famously friendly way – at the people who live near the road. It’s ignorance of our history that allows us to behave like this.

Excerpted from the timely and perceptive memoir about “becoming and being Pākehā”,  This Pākehā Life: An Unsettled Memoir by Alison Jones (Bridget William, $40), available from bookstores nationwide.