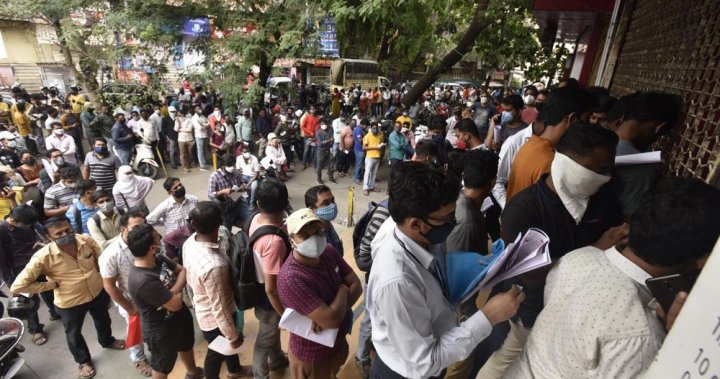 Ashish Poddar kept an ice pack on hand as he waited outside a New Delhi, India hospital for a black market dealer to deliver two drugs for his father, who was gasping for breath inside with COVID-19.

But the drugs never arrived, the ice that was intended to keep the medicines cool melted and his father died hours later.

As India faces a devastating surge of new coronavirus infections overwhelming its health care system, people are taking desperate measures to try to keep loved ones alive. In some cases they are turning to unproven medical treatments, in others to the black market for life-saving medications that are in short supply.

Poddar had been told by the private hospital treating his father, Raj Kumar Poddar, that remdesivir, an antiviral, and tocilizumab, a drug that blunts human immune responses, were needed to keep the 68-year-old man alive.

Like most hospitals and pharmacies in the Indian capital, stocks had run out. Desperate, Poddar turned to a dealer who promised the medicines after taking an advance of almost $1,000.

“It’s nearby” and “coming” read some of the texts that Ashish received as he waited.

“I wish he had at least told me that he isn’t going to come. I could have searched elsewhere,” the grieving son said.

India set another global record in new virus cases Thursday with more than 379,000 new infections, putting even more pressure on the country’s overwhelmed hospitals. The country of nearly 1.4 billion people has now recorded over 18 million cases, behind only the U.S., and over 200,000 deaths — though the true number is believed to be higher.

Death is so omnipresent that burial grounds are running out of space in many cities and glowing funeral pyres blaze through the night.

The few medicines known to help treat COVID-19, such as remdesivir and steroids in hospitalized patients, are scarce. The most basic treatment _oxygen therapy _ is also in short supply, leading to unnecessary deaths. Even hospital beds are scarce. There were just 14 free intensive care beds available in New Delhi, a city of 29 million people, on Thursday morning.

India’s latest treatment guidelines mirror those of the World Health Organization and the United States with a key exception: India allows mildly ill patients to be given hydroxychloroquine or ivermectin, drugs used for certain tropical diseases.

There is little evidence they work against COVID-19, and the WHO strongly recommends against hydroxychloroquine’s use for COVID-19 of any severity and against using ivermectin except in studies.

Read more:
How did India’s COVID-19 crisis get so bad?

While India is a leading producer of medicine globally, its regulation of drugs was poor even before the pandemic. And mounting despair is driving people to try anything.

Dr. Amar Jesani, a medical ethics expert, said many prescription drugs can be bought over the counter, including emergency drugs greenlit by Indian authorities for COVID-19.

“Hospitals and doctors are so used to having a `magic bullet’ that will cure you,” he said, explaining the use of unproven drugs as COVID-19 cases skyrocket.

When Suman Shrivastava, 57, was infected with the virus, her doctor in Kanpur city in Uttar Pradesh, India’s largest state, prescribed ivermectin. When her symptoms worsened, her doctor then asked her to take favipiravir, an antiviral, though it is unproven against COVID-19.

Her nephew, Rajat Shrivastava, said that drug was hard to find but he eventually located it in a pharmacy which was rationing its supplies by giving a single strip daily to each patient. He eventually bought extra doses from an online volunteer on Twitter and now his aunt is doing well.

Dr. Anant Bhan, who researches public health and ethics in the city of Bhopal, warns there are risks in the do-it-yourself approach. Bhan said antivirals and steroids should be taken in a hospital setting due to the risk of side effects. And drugs that are life-saving at one point could be harmful at another, depending on timing and how severe the symptoms are.

“It’s scary because these aren’t vitamin pills,” he said.

Black market prices for remdesivir, which is produced by several Indian companies, have increased up to 20-fold to about $1,000 for a single vial, said Siddhant Sarang, a volunteer with Yuva Halla Bol, a youth activist group which is helping patients find medicines and hospital beds.

In September, federal data showed that Indian drug makers had made over 2.4 million vials of the drug. But when cases dipped in September, companies destroyed much of their expired stock and production declined.

India was then slow to respond to the uptick of infections in February, and production was only scaled up in March. Earlier this week, Merck announced a deal with five makers of generic drugs in India to produce molnupiravir, an experimental antiviral similar to remdesivir, which is given by IV, but in a more convenient pill form. It’s unclear when that might become available.

Authorities have started cracking down on the dealers. In New Delhi, for instance, raids are being carried out on shops or people suspected of hoarding oxygen cylinders and medicines.

Despite all the desperate efforts, medicines that work remain unavailable to many.

Virus-blocking antibody drugs, widely used elsewhere, aren’t yet authorized in India. Roche, which works with Regeneron Pharmaceuticals on marketing one such treatment, said Wednesday it is negotiating with India to speed up emergency use. American drug maker Eli Lilly, which makes a similar treatment, said it is in discussions with the Indian government.

Stuti Bhardwaj, 37, went from one pharmacy to another in southern New Delhi this week. Her parents, both in their seventies, were not able to get tests but showed symptoms of COVID-19 and had dangerously low oxygen levels. A doctor advised a host of medications, including hydroxychloroquine.

She eventually found it and bought it, aware it was unlikely to work.

“My parents are dying,” Bhardwaj said. “I am desperate.”