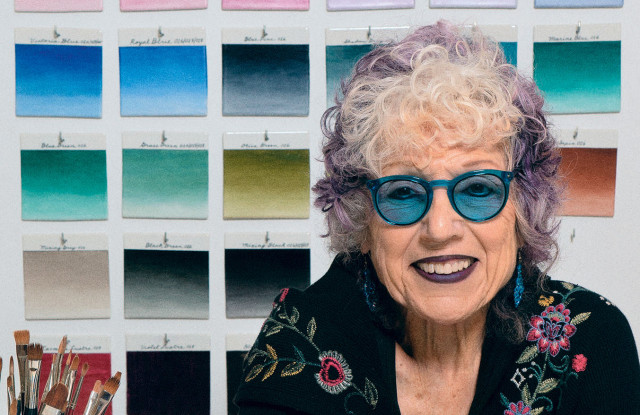 PARIS — Judy Chicago is back for a second collaboration with Dior – and this time, you can walk away with it.

The artist designed the monumental set for Maria Grazia Chiuri’s spring haute couture show in January: a tent shaped like a goddess figure, filled with 21 banners embroidered with feminist messages. Now she is one of 10 artists tasked with customizing the Lady Dior handbag for the fifth edition of the Dior Lady Art project.

“I have actually not thought much about purses,” Chicago confesses in a telephone interview from Belen, a small town 35 miles south of Albuquerque, N.M., where she and her husband, the photographer Donald Woodman, live and work in a historic red-brick hotel that once served as a boarding house for railroad workers.

“Usually, I end up with one purse and I use it for everything,” she adds. “The problem with purses, particularly evening purses, you can’t get anything into them: either purses are so big, you can’t find anything, or they’re too small and they have no room. So I think the designer purses could use a little more thinking.”

Still, the feedback from her initial collaboration with Dior in January was enough to convince Chicago to try her hand at something more portable.

“When Dior sent us the press [clippings] book, it was 1,000 pages long and from all over the world, which meant that my work reached a global audience. And, you know, I never thought about fashion as another possible mode of communicating to a wide audience,” she says.

“I’m not an artist who is only interested in decoration. I’m interested in conveying meaning, and so I realized I could do that with a purse,” Chicago adds. “Whatever technique I use, I want to make a contribution.”

The artist is best known for her Seventies installation “The Dinner Party,” which highlights the role of women in history and culture through elaborate dinner table place settings, dedicated to figures ranging from Boadicea to Virginia Woolf, featuring hand-painted plates depicting elaborately stylized vulvas.

Dior has adapted three of her spiral paintings from the Seventies for the project, using a dichroic treatment to give the surface of the bags a metallic or iridescent sheen. The works chosen are “Let It All Hang Out” and two paintings from her “Great Ladies” series, “Queen Victoria” and “Christina of Sweden.”

“And I said that the titles of the paintings have to be on the bottom of the purse. And why did I say that? Because I thought, this is another vehicle for teaching women’s history,” she explains.

“My ideal client is walking down the Champs-Elysées or Madison Avenue with this big purse — because the ‘Victoria’ purse is quite large — and somebody says to her, ‘Oh, my God, that’s incredible. What is it?’ And she says, ‘That’s an interpretation of Judy Chicago’s painting of Queen Victoria.’ And they go home, and they look up the woman and they discover all about her,” she explains.

Chicago hasn’t had time to test her theory, since her samples have been whisked away for a shoot. “Although it would be absurd, if you saw where I live, there’s no way I could take it for a walk here. We live in this little, tiny, semi-rural town. It would definitely be wasted,” she says with a laugh.

She will present the bags alongside the banners from the Dior show in an exhibition at the Jeffrey Deitch gallery in New York beginning on Nov. 20. They will subsequently head to the National Museum of Women in the Arts in Washington, D.C., for its 2021 gala honoring Chicago and Chiuri.

“So what we started in Paris is having a really long life. I think that’s fantastic,” she enthuses.

The bags will officially launch early next year in a selection of Dior boutiques worldwide. Each design is limited to 100 copies, with prices ranging from 4,000 euros to 25,000 euros.

Chicago, meanwhile, is keeping up the momentum. At 81, she has never been busier. The Museum of Arts and Design in New York City will honor the artist with an online ball on Oct. 15 featuring a musical performance by Rosanne Cash and a special appearance from the Alvin Ailey American Dance Theater.

She was supposed to have her first retrospective this year at the de Young museum in San Francisco, but it’s been postponed until November 2021. And she is creating one of her large-scale smoke sculptures for the opening of the Toronto Biennial of Art in September 2021.

In the midst of all this, Chicago is writing her memoirs for Thames & Hudson. “For the last six months, I’ve been hard at work on a new book called ‘The Flowering: The Autobiography of Judy Chicago.’ It’ll be out in July of 2021. It’s going to be published on my birthday, July 20, and it’s a kind of summing up of my life,” she explains.

“I just have a lot to say, I always have. And it’s been hard for me. For a long time, I didn’t fit in, because nobody wanted to hear what I had to say,” she says. “Now, if I do a public lecture, usually somebody in the back says, ‘Speak up, we can’t hear you!’ and I burst out laughing. For most of my career, people told me to shut up.”