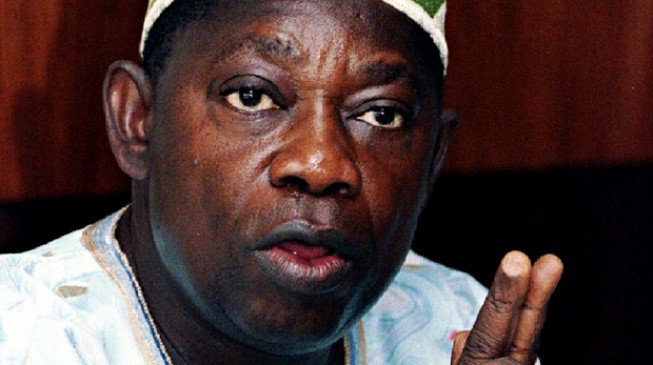 Politics
June 13, 2020June 13, 2020 Mary 0 Comments
LinkedInFacebookTweetPin
LiveChat will greatly increase the number of your satisfied customers. I've already tried it and I can recommend it as a go-to customer service tool! Sign up today for a free trial!

n 2018, President Muhammadu Buhari recognised late Moshood Kashimawo Abiola, the undeclared winner of the June 12, 1993 election with the highest honour in the country – Grand Commander of the Federal Republic of Nigeria (GCFR). While it remained unarguable to the public that he won the election, he got his hair shaved in his absence despite his romantic relationship with military dictators of that period.

To ordinary Nigerians, Mr Abiola was known for his economic power and for being a philanthropist. If not for him, many elites that are making difference (s) in the world currently may not be opportuned. But according to history, late Abiola was able to use his wealth to bring smiles to the face of many and cleaned up the sorrow of many families. Arguably, his deeds to private lives of Nigerians engineered his success and not his outstanding performance towards a better nation.

He was one of the most successful business moguls in the history of Nigeria after he left his position as deputy chief accountant at the Lagos University Teaching Hospital from 1965 to 1967. The brilliant M.K.O owned quite a number of companies and later found himself as the comptroller of International Telephone and Telegraph (ITT), Nigeria, Limited. Soon he became the vice president for ITT’s Africa and Middle East branch.

Lo, despite all his riches and all acquired as then Africa’s star boy, he was ambitious and wanted to be Nigeria’s number one citizen, an effort not against morals of a man of such standard anyways. But, his inability to dine with the devil and leave the table uninjured could not help him. He ate and dined with those that matter in the military and the political sphere but he never knew, they hid the clipper for barbing his hair in the corner without his notice.

Did Abiola sponsor any coup? While this question heap around the neck of many Nigerians like ants surround cube of sugar, it remained evident that the former Aare Onakakanfo was close to late Sani Abacha, Ibrahim Babangida and many other uniform rulers. In fact, reports have it that the Abeokuta born politician allegedly said he had helped Babangida on several occasions and that the military dictator would be happy to have him (Abiola) as his successor.

Soon, late Abiola showed interest in contesting for the 1993 election as president of a country formerly called Niger Area and later Nigeria. He said then that: “The presidency is right in the centre of everything. My wealth is decreasing because my charities are increasing. Aside from that, Nigerians are not only poor as they were before, they are becoming poorer. My charities will not eliminate poverty but my presidency will”.

This message made Nigerians noticed hope in Abiola and fortunately for him, his campaign posters back then carried “HOPE 93″ as slogan. Despite the fact that over 250 presidential candidates were screened by the National Electoral Commision (NEC), late Abiola sailed through as the candidate of the Social Democratic Party (SDP) alongside Babagana Kingibe – his running mate. The duo contested against the National Republican Convention (NRC) candidate, Bashir Tofa.

Behold, late Abiola won by a landslide in the elections widely reported as free and fair. To further prove his level of trust among Nigerians, Abiola won in his opponent ward at Kano. Hence, a sign that his acceptability was nationwide. It was neither regional nor local. Abiola’s name was written bold in air with even the blind testifying to the fine writing but unfortunately, the Egba man never made it to be listed among Nigeria’s first citizens.

Regrettably, despite his romantic affairs with Babangida, the military dictator wasn’t ashamed of betraying his ‘friend’. He took the decision he considered best for the ‘khaki’ boys. Even though a group, Campaign for Democracy in defiance, released the ‘election results’, declaring Mr Abiola as the winner, with 19 of 30 states pockets. It was on June 26, that Babangida voided Abiola’s hope.

Not happy with the decision of the then government, Nigerian took to the streets to protest against the ugly pronouncement and that filtered into 1994 until Babagida swallowed his pride and bowed to pressure by vacating office for Ernest Shonekan who later got removed by a man who stole all Nigeria’s treasuries to some western countries of the world. The youth of today referred to him as a dead man who continues to give back to his society. Without disturbing his grave with too many accolades so that we won’t disturb his rest – thinking Nigeria needs more money, we shall disclose his name, he was named Sani Abacha. He took over power on November 17, 1993.

Having noticed the way things were structured and another planted malpractices, Abiola took the bull by its horn, he demanded what was his – he made efforts to claim his mandate – ran to the colonial masters who could not help. It was the fight for his right that led him to prison. He was a president that never had his name in current affairs as Nigeria’s past president.

Abiola returned to Nigeria in June 1994 to declare himself the president, a statement that led to him being charged for treason and remained in jail for four years and had his wife Kudirat, assassinated while campaigning for her husband’s release. Days before his release in 1998, Mr Abiola collapsed and died from alleged heart failure during a visit from a U.S. delegation.

Since Abacha had died in office about a month earlier, Abdulsalami Abubakar became the next leader who restored Nigeria to a democratic rule and since then Nigerians have been calling on the government for a post-humous recognition for the late Abiola. None listened until 2018 when Mr Buhari took the bold step.

Sad enough, from what is obtainable in the country as of the time of this piece, it is not incorrect to say that Nigeria is far from democracy. While the characteristics of any democratic nation is elective representation, that is yet to be achieved in Nigeria as all elections since 1999 were marred with all sorts of irregularities including rigging, buying of votes, violence, and the latest of all ‘inconclusive elections”.

When will Nigeria get things right? A question for the political elites with conscience.