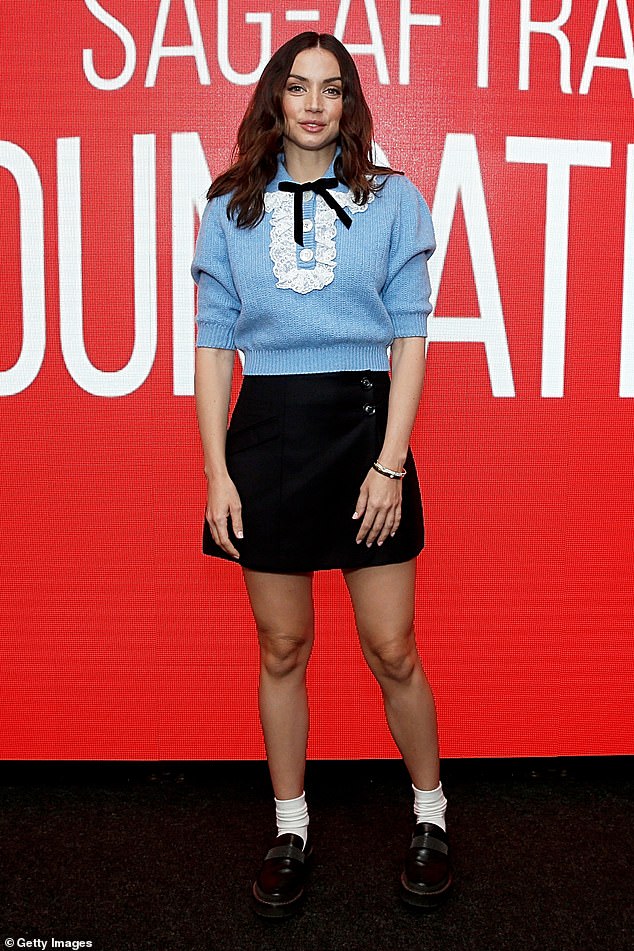 It certainly has been a busy week for this Cuban actress as she promotes her new film that focuses on the life of Hollywood blonde bombshell Marilyn Monroe.

On Tuesday afternoon brunette beauty Ana de Armas was seen attending the SAG-AFTRA Foundation Conversations: Blonde where she chatted up the movie which promises to take an honest look at the Gentlemen Prefer Blondes actress. The event was held at SAG-AFTRA Foundation’s Robin Williams Center in New York City.

This come after the star told AnOther magazine that she asked Marilyn Monroe ‘permission’ to play her when visiting her Los Angeles grave. 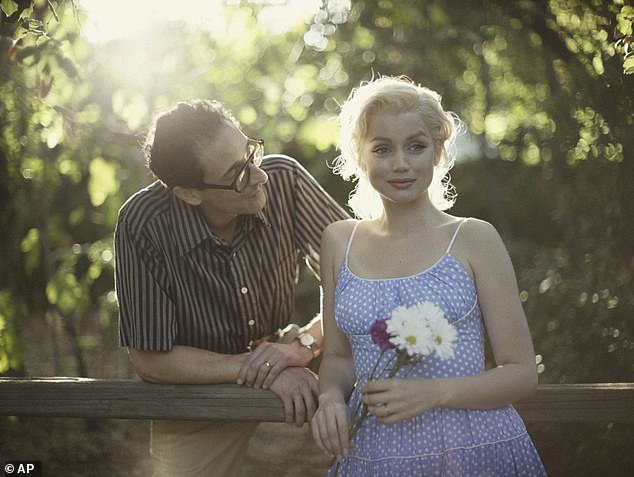 Ana went for a more demure look in a round neck baby blue top.

The knitted sweater had a beige lace lined collar with three white buttons up the front and a sweet bow in black up top.

She added a black mini skirt that revealed her toned and slender legs. Black shoes and white socks finished off her look.

The cover girl wore her dark hair down in soft waves and had on shiny lip gloss.

The film is based on the novel of the same name by Joyce Carol Oates and is due for release on September 28.

Also on Tuesday she talked to AnOther magazine, sharing she asked Monroe permission to play her. 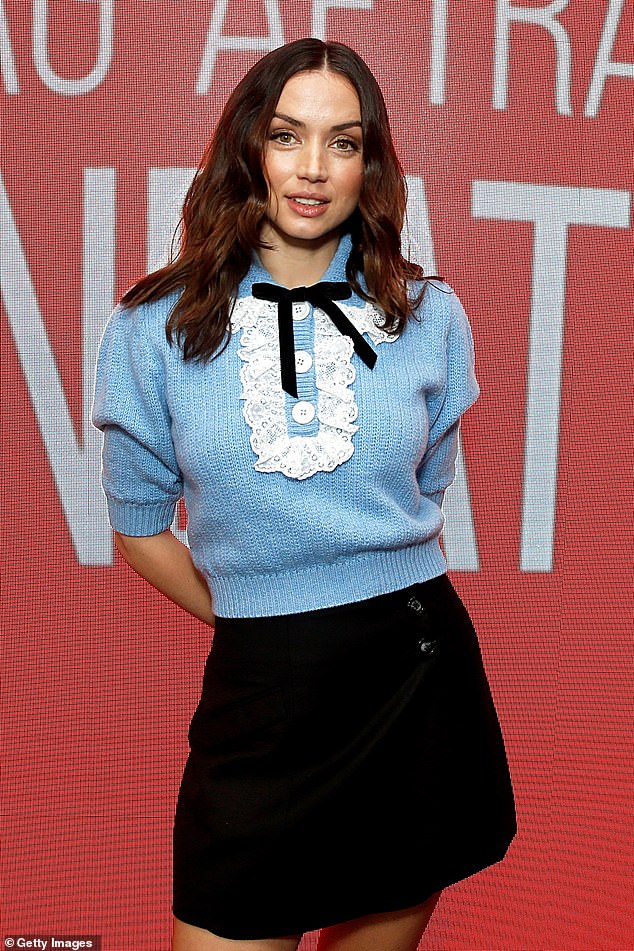 Blue mood: Ana went for a more demure look in a round neck baby blue top. The knitted sweater had a beige lace lined collar with three white buttons up the front and a sweet bow in black up top

‘We got this big card and everyone in the crew wrote a message to her. Then we went to the cemetery and put it on her grave,’ she said. ‘We were asking for permission in a way. Everyone felt a huge responsibility, and we were very aware of the side of the story we were going to tell — the story of Norma Jeane, the person behind this character, Marilyn Monroe. Who was she really?’

She also said Blonde uses real incidents, but tries to fill in the moments in between what’s known on the public record.

‘It’s about the things we haven’t seen, the moments when the cameras aren’t flashing or rolling, when Marilyn is not ‘on’,’ said the Cuban-born beauty.  ‘It’s fiction. We don’t have proof this happened. But it fills the gaps in the things we already know with a version of events that we should at least consider.’

The Knives Out star admitted she didn’t seem the likely candidate to be cast when she auditioned for the role about one of the most famous women in the world.

‘But of course I went for it, because I love challenges, and I knew that emotionally I could get there,’ she explained. 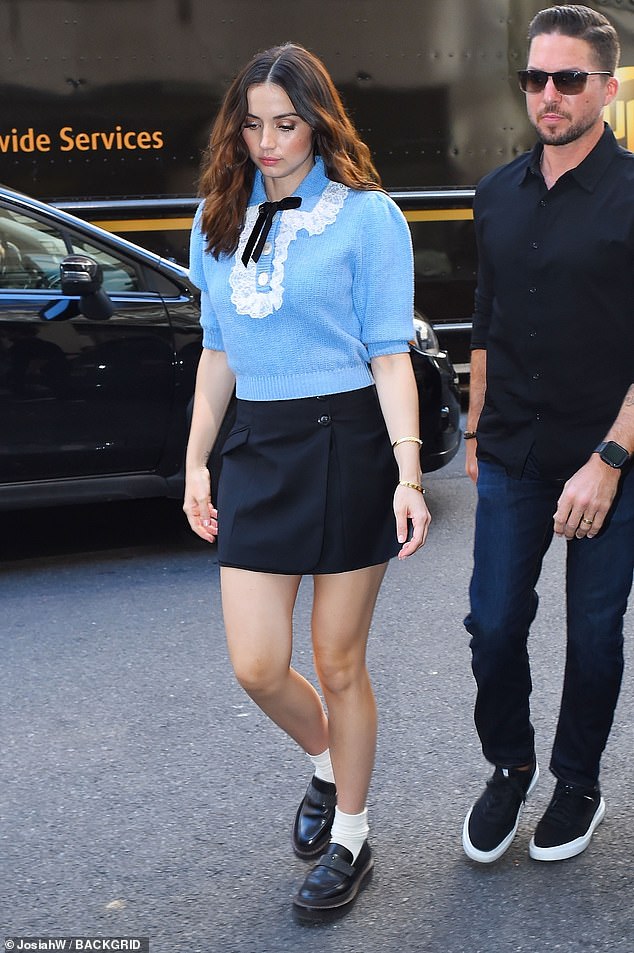 Schoolgirl cool: She added a black mini skirt that revealed her toned and slender legs. Black shoes and white socks finished off her look

‘I didn’t know if the hair, the make-up would, but I understood what we were trying to say. Andrew called me after the audition and said, “It’s you. It has to be you.” But then we had to convince everybody else.’

The Gray Man actor’s Cuban accent would have traditionally kept her from the job, but a voice coach was hired to help her learn to speak like Marilyn.

‘Marilyn’s voice, her expressions, were a consequence of the speech classes she took herself, of her insecurities, of her not having any boundaries and letting people in, of playing this part of having to be rescued all the time.’

In studying the star, Ana learned to share her vulnerability.

‘So I had to know what she was thinking and feeling every time. Because the way she rounded her lips for the ‘O’s, or how much of her lower teeth she would show, what her eyebrows were doing, all these expressions were a consequence of Marilyn in survival mode. They were tricks that she was pulling in desperate circumstances.’ 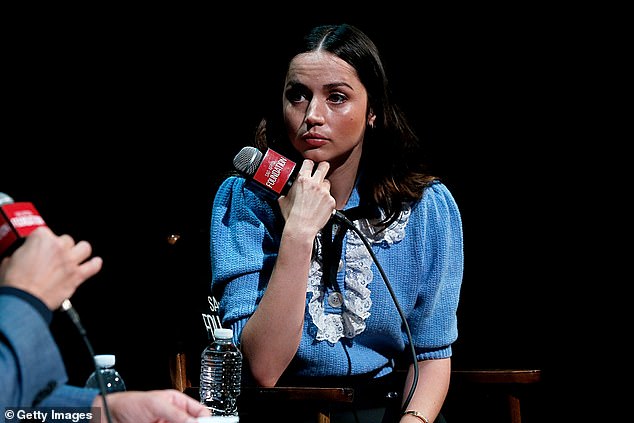 Unfussy: The cover girl wore her dark hair down in soft waves and had on shiny lip gloss 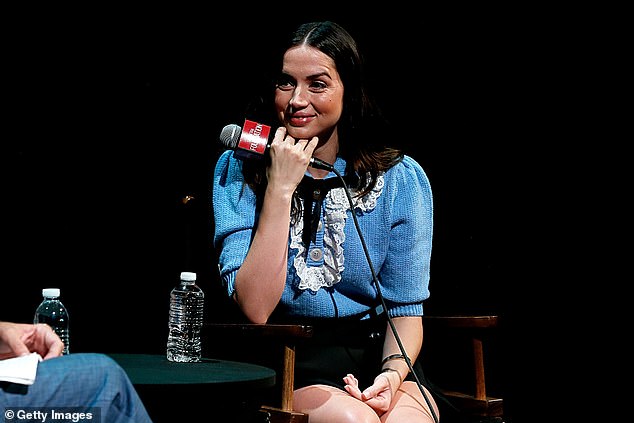 Thinking hard: She smiled as she paused during the discussion on stage

This comes after she said last week that she broke down in tears after her film Blonde received a 14-minute standing ovation following its world premiere at the Venice Film Festival in Italy.

The No Time to Die star plays late movie icon Marilyn Monroe in the new movie about her life and it was screened for the first time at the festival on Thursday (08.09.22) and received a rapturous response from the audience who applauded for more than 10 minutes as the film’s star wept. 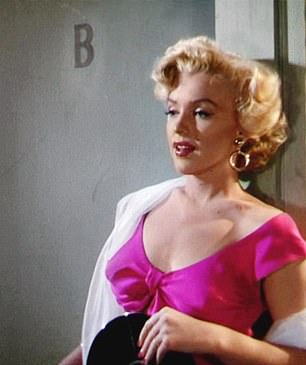 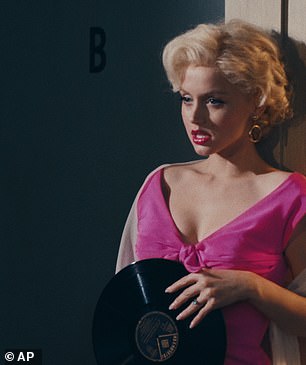 Real and reel: Marilyn, left, in the film Niagara, and right Ana as Monroe in the film 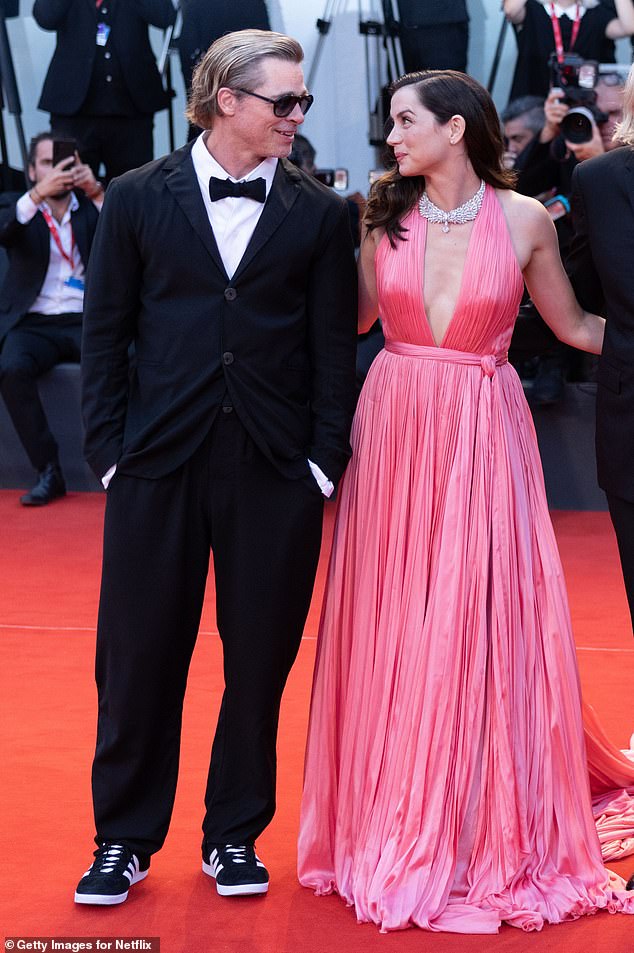 Ana spent nine months working with a voice coach in a bid to perfect Marilyn’s accent, and she recently told The Times it was a tiring process.

She said: ‘It took me nine months of dialect coaching, and practicing and some ADR sessions [to get the accent right]. It was a big torture, so exhausting. My brain was fried.’

After the trailer for the new movie was released, there was some criticism of Ana’s accent online and the actress spoke out to defend her performance.

The actress – who only learned to speak English in 2015, said: ‘ I feel like whether you’re a Cuban or an American actress, anyone should feel the pressure.

‘My job wasn’t to imitate her. I was interested in her feelings, her journey, her insecurities, and her voice, in the sense that she didn’t really have one.’ 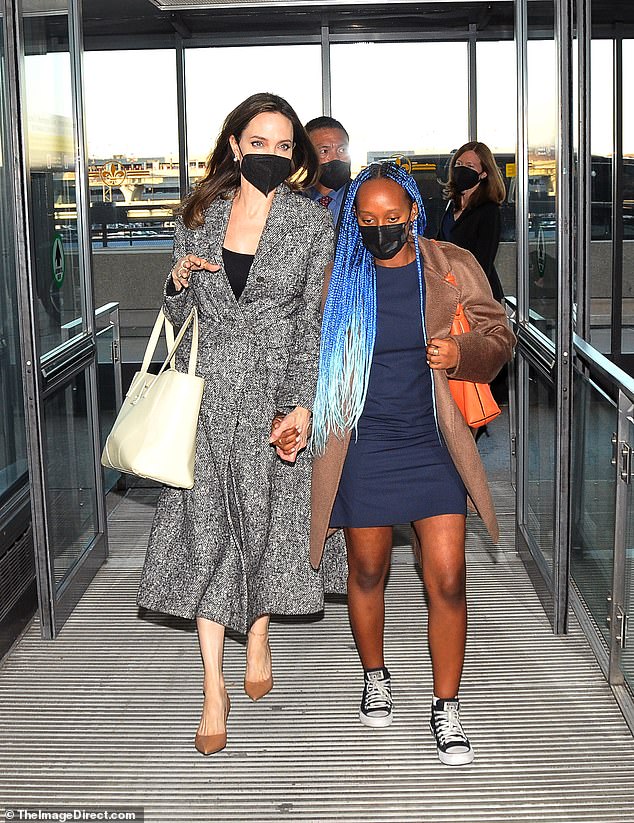 Angelina Jolie jets out of Washington D.C. with daughter Zahara, 17