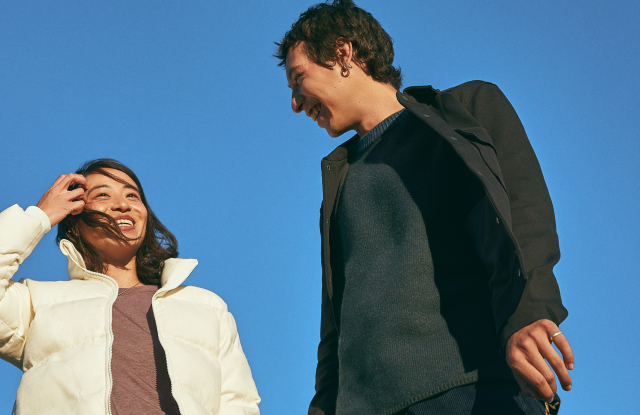 
Allbirds is finally taking the plunge into apparel.

The four-year-old brand, which has raised more than $200 million in funding as well as the consciousness of its customers with its sustainability message, will launch a tight capsule of T-shirts, sweaters and puffers starting today at Allbirds’ 21 retail locations in the U.S., Europe and New Zealand as well as online.

Although the brand previously dabbled in apparel by offering socks and underwear, this is its first true apparel collection, which it is touting as the world’s first full range of net-zero clothing labeled with its climate impact.

Like its footwear and other products, the Allbirds apparel collection was created from innovative textiles and each piece is labeled with its carbon footprint. The tag line for the collection is “apparel with purpose.”

Tim Brown, cofounder of Allbirds, said the brand has “high expectations” for the collection, which it has been working on for the past few years. When the brand launched socks last summer, it maintained its philosophy of innovating from the yarn up, he said, “which was incredibly hard to do.” But once Allbirds created Trino, a proprietary blend of merino wool and fibers from eucalyptus trees, “it opened up the idea of making other items.

“Does the world need another T-shirt?” Brown asked. “No, unless it’s better.”

Adding that Allbirds had no intention of just putting its logo on something that didn’t meet its high standards for sustainability, the company created TrinoXO, which is made from discarded crab shells that it used to make the T-shirts. The shirts retail for $48, are available in six colors for both men and women and have a carbon footprint of 7.1 kg for the men’s shirts and 6.3 kg for the women’s.

TrinoXO allows clothes to stay fresh longer without relying on extractive materials such as zinc or silver, the company said. 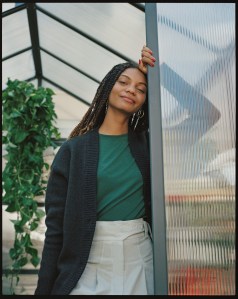 The women’s T from Allbirds.
ICON

The wool cardigan, which retails for $145, uses New Zealand merino wool, as does the sweater, which sells for $135. Both are available in three colors and their carbon numbers range from 16.4 kg to 26.3 kg. 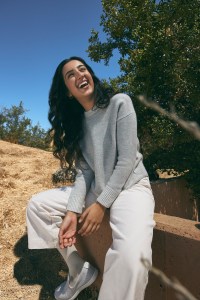 The sweater is made from merino wool.

The Trino puffer is available in three colors and retails for $250. The carbon number is 25 kg for men and 20.9 kg for women. The company said that most other brands use synthetic fabrics, fluorine-based water repellents and down fill. But its water-repellent coating is made of merino wool and Tencel blend and the coats are filled with recycled polyester. 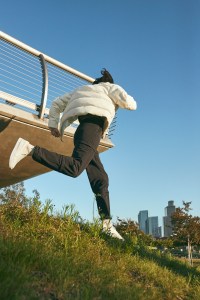 Brown said that rather than create a full collection immediately, Allbirds opted to focus on “iconic items, and then go deep.” Because the brand is vertical, the company was also able to keep the prices reasonable.

“People want great product and a great experience,” he said, “not just sustainable product. The customer doesn’t want to compromise on quality and fit.”

Yet the Allbirds message of doing good is still unmistakable. “The future of fashion is one that feels better, on you and the planet,” the company said. “And in 2020, it’s become more clear than ever that the most modern way of life is to live one closer to nature.”

Brown, a former professional soccer player from New Zealand, said that eventually the brand expects to expand into other essential apparel pieces, but with the same intent: “There will be more, but we won’t chase trend; we’ll go deep and narrow.”

He would not venture a guess on how large the apparel category could eventually grow for the brand. “It’s an enormous category,” he said. “We’ll start small and if we can nail the product — and the customer will tell us that — then we’ll see.”

Speaking about the company as a whole and its performance during the pandemic, Brown said Allbirds “came through a difficult period incredibly well. We were blown away by the response even with our retail stores shut.”

He said the brand’s new running shoe, which launched in April, was “wonderfully received.” Its move to further increase its presence internationally by expanding into Korea and Japan has also been encouraging, while the China business is also strong, he said, adding that the brand experienced “great success” during the recently completed Golden Week.

He did shoot down the idea that Allbirds is considering going public, saying there are “no plans for that. We’re going to continue to focus on product. We’re not even five years old yet. The apparel launch is big and our international business is interesting.”

And as the world manages through and eventually comes out of the pandemic, Brown is expecting a further uptick. “We’re feeling a shift in demand as the pandemic has [heightened] the health and wellness message. There’s a real level on interest in carbon, how to use it and how to make better choices. So our ability to continue to invest in that is full of potential for us.”

The California-based Allbirds at the end of September revealed a Series E funding round of $100 million, led by Franklin Templeton alongside T. Rowe Price, Baillie Gifford, TDM Growth Partners, Rockefeller Capital Management, and other new and returning investors. The certified B Corp, Public Benefit Corporation and carbon-neutral business said it would use the funding to enter new product categories and continue to innovate on sustainable materials. All told, the brand has raised more than $200 million since its launch in March 2016. 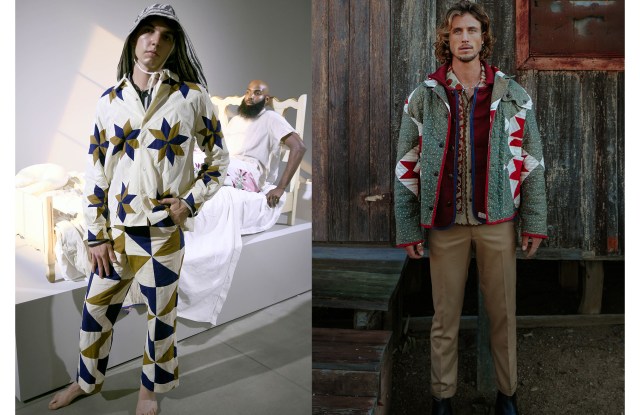 What’s next for wellness’ mushroom obsession 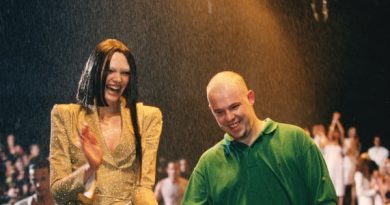