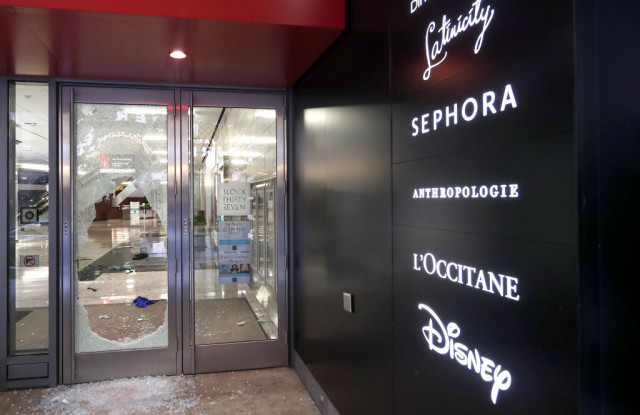 Still reeling from extensive looting that led to more than 100 arrests, Chicago retailers are regrouping and trying to figure out reopening plans.

Dior, Nordstrom, Jimmy Choo, Yves Saint Laurent, Louis Vuitton, Nordstrom, Macy’s, Bloomingdale’s, Nike, Sephora and Oliver Peoples were among the more than 200 retailers in the city’s central business district that had their property damaged Monday night. Most major retailers and smaller ones in that area remained closed Tuesday. In addition to dealing with millions of dollars worth of losses, impacted businesses are exploring how they can appeal to city officials to ensure safety and security before they reopen.

A spokesman for the Chicago Police Department said Tuesday that there had not been any reports of civil unrest Monday night. To try to deter people from congregating and in an effort to prevent further looting, city officials implemented restricted access Monday downtown from 8 p.m. until 6 a.m. That nightly edict, which is not a curfew, will remain in place for the foreseeable future.

Area businesses were advised Monday by the city’s department of business affairs and consumer protection commissioner to:

* Review insurance policies to ensure adequate coverage and “to understand the steps that you need to take in the event there is property damage.”

* Call 911 in the event of an emergency to help direct police quickly to targeted areas. Any hired security should work in tandem with the Chicago Police Department and “not take matters into their own hands.”

During an emergency 100-person meeting Monday organized by The Magnificent Mile Association with board members and key property stakeholders, participants discussed coordinating a united appeal to city officials so that “guaranteed safety and protocols for policing” will be in place before businesses reopen, according to Adam Skaf, an MMA spokesman. The need for “vigorous and vocal” outreach to the offices of Chicago Mayor Lori Lightfoot and CPD Superintendent Doug Brown and other city officials was made loud and clear, he said.

”We can make certain assurances to the city as an association. But if they are hearing directly from the businesses that generate the much needed tax revenue that they will not reopen or that their employees do not feel safe, or [that there is] no consumer confidence…,“ Skaf said. “Property owners are ready to roll up their sleeves and get very vocal with the city.”

On Tuesday, some stores were still picking up the pieces. Sephora, which had looting in its State Street store, closed four other Chicago units Monday as a precaution — all of which except the damaged one have since reopened, a spokeswoman said. Adidas also closed two stores Monday but reopened them Tuesday, as had H&M. Some stores — like Nike — had only reopened in recent weeks, due to COVID-19-related restrictions and the Chicago’s first wave of looting that occurred in early June around the mostly peaceful protests in the city at that time.

The financial impact from Monday’s unrest may be the breaking point for some retailers, especially independent ones, according to Skaf of the MMA, a group that represents 650 businesses, including about 75 retailers. “This could be the end for some of our members. There are finite resources even for large companies and corporations, as they’re assessing their budgets nationwide. Restructuring is happening at classic department stores like Saks and Neiman Marcus. What’s not to say [that will affect] individual retailers as well? We’re concerned.”

Retailers and Chicago property owners are also being encouraged to reach out to Cook County state attorney general Kim Foxx to call for the prosecution of those that have been arrested for looting and burglary. The retailers that had property damaged this week, who participated in Monday’s emergency MMA meeting, were urged to show up for court appearances related to their losses, Skaf said. “It’s one thing to arrest someone and it’s another thing to follow through, not drop charges and really pursue these felonies vigilantly.”

Lightfoot, Brown and other city officials have recently sparred in the media with Foxx over the implication that her office’s handling of the earlier looting cases empowered those individuals. From late May until early June, about 325 people were reportedly arrested on felony charges related to the civil unrest that followed the killing of George Floyd while under Minneapolis police custody. Foxx’s spokeswoman declined to confirm that number Tuesday.

The most common charge for looting is burglary, a Class 2 felony that carries a sentence of three to seven years, according to Foxx’s spokeswoman. That charge, as well as Class 3 and 4 ones, are probational. Asked about calls by some business owners to prosecute looters, the spokeswoman said, “The CCSAO has been and will continue to prosecute those cases brought to us by law enforcement.”

Monday‘s early morning violence and looting transpired after Chicago police officers responded to reports of a man with a gun, who made chase and fired at officers, according to the CPD’s Brown. The 20-year-old suspect was later arrested and faces attempted murder charges. A crowd later gathered downtown, prompted in part by misinformation and Chicago police learned of planned looting, Brown said in a press conference Monday.

While The Shops at North Ridge remained temporarily closed Tuesday, others had reopened. After closing Monday as a precaution, the Chicago Ridge Mall, a shopping center with stores like Kohl’s, H&M, Hollister, Old Navy and Express reopened Tuesday. Foot traffic was “pretty busy,” a CRM spokesman said.

While most MMA retailers were taking a wait-and-see approach to reopening, a few indicated to Skaf that they may reopen as early as this weekend. Another emergency meeting is expected to be held by the MMA this week.

Having recently been using the MMA social media channels to welcome shoppers back to the neighborhood, Skaf said he is now giving any posts great consideration given this week’s events. “We’re going to have to dig ourselves out of the hole again, when it comes to consumer confidence,” he said.